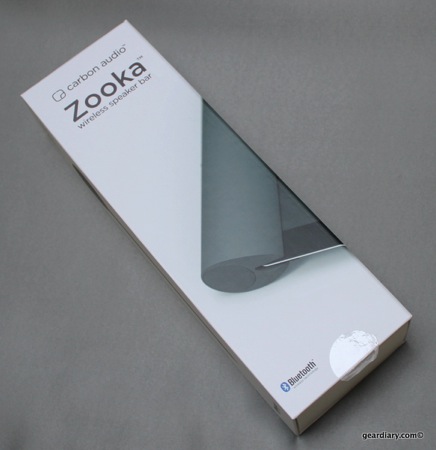 The Zooka Wireless Speaker Bar for Tablets and Laptops

This is our review of the Zooka. Before reading further please say that out loud five times fast. Now please say it five times slowly.

Okay enough of that. Let’s dig into this successful Kickstarter project. The people behind it, Carbon Audio, were looking to raise $25,000 dollars. By the end of the campaign they had 678 backers and had raised $70,540. Neither Judie nor I backed the Zooka, but now the Bluetooth speaker is available online and through outlets such as Apple’s online store.

The Zooka is a Bluetooth speaker with a difference. (And I don’t just mean the cool name.) It can be used alone, used with a tablet or used with a laptop. With each application it enhances the sound significantly. Let’s take a look at the Zooka on video.

As you can see from the video, I like the Zooka Wireless Speaker Bar.

The Zooka comes simply packaged with the speaker presented as soon as you slide the inner box out of the cover. The only other items in the box are a USB to microUSB charging cable and a simple instruction manual. Strikingly the company opted not to include a 3.5mm to 3.5mm cable. That surprised me since the Zooka does have a 3.5mm Aux in jack for playing music through a wired, rather than wireless, connection. I have dozens of the cables lying around, but most people purchasing a Zooka won’t; I think it is a mistake.

The Zooka includes one additional accessory — a simple metal bar comes stowed inside the Zooka. Pull it out and screw the bar into the reinforced hole in the back and you get a usable, albeit one position, stand for your iPad. 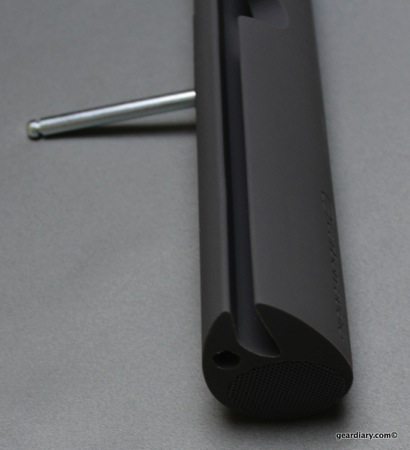 When the Zooka is set up in this manner it looks a bit like the Element Case Joule iPad stand. This stand however has two 30mm speakers, one on either side; it offers 8 hours of battery life per charge, and it offers up to 33 feet of wireless streaming from the audio source to the Zooka. The Joule offers beautiful finished aluminum and nothing else.

When an iPad is placed into the Zooka and music is streamed through it, the audio is far better than you would otherwise get if using the iPad alone. And because of the position of the iPad inside the Zooka the audio actually seems as if it is coming from the iPad. It is a good design. 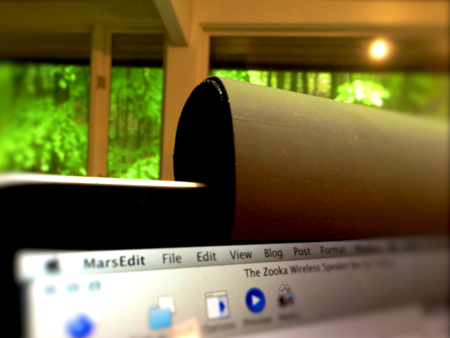 If, however, you are listening to music or watching a video on your laptop you can flip the Zooka over and set the channel that would otherwise hold the tablet over the laptop’s screen, then you’ll get enhanced audio from your laptop. Don’t worry about the screen getting damaged by the speaker — the entire Zooka is covering in a soft-touch material that looks nice, feels great and won’t scratch your gear. 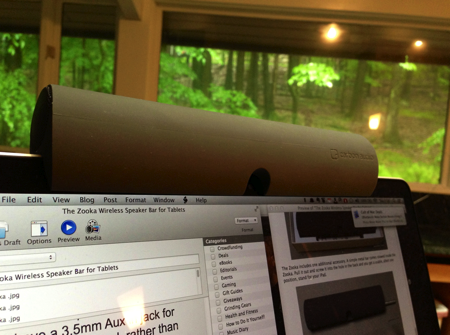 A cutout in the middle of the Zooka means you won’t even lose access to your computer’s video chat camera. This is a seriously clever and well-designed gadget!

Of course you can also use the Zooka the way you would any other Bluetooth speaker and keep it entirely separate from the audio source. If that is your primary use for a Bluetooth speaker though I think you might want to look elsewhere. There are other speakers whose audio quality you might prefer. (For example, I still think the JBL Flip offers great audio for the price.) But the ability to use the Zooka as a tablet stand or laptop companion raises this wireless speaker to an entirely different level than most of its competitors.

No matter how you end up using the Zooka you will, of course, need to turn it on and off and adjust the volume. The speaker bar has all the basic controls you might expect. There is a power button, a Bluetooth pairing button, volume up and down buttons, a microUSB charging port, and the aforementioned 3.5mm AuxIn port. I’m not in love with the position of the controls. When sitting on top of your laptop they are on top and easily accessible. (It is also worth noting that the Carbon Audio name and logo are upright in this orientation.)

When using the Zooka with a tablet though the controls are not only on the bottom, but they are on the bottom and inaccessible without lifting the Zooka, and the tablet if you are using one, up into the air. In addition, in this orientation the Carbon Audio name and logo are upside down. No surprise there. It makes no sense to me, and I would much prefer the controls on the front or back of the Zooka. It is far from a deal breaker, but in a speaker that is so thoughtfully designed is does leave me scratching my head a bit. 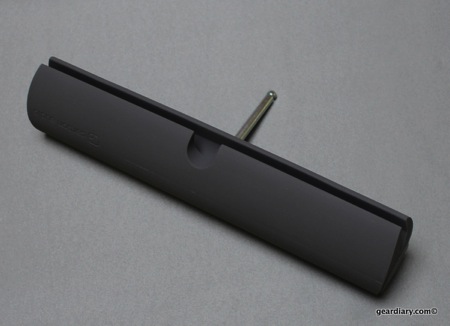 When we were approached about covering the Zooka I was somewhat skeptical. We have reviewed numerous Bluetooth speakers, and I didn’t expect to be impressed by yet another sub-$100 offering. Thanks to its design, its speak repositioning and the overall experience of using it however I am impressed. If you are looking for a better audio experience when using your laptop or tablet and want something that won’t sit completely separate from either of them the Zooka may be a good bet. If, on the other hand, you are simply looking for a Bluetooth speaker you might want to compare features and prices. There are, after all, numerous Bluetooth speakers from which you can choose. You can learn more and order yours here.

What I Like: Good sound; Functions as an iPad stand; Side atop your Laptop’s screen without obscuring the video camera; Under $100, Awesomely cool name

What Needs Improvement: No 3.5mm cable in the box; Controls on the bottom when using the Zooka with a tablet