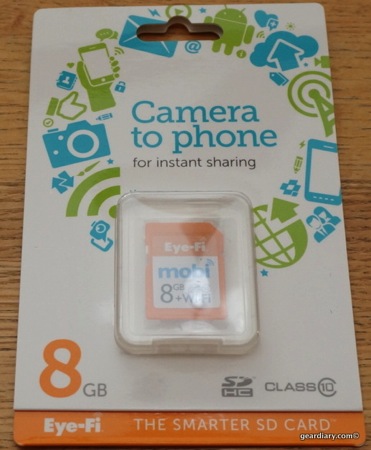 One of the big selling points of the Sony NEX-6 I recently purchased was the built-in WiFi that allows for wireless on-the-go transfers from the camera to an iOS device. (Yeah, I like the small size, awesome picture quality and interchangeable lenses too but this WiFi thing really caught my eye!) Fortunately you don’t need to go out and buy a new camera in order to get wireless on-the-go transfers of images from your camera to you mobile device. Eye-Fi’s new mobi SD card lets anyone add the functionality to just about any camera. And with an 8GB card running just $49.99, there no reason you shouldn’t go out and buy one.

I met with the company the other day to learn more and walked away with a review sample. Although I don’t need one in my WiFi enabled Sony NEX-6, I put the card through its paces, and I liked what I saw. Let’s take a closer look. 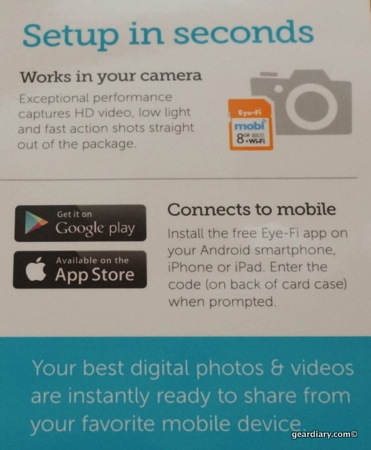 The package makes it clear that the mobi is designed for use with both Android and iOS. There doesn’t seem to be an app for Blackberry or Windows Phone, but I hope one will be forthcoming since the success of both platforms is, to a large degree, going to be tied to the availability of apps. Is that fair? Maybe not, but in an App-powered world people are increasingly choosing their device based on what it can do. That means … apps. 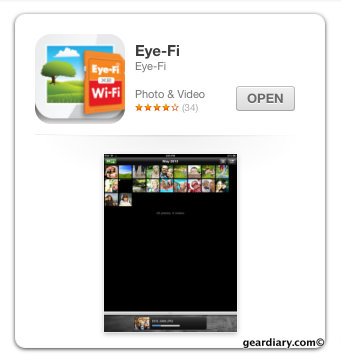 The Free iOS App. There’s One for Android and Kindle Fire

The iOS app is a free download from the iTunes App Store. It is the same Eye-Fi app I previously used with my Eye-Fi Explorer Card. The difference, as we will shortly see, is the simplicity and stability of the mobi card when used with the app. 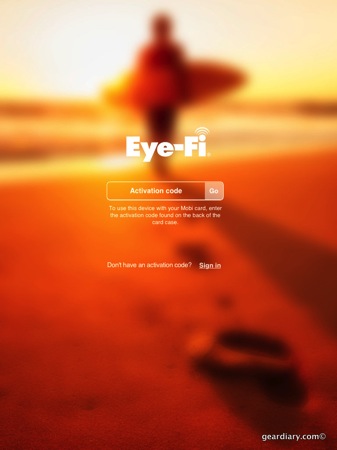 I loaded the app on my iPad and launched it. The app immediately knew I was looking to set up a mobi card, and it asked me for the activation code. That code is on the back of the plastic case holding the card in the retail package; it is not something you will want to lose. My suggestion as soon as you open the package snap a picture of the code and save it to your Evernote account. Sure there are ways to activate the card without the code, but the point of the mobi card is simplicity, and this is one area where that shows. 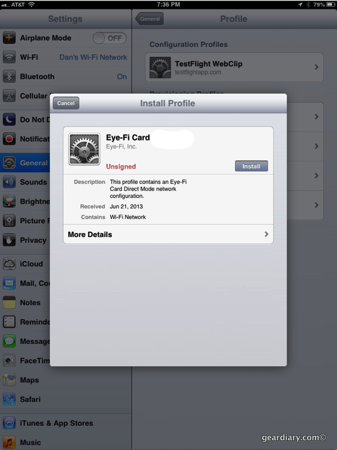 I input the code and the app sent me to my device settings. I was invited to add a wireless profile to my iPad settings. This is what allows the iPad to connect directly to the card’s WiFi antenna. I accepted the invitation to install the profile and was immediately bounced back to the Eye-Fi apps. 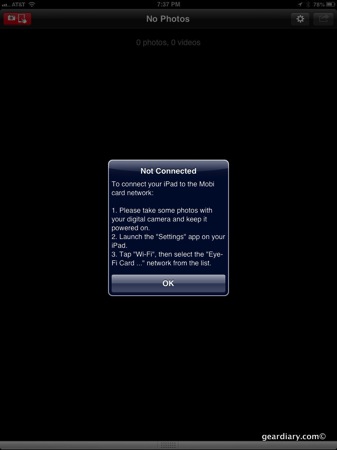 Now the Eye-Fi app informed me that the mobi card was not connected to the iPad. To make that connection, I jumped from the app to the iPad’s setting page and dug down the menus to get to the WiFi settings page. Note: in iOS 7 this process of switching from one wireless network to the mobi card will be as simple as swiping up from the bottom of the screen to launch the Control Center. I’m using the first Beta on a tester device, and the Control Center is a terrific convenience. 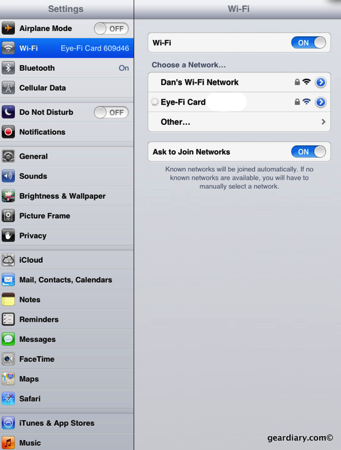 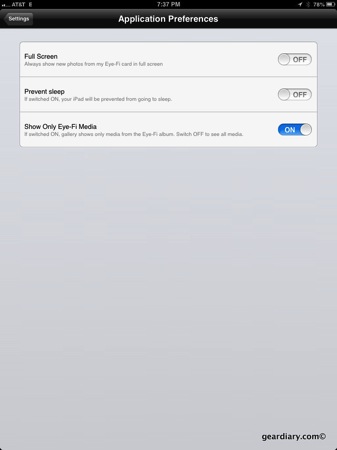 The app was now authorized and the mobi card was connected to my iPad. I went into the Eye-Fi app’s settings and adjusted things to work the way I wanted. I set it to show new pictures in Full Screen mode, kept the iPad from going to sleep when transferring pictures from the camera to the iPad and adjusted the settings so the Eye-Fi app would only show media that has been transferred from the camera to the app. All of these settings are largely insignificant but they do allow you to make a few welcome adjustments. 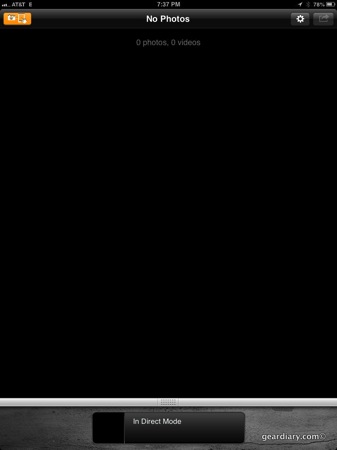 I had not taken any pictures with the mobi card in my camera, so the app showed me … nothing. 🙂 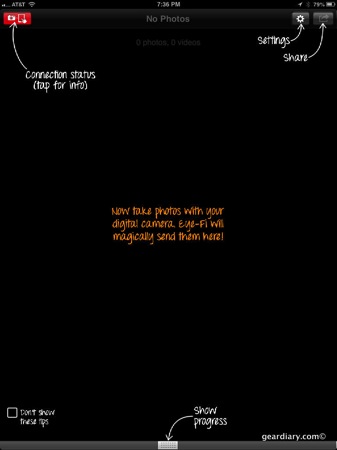 It did, however, offer me a few tips on using the app. This is, yet again, an example of how the Eye-Fi’s mobi card is designed to work simply and quickly. 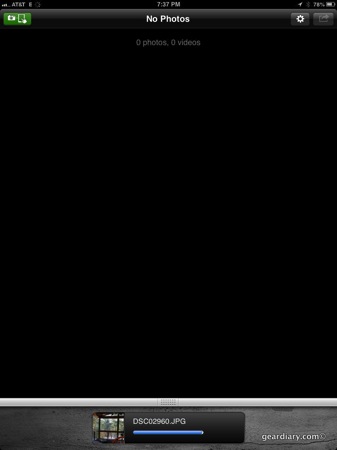 After I snapped my first picture it suddenly began to show some activity. As the day went on I took numerous pictures and, each time, was able to send them to my iPad within seconds. Here are just a few…

I was impressed with the transfer speeds which are greatly improved over previous Eye-Fi cards. 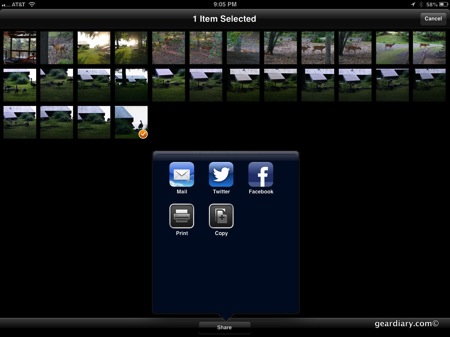 You can even send pictures to various sharing services right from the Eye-Fi app.

Compatible with thousands of cameras

Exceptional WiFi range: Stable, high-speed connections whether your smartphone stays in your pocket, or your computer’s in the back office. (90ft outdoors/45ft indoors)

Instantly uploads to iOS or Android devices: Access photos & videos real-time from your smartphone or tablet like iPhone, iPad or Android.

Allow you to delete images you have transferred

Edit: It is worth noting that while the battery hit when transferring images was not significant the hit my camera took when transferring a 1+GB video was huge and is not something I would do unless I had extra batteries available to me.

My experience with Eye-Fi’s previous cards was rather mixed when I tried to use them with my iOS devices. At least in my experience, they would, far too often, fail to connect or quit mid-share. That is not the case with the mobi card which is, in my experience, everything the company said it would be. It is simple to set up, simple to use and it works flawlessly. As the product page notes,

Your best shots. Now mobile. mobi instantly delivers your best photos & videos from your camera to your smartphone or tablet. No wireless network required. mobi creates its own WiFi so it works anywhere you are.

At under $50 it is a great way to get your pictures from your camera to your mobile device, no matter where you are. Learn more and order yours here. Get an 8GB card from our Amazon Affiliate Store for $49.94 or a 16GB card for $75.

What I Like: Simple to set up and use; Adds wireless capabilities to most cameras for under $50; Quick transfers to iOS and Android devices

What Needs Improvement: No app for Windows Phone or Blackberry; No ability to delete content from the card on the fly; Battery hit when transferring video is significant