Evernote is five years old and its growth sees no time of slowing any time soon. The company’s iOS app was one of my most important productivity apps early on. And, since then, Evernote’s various apps have become increasingly powerful. (I love capturing handwritten pages with the new Page Camera!) The other day they sent out emails to all Evernote subscribers thanking them for their support and indicating what number subscriber each was. Here’s the text of Mike’s email and his number. 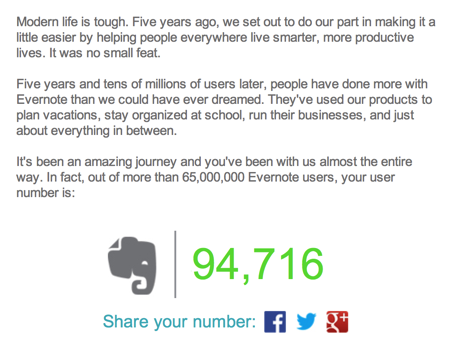 Yes, there are 65 million Evernote users and Mike is below 100,000. Not bad! Judie, however has been using Evernote a bit longer than Mike. Her number?

I knew I was an early Evernote adopter but I didn’t realize I was THAT early to the game. Then again Evernote was and remains one of my key productivity apps. Did you get an Evernote email? What number subscriber were you?