Popcap and EA Games have teamed up to bring you the greatly anticipated follow-up to the original Plants vs. Zombies.  The premise of the Plants vs. Zombies series is that you’re a homeowner who is trying to defend his house against a horde of the undead.  Your weapon? Plants.  Good Luck! Plants vs. Zombies 2 is out now for free on the App Store.

After a lengthy beta testing period and a soft launch in New Zealand, Plants vs. Zombies 2 is finally available to all of us Americans.  This time, instead of only defending your own home from the incoming zombie horde, you’re taken back in time to defend ancient Egypt, the Wild West, and the Pirate Seas.  There are also new plants available to fight in your side including Bonk Choy, Bloomerang, and Lighting Reed.  Also, with new locations comes new zombies.  You’ll see a number of new walkers with new abilities throughout the game. 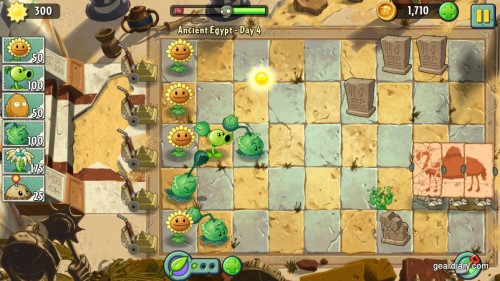 Those sneaky zombies think I’ll confuse them for a camel.

There are also new game mechanics like Plant Food, which will supercharge one of your plants for a short period of time.  You can also use your fingers to pinch, flick, and zap the zombies trying to attack your homestead.  There are also upgrades that can be purchased to add another seed slot to your arsenal, or add another 25 sun to the 50 that you start with. 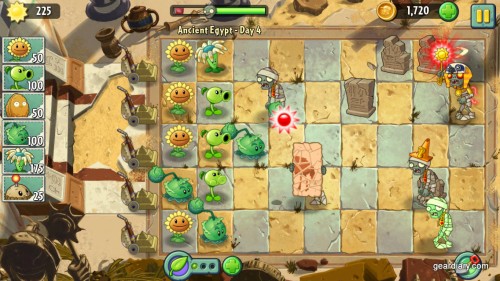 Speaking of in app purchases, I read a lot of reports during the New Zealand soft launch period that admonished EA for bringing big in app purchases into the game and forcing players to use real money, rather than in-game, earn-able currency to buy certain plants.  While this is definitely the case, as you can see in some of the screenshots below, I feel that it’s possible to play through the game, enjoying yourself, without having to spend a single cent.  Another point to keep in mind is that without in app purchases, the price of Plants vs. Zombies 2 would likely be at least $5 instead of the much nicer number, zero dollars.  Those who want to spend money on the game will do so, and those who don’t, won’t have to open their wallets to enjoy the game.  It’s as simple as that. 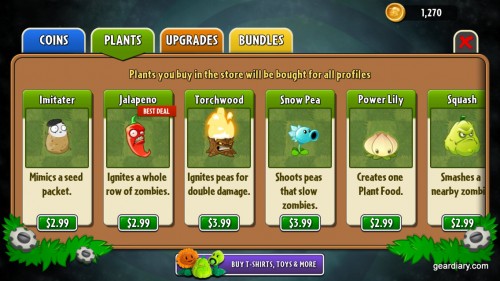 Stay tuned to Gear Diary for Michael Anderson’s full review.  But in the meantime, feel free to use the comments section of this article to let us know what you think of the game!

Check out Plants vs. Zombies 2 on the App Store, out today, for free.