If you’ve got a Samsung Galaxy S4, and you want corner protection without covering up your phone more than absolutely necessary, then the $99.99 DRACO design HYDRA for S4 bumper case may be exactly what you’ve been looking for. It’s sleek, made of aluminum, and it manages to make the S4 look even hotter! 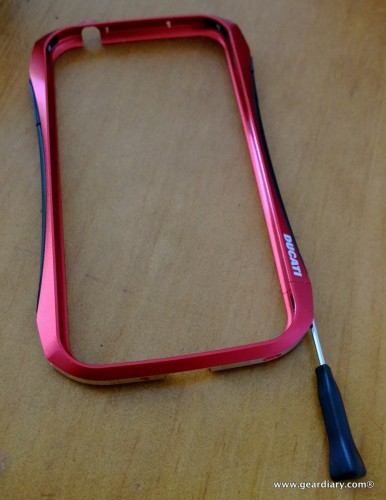 As you may have guessed by looking at these pictures, the DRACOdesign HYDRA is an officially licensed Ducati product. Available in Meteor Black, Luxury Silver, and the Flare Red I was sent, the HYDRA is composed of aircraft grade aluminum that has been precision-machined in a 5 axis CNC process. The result, at least in the case of the Flare Red model, is a sexy red case with silver and black accents. The black accents are composed of plastic, and they remind me of black rubber bumpers on a sports car … or in this case, black rubber tires on a motorcycle. 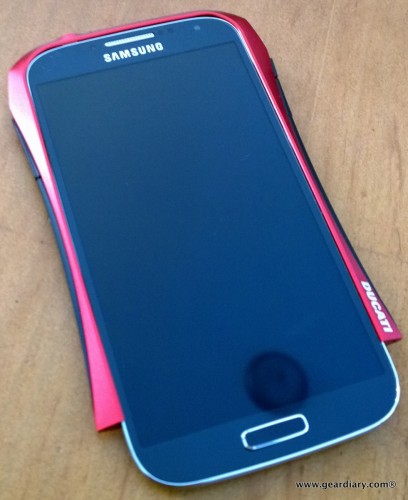 The case is composed of two pieces that are locked together with two special screws; the matching screwdriver and two extra screws are included.  There are generously sized cutouts for all of the ports, speakers and microphones, and black plastic button covers for the power and volume buttons. There are also two little holes on the bottom right for attaching a wrist lanyard (not included); the holes are small enough that they don’t make it obvious if you haven’t attached a lanyard, but large enough that you won’t be cursing them as you try to insert the little strings attached to your lanyard of choice. 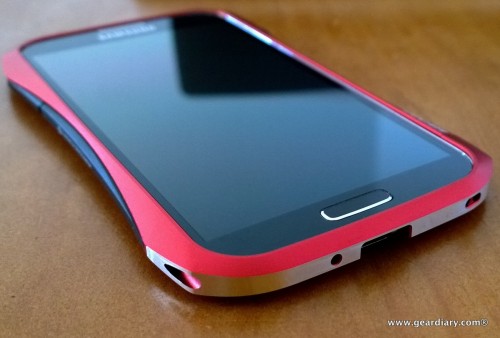 Inside the bumper, there are rubber bits inserted on the corners to protect the S4 in a drop; these should also help keep the plastic case from getting too scratched up, but if that is a concern you should install a full protective skin and then put the S4 inside this case. I’m actually surprised that one wasn’t included.

Because this is a bumper design rather than a full case design, S4’s back and screen are left exposed, but a bit of protection is included because of the slight lip on both the front and back. Even so, as I mentioned above and in the DRACOdesign ONE review, it would certainly be prudent to install a clear skin on your device. With a clear skin installed, I think using this bumper case would be essentially worry-free. 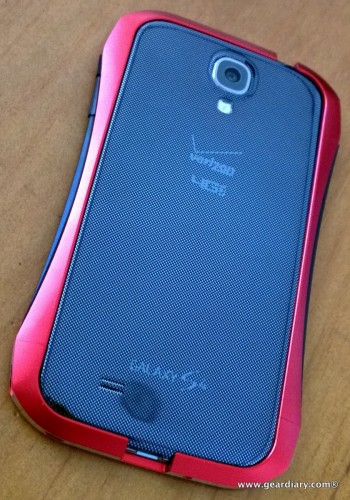 The HYDRA manages to make the S4 feel more rigid without weighing it down or making it too bulky; this is definitely the case for someone who wants to keep their phone sleek, and who abhors a big rubberized full protective case. You get an included Ducati sticker that can be affixed to the S4’s back, but I thought it was a bit much — especially if you don’t actually own one of their motorcycles. If you do own a Ducati, then stick that sucker on, and wear it proudly!

The DRACOdesign HYDRA Aluminum Bumper for Samsung Galaxy S4 is available directly from the manufacturer in Meteor Black, Luxury Silver, and Flare Red.

What I Like: Not bulky, and it doesn’t look cheap; protects all four corners on the device; adds ergonomic curves and solidity to the otherwise plastic-y S4; has wrist lanyard holes for those who like to use one

What Needs Improvement: Ideally the kit would include at least a clear skin for the Samsung Galaxy S4’s back