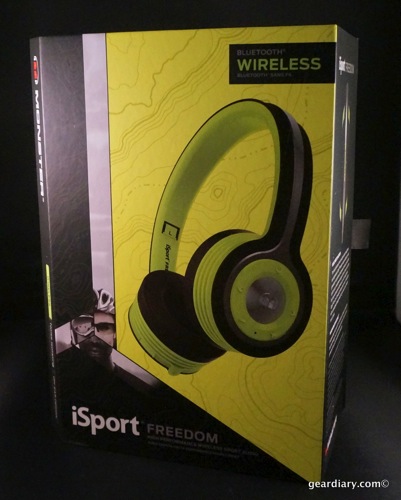 If you are looking to listen to music while working out there are a number of decent options. If you want wireless sport headphones the choice quickly becomes limited. And if you want wireless, on-ear headphones options are few. Fortunately, Monster’s iSport Freedom on-ear Bluetooth headphones are good enough that you won’t want to go hunting for other options. 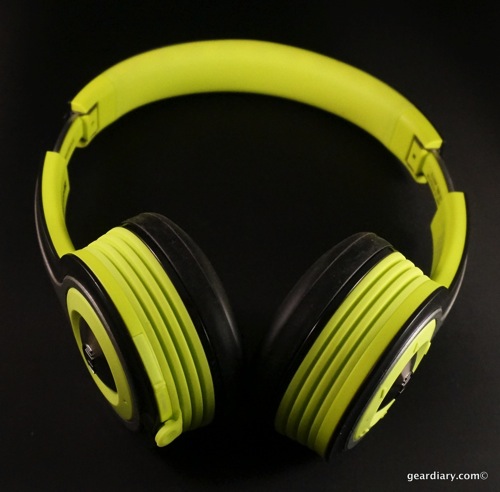 There is no question the Monster iSport Freedom wireless headphones are targeted to the athlete and athlete wannabe. As they put it on the product page:

iSport Freedom, a wireless music and phone experience in a compact on-ear headphone design that will revolutionize your life. Nothing will come between you and your music, no matter your workout or routine. Let the soundtrack begin.

And while the iSport Freedom do fit nicely into most workouts or routines, they are headphones one could easily purchase to use for workouts and on a regular basis. Before digging into the iSport Freedom’s any further, lets step back a bit and look at the bigger picture and where they fit in.

As portable music has become increasingly ubiquitous — remember, the iPod was only introduced a dozen years ago and, initially, it was Mac-only(!!) — the desire to be able to bring ones music along while working out has grown. YurBuds, a company whose products we have reviewed previously, initially offered special covers that fit over Apple’s earbuds. They quickly realized they would find far move acceptance, and make more money if, instead of offering these odd earbud shields they produced their own headphones that incorporated their special design. They did, and the brand took off. They remain the only sports earbuds Elana will use. The Yurbud line has grown significantly, but they still only offer wired solutions. Plantronics and Jabra offer wireless sport headphone solutions, but both are in-ear rather than on-ear headphones. 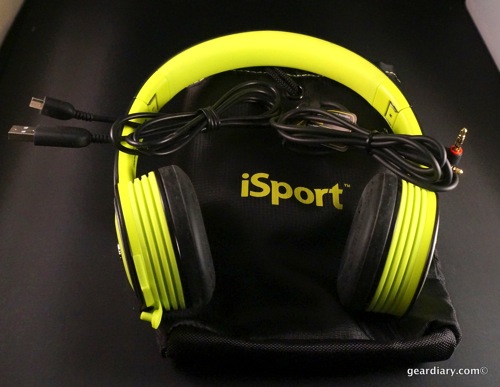 Monster has a growing line of sports headphones that currently include three wired in-ear solutions- the $69.95 iSport Strive, the $99.95 iSport Intensity, and the $149.95 iSport Victory. At an MSRP of $269.95 the iSport Freedom are the most expensive sports headphones in their line up and have the distinction of being the only on-ear sports headphones as well. Honestly they strike me as “Monster N-Tune wired headphones go wireless and athletic”.

In the box you will find: 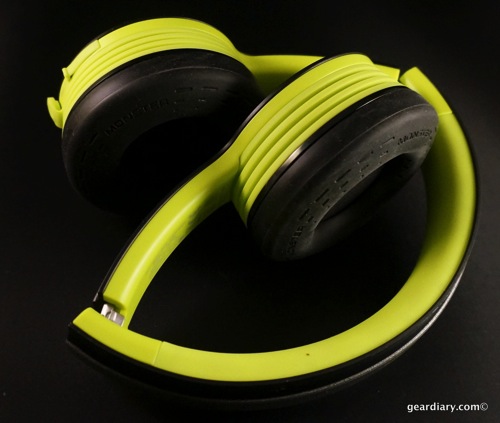 The Monster iSport Freedom headphones are tough. The headband can be bent, beaten and otherwise abused and hold up well. (Considering the price of the headphones we don’t recommend testing this out on your pair but we do expect that, if you did, you would be impressed. We have done the “flatten the headband in unfair ways” test and were impressed with their resilience. The included carry pouch lets you toss the folded headphones, 3.5mm to 3.5mm cable and charging cable inside so you can bring them along. 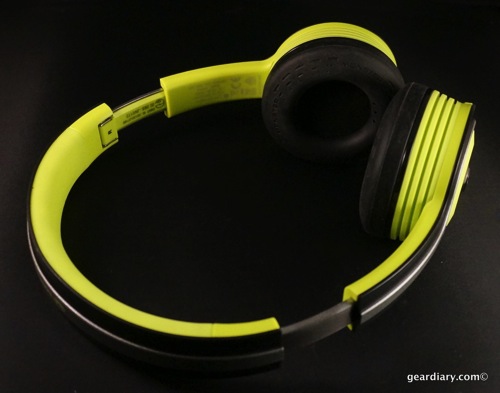 As we mentioned, the iSport Freedoms are built for athletes and, as a result, are quite rugged. They offer “superior design and construction that is optimized for comfort and reliability” and , as a rest, are water-resistant, sweat proof, and washable. (Washable as in “wipe them down” rather than “toss in the dishwasher”. I know that should be obvious, but I don’t want to assume anything.) 🙂 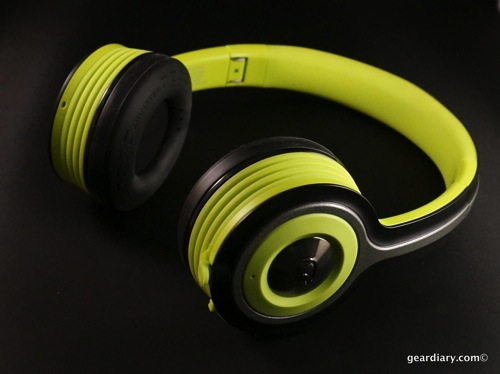 The ear cups have a nice, soft feel that conforms nicely to your ears and blocks out a good bit of ambient sound. The accordian style “joint” between the headphones and the ear cups allows the padded area to sit comfortably on your ears and move into the position that best “seals” them. Obviously everyone’s heads are different sizes and ears are different shapes. The padding of the ear cups and this accordion design allows the iSport Freedoms to accommodate the widest range as possible.

As you can see, Monster rates the sound isolation as “Moderate”. That’s probably a good thing since you don’t want to be working out and be totally unaware of your surroundings.

I pulled out the Monster DNA Tuxedo on-ear headphones we reviewed earlier this year and listened to the same series of songs with each. From the perspective of “fit and feel” the experience was similar although I quickly came to realize that the Monster DNA headphones put far less pressure on my ears and, as a result, were more comfortable to wear over an extended period of time. I do want to be careful in that assessment because it really isn’t a judgment on the iSport Freedom headphones. They are designed to be worn during active periods. In order to stay in place while you are moving, jumping, running and otherwise being physical they NEED to place a decent amount of pressure on your ears and head. It isn’t uncomfortable but it does cause some ear fatigue more quickly than other on-ear offerings. 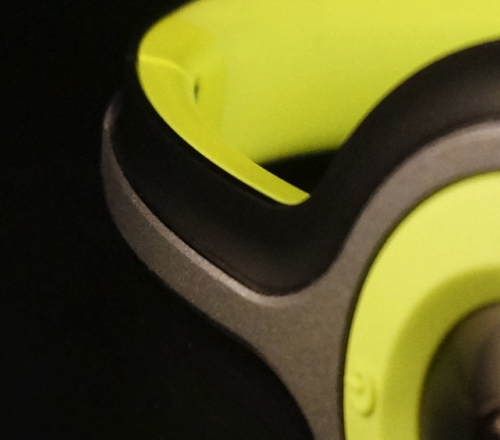 These headphones are specifically built for use while exercising. Understanding that some may wear them at dusk or even at night Monster opted to include some reflective material in the band and along the ear cups. This will let cars see you if you are out running at night. (Still, running at night if there is no moon and there aren’t good elimination solutions along the road isn’t the wisest of things to do.)

In order to test out the reflective aspect of the headphones, I walked down the street on a night when there was no moon. I knew Elana was coming to pick me up and, at some point, we would meet as I walked and she drove. I wanted to see if the reflective material would catch her eye before she actually saw ME. That is not what happened and, as she put it, “The inclusion of reflective material is nice, but people shouldn’t be relying on it for safety”. 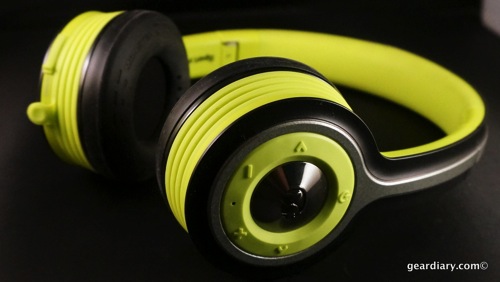 Bluetooth headphones are always a mixed bag when it comes to the layout and function of the buttons and controls. On the one hand you need enough to be able to control your music, skip or repeat tracks and answer calls. (Yes, these allow you to make and receive phone calls.) The controls need to be numerous enough to do the job but they also need to be simple and intuitive enough that you won’t need to take the headphones off to use them (or get a PhD).

Monster does a pretty good job of striking the right balance here. Controls are plentiful, arranged in a specific manner that is relatively easy to learn and offer enough tactile feel thanks to the position and the raised icons for each function that you should be able to easily start using them without having to first take them off. 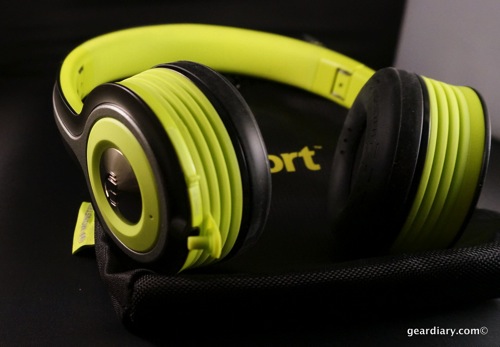 I appreciate the fact that the microUSB port is sealed but easily accessible. I LOVE the fact that there is a 3.5mm headphone port so you can use the iSport Freedom headphones as a wired solution if the battery runs down. Better still, the included cable includes Monster’s ControlTalk remote microphone so you can still make and take calls when in wired mode. For obvious reasons the seal on the 3.5mm port is quite tight. That’s a good thing, but it also means you won’t be able to close it up without taking the headphones off and looking at them. 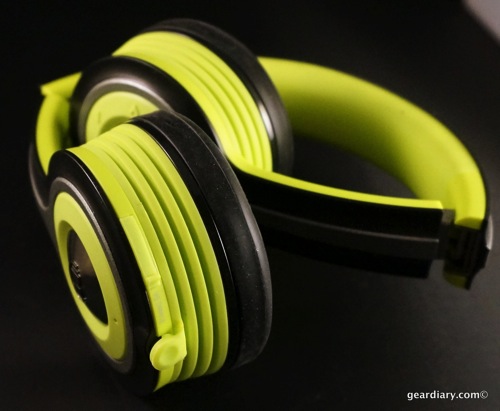 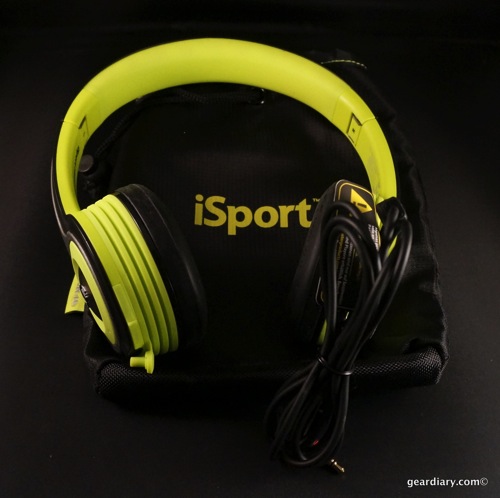 All of that noted, if you are looking for a pair of on-ear wireless headphones that can keep up with your pace when you are working out and you don’t want to buy a number of “activity-specific” headphones the Monster iSport Freedom headphones can easily step in as your sport and everyday headphone.

Just $249.95 through our Amazon Affiliate Store.
Get them!

What I Like: Great build quality; Work as wired or wireless headphones; Built for active use; Easy controls; Wired cable include Monster ControlTalk remote microphone

What Needs Improvement: Ear cups but more pressure on your head than many on-ear headphones and cause fatigue; Good sound but other Monster headphones edge them out