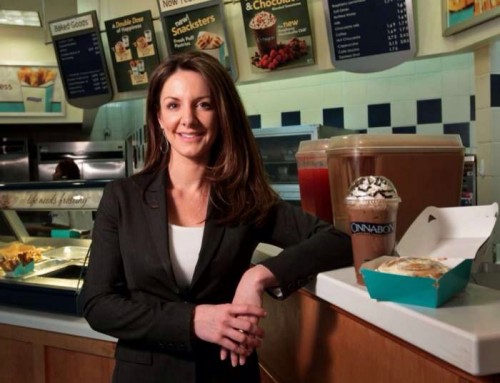 Quick, what was your first job? Something entry-level and basic? Would you want to be defined by it, no matter how embarrassing or how much success you’ve enjoyed since then? CNN sure thinks so, based on their ridiculous profile of Kat Cole, the president of Cinnabon. Or, as CNN sought to define her, former “Hooters” waitress.

You can check out the full profile of Cole on CNN.com, but here’s the highlights: Cole started as a Hooters waitress, worked her way up the corporate ladder, obtained an MBA and eventually was recruited to run Cinnabon. However, you won’t learn much of that in the first minute and a half of a 2:30 video-instead, over half the video is devoted to the “Hooters girl turned legit business lady” narration. The only quote from Cole on the entire thing regarding her Hooters start is that everyone has a first job, and hers just seems to attract more attention. Since CNN clearly couldn’t get more than that out of someone trying to have a professional interview about Cinnabon, they fluffed the entire video with narration about Kat Cole being a Hooters girl. Basically, they took someone who has an amazing story of corporate success and tried to focus entirely on a salacious angle that has nothing to do with their subject’s ability to run a multi-million dollar fast food business.

I can’t help but wonder, would CNN do the same thing if the president of Cinnabon started as a male model, lifeguard, or any other profession that objectifies the male body in the same way “Hooters” does for women? My gut is that they wouldn’t, except as a minor human interest mention. Instead, the profile would probably be about someone who worked at 17 to support their family, dropped out of college to pursue opportunities, and then returned to school, obtained an MBA and became a powerful executive at a young age. It’s a shame they chose to focus on the superficially sensational parts of Kat Cole’s résumé, rather than inspirational!

And of course, the other question: Does Twitter think she’s not a qualified enough executive to sit on their board? At least she would come with snacks!