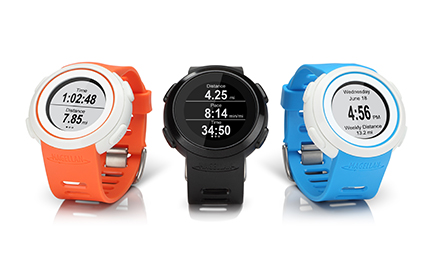 Magellan recently launched the Echo Bluetooth fitness watch, which pairs to your smartphone and provides interactive display and controls. I am finishing my review, but (spoiler alert) I totally love it and use it every day. At CES they are launching new capabilities for Echo, and also introducing new colors that will make it more appealing as an everyday watch.

Compared to other devices, one of the strengths and potential weaknesses is that the functionality of Echo is dictated by the app you connect. For example, I started with MapMyRun and was very much underwhelmed … but once I switched to Wahoo Fitness I was hooked! I could change button functionality, control everything, track heart rate, and export it all to pretty much any fitness site I wanted (I use Garmin Connect).

Now they are looking to add golf, skiing, hiking, and other outdoor activities to its capabilities

Here is what they are saying:
“After Echo initially launched, we quickly saw its potential for sports beyond running,” commented Clark Weber, senior director of fitness and wearable products at Magellan. “As an open platform, Echo is designed to work with any app that can leverage a ruggedized, sporty smartwatch. We are proud to announce that leading apps such as Golf Pad, FreeCaddie and AllTrails will be supporting Echo in the near future. Retailers, also, have recognized the advantages of a product focused on sport, rather than general-use smart watches, that don’t meet the needs of athletes, ” added Weber.

That app integration I mentioned was a critical part of the new functionality – the single out connectivity with the Golf Pad app, but highlight the importance of app functionality:

Echo is brought to life by its apps. Whether the user is a runner, skier, golfer, or virtually any type of outdoor athlete, there is an app that keeps them informed and in control. Pairing with their favorite sports app, users receive information that streams from their smartphone directly to their Echo Smart Sports Watch in real-time. They easily can keep track of their running pace, the distance to the green, or maximum speed on their last ski run.

Also, unlike other fitness trackers, because it doesn’t house a GPS or other sensors, all it needs is a low-power Smart Bluetooth connection to your phone – this means it is supposed to last 8-10 months on a single CR2032 coin-cell battery. I am testing that going out running in cold weather every day, and will follow-up when the battery dies! The lack of sensors makes it a sleeker device that can be used as an everyday watch.

The black Magellan Echo Smart Sports Watch is already available, and has an MSRP of $149 for the watch or $199 with a Bluetooth Smart Heart Rate Monitor (Amazon link).

I noted on Amazon that the Blue and Orange models now also show as available. Magellan says that the Gray and Dark Blue versions will be available in early Spring 2014.

You can get more details and ordering info from Magellan’s Echo site.