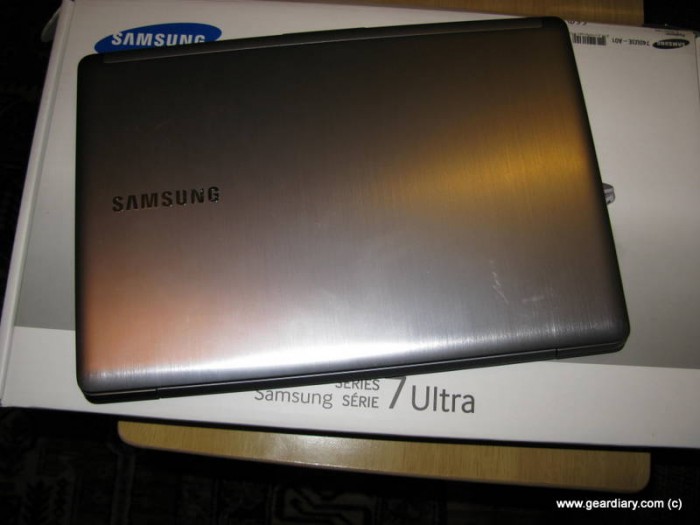 Samsung is an absolute powerhouse in the technology world. But aside from a rather disastrous Windows Mobile phone a few years ago, I’ve never experienced firsthand what makes Samsung stand out from the crowd. After spending a few weeks working with the Samsung Series 7 Ultrabook though, I’m starting to see why they succeed — this Ultrabook is sleek, stylish and powerful!

Here are the specs for the Series 7 Ultrabook:

Basically, the Series 7 has everything you’d expect in a high-end Ultrabook, including a touchscreen. On paper, it looks great, but the important question is whether those theoretical specs translate to an excellent real-world experience. 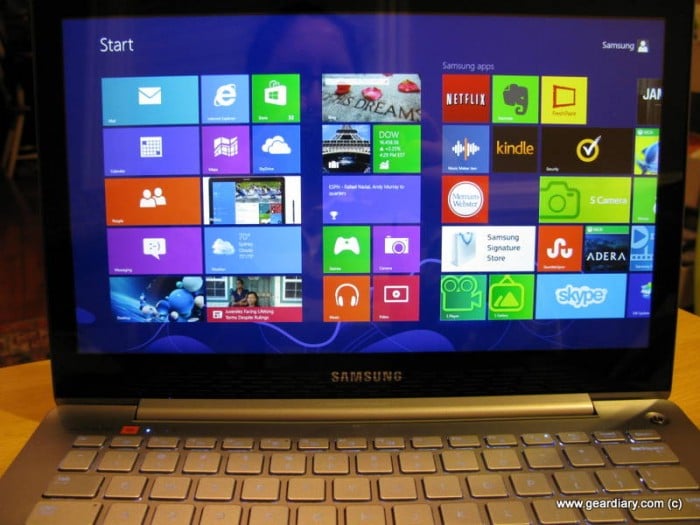 I won’t hold you in suspense — they do.

Everything about the Series 7 oozes quality from the moment you take it out of the box. This Ultrabook is made of aluminum, and while it’s a bit heavier than it seems like it should be, it feels quite solid. Nothing creaks and the fit and finish are all perfect. The brushed metal is resistant to fingerprints, so it stays looking quite sharp.

The touchscreen is very responsive; there have been several occasions where I’ve opted to touch the screen over using the trackpad simply because the touchscreen is such a joy to use. It’s even quite accurate in desktop apps that are not very touch-optimized, like Chrome. Battery life has also been quite impressive; I haven’t timed it, but I’ve had the computer for review for around three weeks, and I think in that time I’ve charged it twice. Granted, it’s not getting regular long-term use, but based on my experience I’d say Samsung’s 7.8 hours estimate is fairly accurate. The Ultrabook certainly holds a charge well in standby; for web browsing and light use, I barely seem to make a dent in the battery meter, despite leaving battery vampires like the keyboard backlight active. 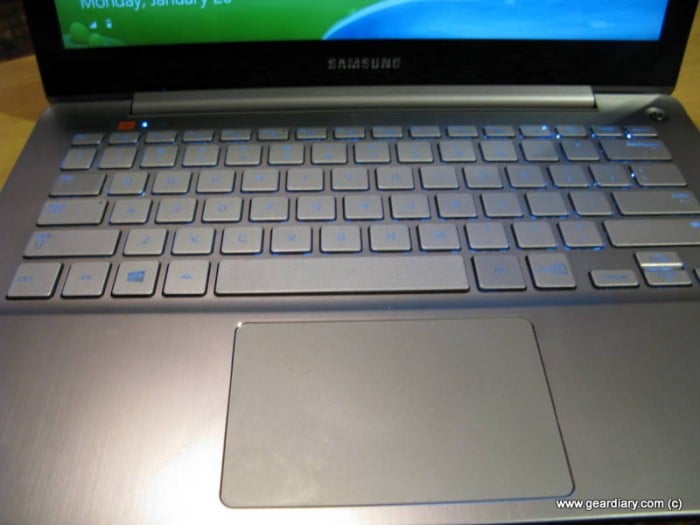 Speaking of the keyboard, it’s absolutely fantastic. It’s a chicklet style keyboard, and the keys have good travel, they aren’t too “clicky”, and they are overall quite comfortable. Likewise, the touchpad is also quite generously sized and comfortable. I do appreciate that there’s a plentiful amount of space on either side of the trackpad to rest your hands. Windows 8 has many great gestures, but if you have too cramped of a touchpad/keyboard area it can lead to lots of accidental gestures, and suddenly you’ve swapped apps because of an errant thumb-brush. The spacing on the Series 7 means this isn’t an issue, and while it’s a minor point, trust me — you’d notice if it kept happening to you! 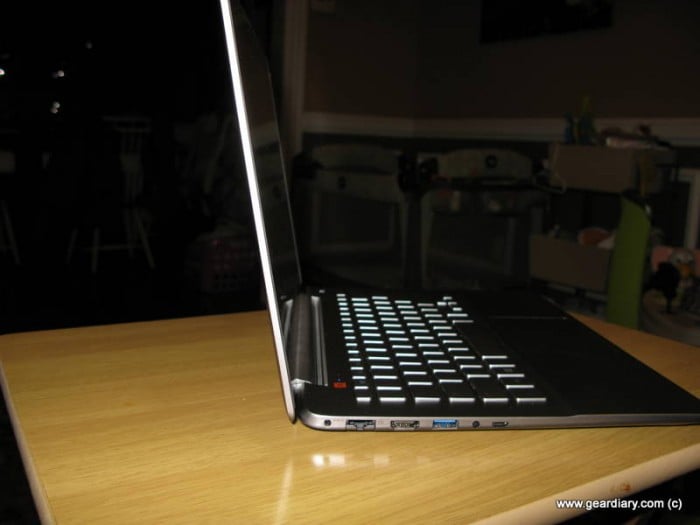 Samsung includes a number of apps on top of the usual Windows 8 defaults, including S Camera and S Player. S Camera lets you use the webcam to take still images as well as video, and S Gallery lets you create slideshows, organize your photos based on when you took them, etc. It’s a nice value-added item, especially since S Player lets you pull photos in from Flickr and Facebook as well as photos on the computer.

S Service, a way to access remote tech support from Samsung, is also offered. The app even lets you know right at the login screen how long the wait time is, as well as whether there are other customers in front of you. 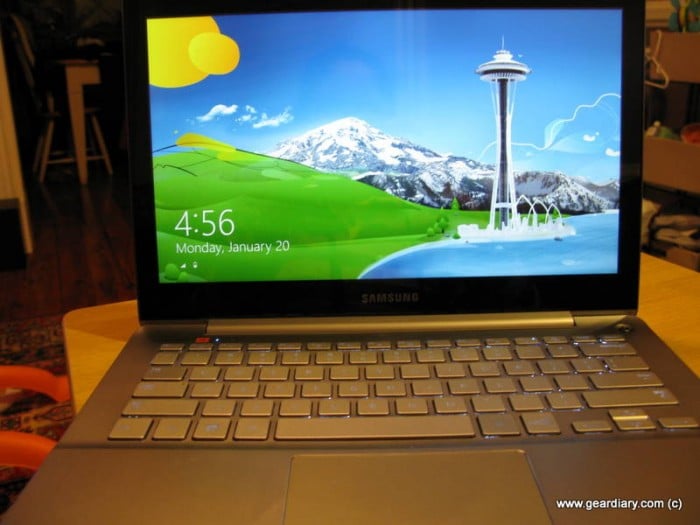 The true standout of the Series 7 is the screen. It’s a bright, clear, high-definition screen, and it looks phenomenal when rendering web pages or playing video. Colors really seem to pop, which makes the Windows 8 Start screen a visual treat when you first start up the system. I found that editing photos and posts for our CES coverage on the Series 7 was fantastic simply because I could really tell which photos looked good and what needed to be retouched and retooled. And as I said above, the touchscreen is also very responsive, and it even works with a capacitive stylus if you want to keep your screen free of fingerprints.

Windows 8 has taken a lot of flack from users and reviewers who aren’t fans of the hybrid computer/touch paradigm it brings, but the Series 7 handles Windows 8 the way I think Microsoft imagined it should be. It’s a perfectly capable laptop in desktop mode. If you really hate the new look of Windows 8, then you could stay in desktop mode, ignore or rarely use the touch features, and still be pleased by how speedy and responsive this Ultrabook is.

When you dip into the Windows 8 user interface, however, whether it’s swiping to the right to pull up settings or flicking through the Start Screen and app list, you’ll really appreciate having a touchscreen there to get you to your destination that much faster. There’s no lag between your touch and the system responding, and it feels oddly natural to reach up and tap needed items when in the more finger-friendly Metro/Start screen side.

Microsoft actually predicted something correctly when they pushed for touch on Windows 8, and that’s how tablets have changed how we view our computers. It feels instinctively right to touch something and get a response — after all, that’s how real life works, where we touch things directly and not through an intermediary like a mouse. It’s why young children can work tablets practically out of the womb. They learn that touching something causes a reaction, and that’s what happens when you touch a touchscreen. That instinct is hardwired into our brains, and tablets have taught us to interact with technology that way as well.

Windows may still be catching up to the finger-friendly world, but having even a toe in it makes a huge difference. That’s why it is so key that a computer that has a touchscreen nails it, and the Series 7 does that quite well. A part of wondered if this would be better if there were a hinge for the screen to flip around tablet-style, but that would add thickness and complexity that isn’t necessary. This is a laptop that happens to have a touchscreen, not a full tablet, and if you look at it from that category it does a great job.

It’s hard to put my finger specifically on what makes the Series 7 a great device; it’s partly the build quality, partly the way it plays well with Windows 8, and it’s partly aesthetics — it’s just a good looking machine that begs to be touched. The sum of all those parts makes the Samsung Series 7 Ultrabook feel like a device without compromise. There are no gimmicky features, the various input and output ports are all there, the screen, keyboard, and touchpad are all a joy to use … and the end result is simply a fantastic device that’s definitely worthy of the “Ultrabook” label.

What I Like: Incredible build quality; Long battery life; Fast and responsive; Touchscreen adds to the experience; The screen is bright and clear

What Needs Improvement: On the heavy side; Samsung apps may be of limited value to some users; Touchscreen attracts fingerprints