Here’s something different — a Windows laptop that can handle just about every work scenario imaginable without looking like a dowdy, chunky, black box. The HP EliteBook Folio 1040 G1 takes several style points from Apple, and in the process becomes one of the thinnest, lightest, sleekest and best-looking notebook PCs I’ve handled. What makes it special?

Well, there’s no denying that the “sturdy CNC aluminum machined chassis” and ABS plastic body help make this EliteBook a stunner, but the beauty is not only skin-deep. The 1040 G1’s hardware “passes 12 MIL-STD 810G1 tests such as drop, shock, vibration, sand, humidity, altitude, and freeze/thaw.” The only thing that’s not mentioned is water resistance — so don’t take your laptop to the pool just yet! But wait — the specifications do list that the backlit keyboard is spill-resistant and that it has a drain, so maybe the fear of dumping your drink on your keyboard can finally be a thing of the past? 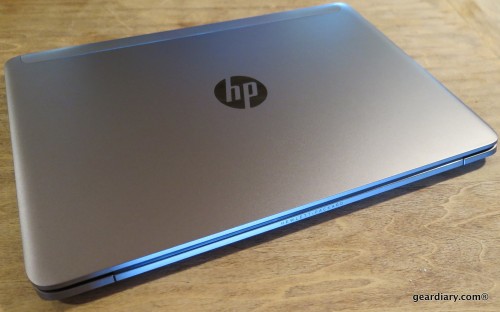 Measuring approximately 13.25″ wide x 9″ deep x 0.6″ thick and weighing 3 pounds 6.5 ounces, the 14″ EliteBook falls solidly in between the weight and size of my 2 pounds 6 ounces 11″ MacBook Air and my 4 pounds 9.5 ounces 15″ MacBook Pro retina. The HP EliteBook Folio 1040 G1 is slightly larger than what I am used to traveling with, but for just one pound more than the 11″ MacBook Air, I get three inches more screen. That’s a pretty fair trade-off because the reality of it all is that while I prefer to carry my lighter laptop around, I much prefer working on a laptop with a larger screen. More on the screen in a bit, of course. 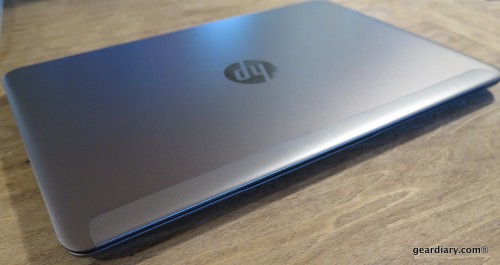 The EliteBook’s body is exceptionally light and rigid; the laptop feels solid, and I like that it is just about the same thickness (or thin-ness?) as my MacBook Air. On the left side, there is a cable lock point, a fan vent, a USB 3.0 port, a microSD slot (slick!!), and a credit card sized smart card slot. Do you work for the government or a large corporation that requires identity verification before you can use a computer? If so, the HP EliteBook Folio 1040 G1 has you covered.

Speaking of security, the EliteBook includes: 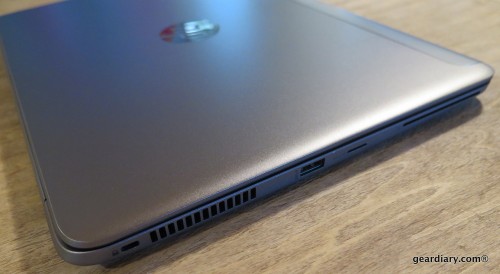 The right side of the laptop has a miniSIM slot, a headphone jack, a USB 3.0 port, an HDMI port, and a slot meant to accept the optional ethernet and VGA port.

The back edge of the laptop is clean, save for “Hewlett-Packard” tastefully written out along the spine. 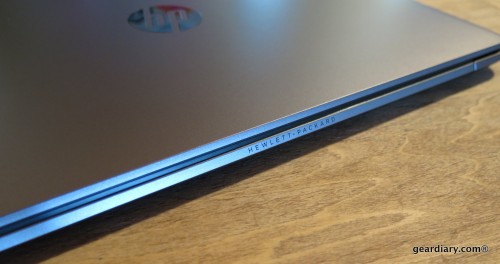 Opening the laptop reveals the new Synaptics’ ForcePad; there are no buttons — it is fully touch sensitive. After a moment or two getting used to tapping lightly on it instead of actually clicking on it, I liked using the ForcePad even better than the MacBook touchpad. Of course, the ForcePad supports gestures, and it’s very easy to figure out if you are used to using a mobile phone with a touchscreen. 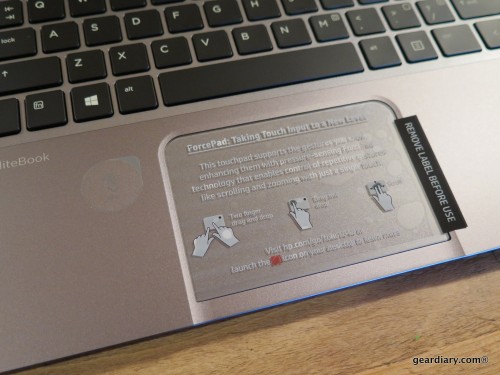 The EliteBook has NFC built in. NFC sounds like a cool feature to have in a laptop, but what would you actually use it for? Well … How would you use that in a real world situation? John Obeto and I brainstormed a bit: transfer files, mobile payments, mobile printing maybe? Playing music on the phone over the laptop? Transferring files back and forth from your phone is just about the most useful thing I could come up with, but I’m not sure that NFC would even be my preferred method. What about you? Why would you want NFC in your laptop? Other than just to be able to say that you have it, of course. 😉 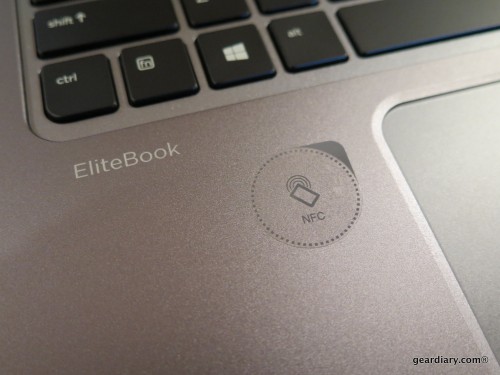 Ah, the biometrics, AKA the fingerprint reader. I have had these on other laptops. and it can be a bit of a love/hate relationship. On this laptop, it has been mostly a non-relationship, as I am still struggling to get it to work! I realized that the drivers hadn’t properly installed and got that righted, but now it’s a question of why it’s not showing up as an option. I’ll update the review later if I am able to get it going, but as of now – nothing. Have I mentioned yet that I had to install 8.1 and its drivers onto this laptop myself because it came with 7 Pro installed out of the box? No? I’ll get to that in just a bit, then. 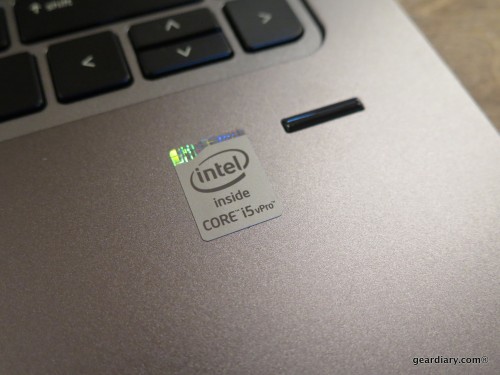 They keyboard is slightly recessed into a tray, which is also more than a little reminiscent of MacBooks, as are the black keys. At first glance, the main differences between the two would be the speakers at the top of the HP rather than on either side of the keyboard (as they are on the Macs) and the fingerprint reader on the bottom right. 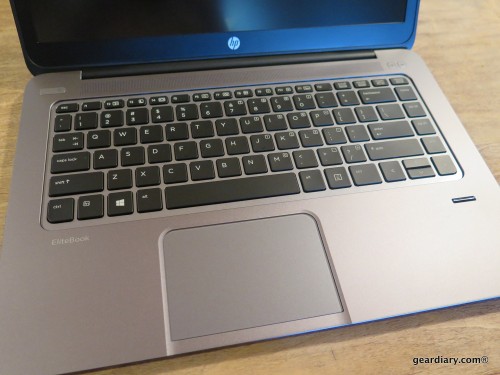 Of course, there are plenty of differences if you look closely enough, including the power button on the upper left side … 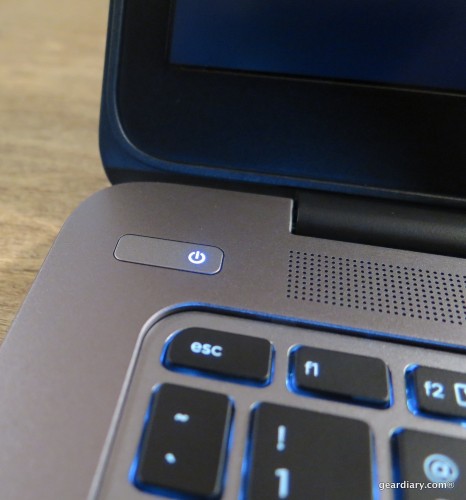 … and the wireless and mute buttons on the upper right side. 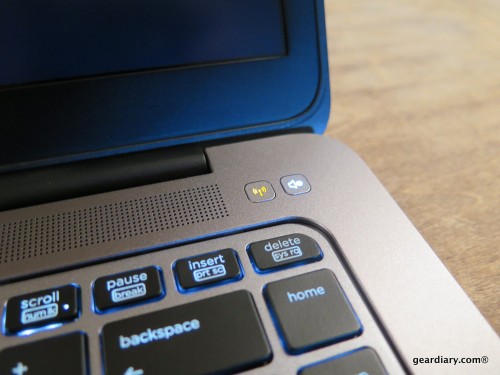 Hardware-wise, the EliteBook Folio is as svelte a laptop as one could hope for. Perhaps the only place where it stumbles slightly is on the bottom side; instead of using aluminum, HP went with matte black plastic. Granted, this probably helped cut down on weight, but it takes away slightly from the otherwise “expensive” feel of the laptop. 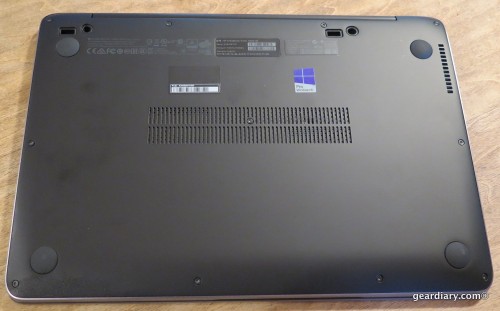 Here’s where things get a bit weird.

The EliteBook showed up at my house with Windows 7 Professional installed. I’m guessing this must be a corporate thing? Perhaps there are some businesses holding out, not quite ready to commit to 8.1, so they want to see 7 Pro loaded on Is that what’s going on? Whatever the reason, I felt like I was in a time warp! 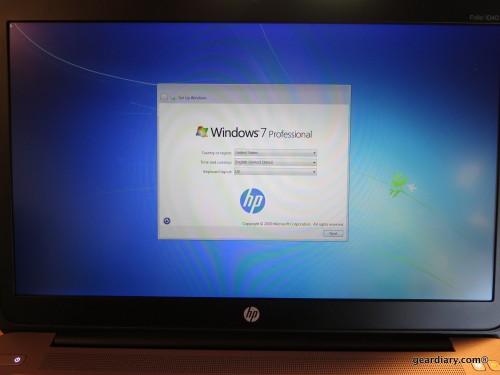 Windows 7 Professional 64 (available through downgrade rights from Windows 8 Pro): This system is pre-installed with Windows 7 Professional software and comes with a license and media for Windows 8 Pro software. You may only use one version of the Windows software at a time. Switching between versions will require you to uninstall one version and install the other version. You must back up all data (files, photos, etc.) before uninstalling and installing operating systems to avoid loss of your data.

The good news is that along with the 7 Pro recovery disks, 8.1 is included in the box…

… the bad news is that the laptop doesn’t have an optical drive! How are you supposed to install Windows 8.1 to your laptop from a disk when you don’t have an optical drive? In my case, I just inserted the disk into my husband’s 17″ MacBook Pro; it’s such a dinosaur (aging well, I might add!) that it came with an optical drive. Once I had the disk inserted, I had to make a copy of the contents, and then I pasted them to a 64GB thumb drive. I did the same with the 8.1 drivers disk, transferred the thumb drive to the EliteBook, and then I clicked “setup” in the 8.1 folder on the thumb drive and followed the install process; it was relatively painless. But still! Disks! It would have made much more sense to have included everything on an HP branded thumb drive.

John told me that he did a clean install, and by doing so he saved himself a lot of time because the drivers which showed up by doing it that way not only didn’t have to be installed, they showed as newer than the drivers on the disk, so they didn’t even need to be updated. The fingerprint scanner driver wasn’t automatically included, however, so he is still trying to get his scanner to work, too. As I said, I’ll update once that is working properly.

There is much to like about the EliteBook Folio; battery life has been decent (about 5.5 hours), which isn’t going to overly impress hard-core road warriors who want a verified 7+ hours, but it’s not bad at all. The screen is beautiful, and everything about the laptop is responsive and peppy. I love the hardware, BUT … the beauty of Windows 8.1 is how responsive it is to touch, how it is built to be touched. Not having a touchscreen on a Windows 8.1 computer seems like a waste of an otherwise lovely touch-based UI. Windows 8.1 and a touchscreen go together like cheese and crackers, like peanut butter and chocolate, like … oh, I’ll stop. I’m not gonna lie; there are days when I wonder if I shouldn’t just downgrade back to 7 Pro; at least I am never tempted to touch windows on that screen.

The HP EliteBook Folio 1040 G1 Notebook PC is available in four different packages starting at $1299; mine was nicely loaded at $1799.

What I Like: Excellent size for working at home, the office, or when traveling; thin and light aluminum body; built-in security hardware and software for businesses

What Needs Improvement: Comes with Windows 7 Pro installed; Windows 8.1 & its drivers are included on disks but there is no optical drive; I wish the touchscreen wasn’t optional; I’m having huge issues with the fingerprint scanner