As the company noted in an email that went out yesterday:

Evernote just hit a major milestone: 100 million users in 190 countries around the world. That’s a lot of people, and you’re one of them. It’s pretty amazing to know that we’ve become part of so many people’s lives. It validates the belief we had when we first started out: that the way we work was about to undergo a monumental shift. Since then, we’ve made it our mission to become the modern workspace that inspires you to achieve more every day.Thanks for being an Evernote user. More great things are ahead.

That 100 million number is impressive. More impressive is the fact that of those 100 million users, Mike is one of the first 100,000 subscribers! 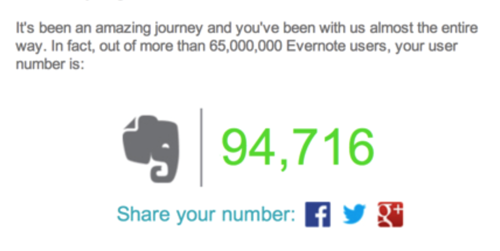 As for me… Well, I was one of the original Evernote Beta testers, and I signed up as soon as the service went live. So out of 100 million subscribers I’m…

Yes, I was the 537th person to sign up when the service came out of Beta. As one of the first 1000th subscribers, my annual subscription to be a Premium user is just $45 per year*.

*Note: All Evernote Premium subscriptions are $45 per year no matter when you signed up. 🙂

Do you use the services? If so what are your favorite features? If not… Why not?