Somewhere between Apple’s and Samsung’s last quarterly earnings reports, Dan’s review of the Galaxy S5, Dan & Judie’s Sony Xperia X2s, the Ultra, discussions with friends about a variety of tablets we’ve all used, along with the statement by the Best Buy CEO that ‘tablet sales are crashing’ something occurred to me – we’ve been here before — with Windows CE. 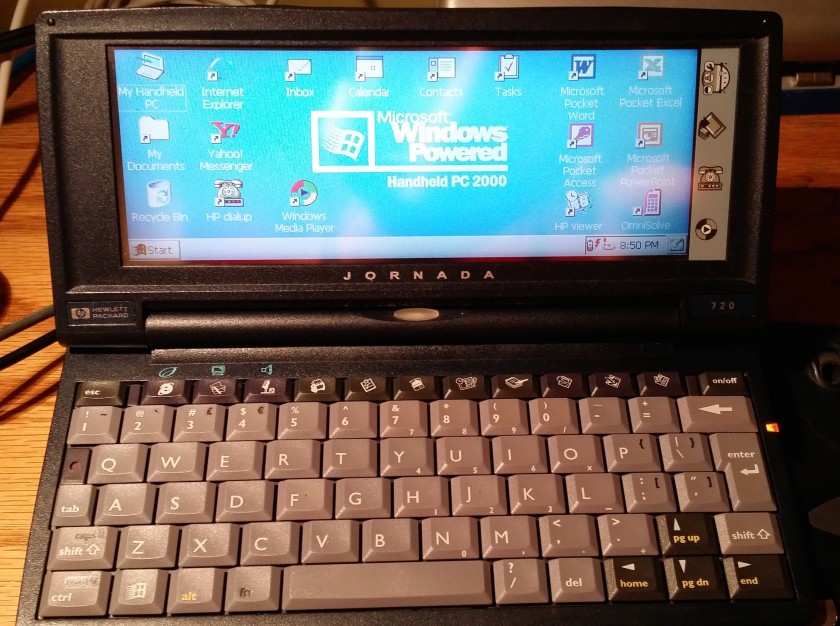 A Bit of Context

I have made a big deal about taking the ‘90% Computer Challenge’ with tablets, and how the iPad is best for me in terms of reducing my need for a laptop or other computer. That is a great and fun pursuit, but it gets to a core point: AT BEST my expectations were the ability to replace 90% of the functionality of a laptop. Oh – and that already excludes hardcore gaming, syncing my Garmin running GPS watch, ripping CDs to iTunes, and so on.

In other words, no matter what you can do with a tablet as capable as the iPad Air … you still need a laptop (or desktop). As a result, people are questioning WHY they should buy a tablet and what the need is to replace them constantly. So … they aren’t, with the result:

for the first time since the iPad debuted, tablet shipments are on pace to see an on-year decline

So this has led some to basically say ‘OMG TABLETS ARE DOOMED!’ Um, perhaps that is a bit quick to judgment, just as calling the release of the iPad the ‘start of the post-PC era’. There is one article about ‘in defense of tablets’, that says that exact thing.

So anyway, that is the context – just over four years after the first iPad was released, and for the last two quarters sales of iPads have slowed considerably, Samsung has had considerable sales woes, and the overall tablet is hurting.

As I said – we’ve been here before.

I had started doing some retrospectives on tech products from the past, and came to a stumbling block with the HP Jornada 720 series released between 2000 and 2002.

These belong to the ‘Handheld PC 2000’ OS line from Microsoft, and had some reasonable specs for such small machines. Zippy 206MHz StrongARM processors, 6.5″ screen, reasonable storage and support for wireless connections and multiple types of storage (I have a 2GB Compact Flash card and a 5GB low-profile hard drive installed).

At the time I could configure my ActiveSync client to connect to my main work PC wirelessly, meaning that I was fully functioning anywhere there was WiFi – and I had a network card that allowed me to go wired when there was no wireless (as was common back then).

But there was something that made the entire product category pretty much dead on arrival:

The apps were all drastically scaled down from the Windows equivalents.

If you look at the screen of the HP, it is pretty impressive in terms of what is there. However, around the same time you could get the Toshiba Libretto 110CT and the Sony Vaio C1 Picture book, both of which ran full Windows 98 and had a hard drive to install Office (and even some games!), and totally blew the Jornada out of the water.

On the other end of the spectrum, the Palm PDA series was being modernized and the new Pocket PC devices which offered considerable capability that allowed users to carry one in their pocket and offload a load of tasks from their main PC.

In other words, while we already had a pocket-based device that could offer some capabilities of our PC (Palm Pilot, etc), we then moved to more robust devices that offered a ‘50% solution’ and let us leave our laptops behind on occasion (Handheld PC, etc). But then the pocketable solutions ‘grew up’ and ultraportable laptops became more affordable – and suddenly scaled-back handhelds were no longer needed.

When the iPad was released and cost just $499 … people were shocked. Everyone expected it to cost much more. And even adding on a case it was still not much more than buying a Netbook – but it offered so much more speed and power and a gorgeous screen! The netbook economy collapsed quickly – partly because of the iPad, but also because non-netbook makers were already moving in on the territory.

Cheap laptops have stayed around, but they are typically big and bulky, so they didn’t compete against the iPad directly. But the iPad and other tablets did something else – they helped people prioritize functionality. Before these powerful devices, people would jump directly from their phone to a laptop, and assume that anything of substance needed a ‘real’ computer.

But these tablets ARE real computers, so suddenly people found that they could accomplish many things without ever pulling out their laptop.

But you know what ELSE is a real computer? A Chromebook. Also low-end 11.6″ Windows laptops with touch-screens (Dell has a ‘hybrid’ for $399 I just got an email about). Suddenly you have something that is thin and light and very cheap that can do all of the tasks that most people need to do. I would say that aside from my iPad/Kindle Fire HDX/Macbook Air, the family Chromebook is the most used computer in the house. Oh – and Chromebooks are generally $199.

And even the low-end of the Mac line – the 11.6″ Macbook Air – has dropped in price with increased capacity and capability. So for the price of a 64GB iPad Air with LTE and an added keyboard case you can have a Macbook Air.

Race to the Bottom

Samsung led the Android tablet push with low prices and mediocre performance. But over time more tablets with reasonable performance have emerged. The Kindle Fire HDX is much less expensive than the iPad Mini, but has great performance and excellent sound quality, and the memory up-charge is half that of the iPad.

Even at the very bottom you can get decent quality tablets for under $200 that will meet most of the needs many people bring to their tablet purchase decisions – web, email, light gaming and media consumption.

What people have learned about tablets is similar to what they learned about laptops over the last several years – you don’t need the top and the line, and the replacement cycle gets longer with each passing generation.

When the iPhone arrived in 2007, existing smartphones had screens in the 2.5″ – 3.1″ range, so 3.5″ seemed HUGE … well, ok, maybe not – but it felt pretty good size! My first Android phone, the Motorola Droid, had a 3.7″ screen, and I found that wonderfully capable. My bigger issue with the Droid was occasional slowdowns and random lag. In general the early smartphones were more power-limited than anything else.

But it isn’t just screen size – smartphones are now 64-bit multi-core speed-demons that offer as much computing power as laptops from just a few years ago. In fact, the two-year old iPhone 5 (all four in our house have one) is nearly TWICE as fast and powerful as the 17″ Powerbook G4 – the fastest Powerbook ever made, which was still available when the original iPhone launched! That is considerable progress in just 5 years!

So with larger screens, multi-app mode, great video quality and capability, and powerful processors able to perform a large number of productivity tasks … is it any wonder that more and more people are doing what this 2011 Dilbert comic talked about? Only now, just three years later, Dilbert could have said he had a tablet and gotten a similar response from Asok.

So … Where Do Tablets Go From Here?

First off, I don’t see tablets as ‘dying’ – Apple will sell more than 50 million iPads this year, which means as much as $10 BILLION in pure profit. Samsung and others are not losing money – just not making as much as they would like, and in some cases having to write down old products. What I see is the tablet market hitting a plateau … unless something changes.

As I write this, I am using a Samsung Galaxy Note 3 as my main device, with my iPhone powered off and my iPad relegated to playing Bioshock and making music. If Apple releases a 5.5″ iPhone 6 as is one possible rumor, I will jump to that and my iPad may never again see the light of day as a productivity device.

I am someone who has been there since the first iPad, have tried about a dozen different Android tablets, and still love the iPad and Kindle Fire – but as of now I have no plans to buy anything else for at least another year.

Why? Big-screen smartphones meet the needs of those other devices, as do smaller laptops. The combined Galaxy Note 3 and Macbook Air meets my needs as well as the iPhone, iPad and Macbook Pro.

For Apple to win my iPad business back for the ‘iPad Air 2’ or whatever, a few small things and a couple of big things need to happen … here are the little things:
– Increase RAM – having tabs reload constantly on a Chromebook is one thing, on a top-end iPad Air is embarrassing.
– Improve the value proposition – yes we know it is a luxury item, but making the upgrades and topped-out price more reasonable will help with the perception.
– Make it more rugged – water-resistance, screen durability and so on go a long way. Include a Smart Cover, or something – make it a friendly and durable device out of the box.

As for the big things?
– Make it a laptop replacement – make it ‘outside world aware’, integrate with external storage, easier connection to keyboards, and so on. Any time I need a ‘real’ computer I am reminded that I bought an over-priced toy.
– Make it the ‘go to’ place for robust apps that will make the iPad a ‘stand-alone’ device. While not many people are buying the (overpriced) Surface Pro 3, I have no doubt that it IS hurting iPad sales. Why? The focus on ‘real’ programs rather than ‘apps’.

I believe that if Apple upscales the connectivity and app capability of the next generation of iPads they can revolutionize the tablet market again. Will they cannibalize some low-end Mac business? Sure – but that has never stopped them before!

What are YOUR thoughts on the future of tablets?