Youdagames’ flagship game Governor of Poker debuts in the Nintendo eShop for the Nintendo 3DS handheld console in Europe and the United States. This award-winning game is best for poker players with some experience while the controls are easy-to-use for everyone. Governor of Poker was previously released on PC, Mac, Facebook, Android, iOS with a sequel.

In the scorching town of San Saba begins your journey to building your reputation and riches up to take over the whole state of Texas. Play your cards right and win big in numerous poker tournaments and cash games to buy real estate, transport and eventually entire towns! Blow up some steam and bring fellow Texans to their knees as you grow your wealth and become the one and only Governor of Poker, in the most unique poker game to hit Nintendo 3DS!

Set in the town of San Saba, Texas, Governor of Poker has nice simulation elements as players get an easy-to-use interface plus plenty of rewards as players progress through the game.

Cash, real estate and transportation are the main rewards for succeeding at ultimate Texas Hold’em Up poker tournament.

Players can use three profiles and can choose the gender of their chosen character who aims to be the best player in the state. Online leaderboards are a great addition as well, so bragging rights can extend beyond friend circles and self-satisfaction. An online multiplayer option would have given experienced players even more challenges beyond the CPU players who work well for the most part, but occasionally annoy with their voices. 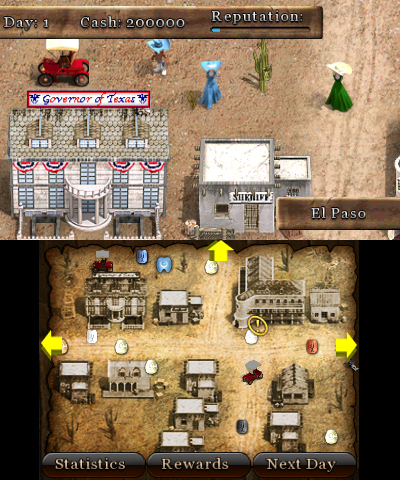 Governor of Poker requires players unlock ten towns to progress in the main story mode to become the Governor of Texas. Players can also use any of their unlocked towns as a host for the quick play mode. Players also get a variable reputation bar that directly relates to their wins and losses.

Once players beat the last player in a town they are rewarded with a transportation reward (horse or carriage with horse) so they can travel to the next town. Players can also wager real estate or even leave games early if they like. Players earn income with acquired rewards, which a player can use to get in higher entry competitions. 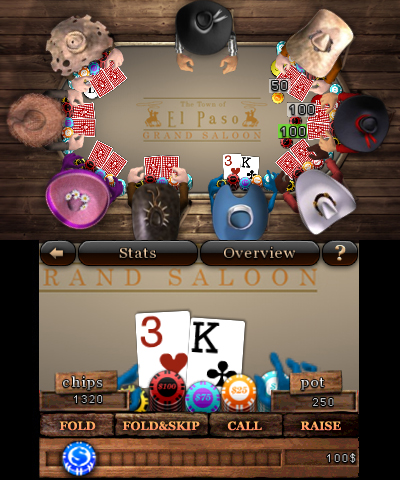 The relatively sharp graphics port over well to the Nintendo 3DS and developers use the optional 3D visuals to accentuate player hands and other important details. The detailed statistic screen shows the player status and progress well. The only sub par graphics are non-vital like a player’s tapping hand that’s a bit fuzzy. 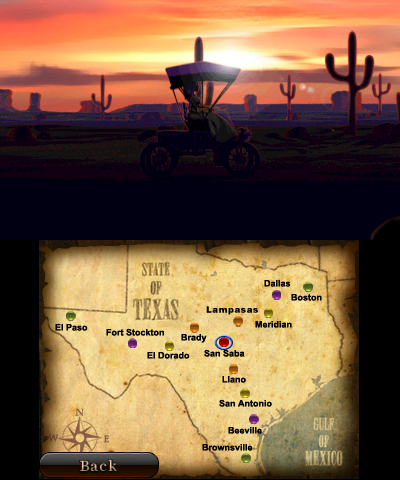 The interactive town maps makes navigation as easy as the controls are. Players can easily get strategic by exploring the environments and interacting with town residents, but players new to poker get no clear playable tutorial. Major events also appear in news flashes in the local papers.

The text and statistics track the games well, but new poker players simply cannot pick the game up easily here as developers as some nice role-playing and real estate simulation elements into the player progression. The western music is nice and the sound effects of local animals like horses and crows add some nice authenticity and escapism to this game.

What Needs Improvement: no online multiplayer option, a few CPU characters with unappealing voices, no base tutorial for beginners,