A few weeks ago I reviewed the Pivotal Living fitness tracker, and I concluded the following: “Pivotal Living is a company to watch, and I think if the bugs and kinks get ironed out, the Pivotal Life 1 is a very cool product.” I wanted to give them a few months, but here’s the truth: Don’t buy it. just don’t.

I have been quite lucky, in that my band has not had the static reset issue so many have experienced. The folks at the Pivotal Living Support Facebook page (a non-affiliated user group) volunteered whether they had the static reset issue, and the result is that it’s highly likely if you use this band that you will have an issue. Here’s a visual breakdown on a map of where folks live and whether they’re experiencing resets (Blue means no resets, red means resets-this is a small cross-section, but the overwhelming majority of respondents had static issues): 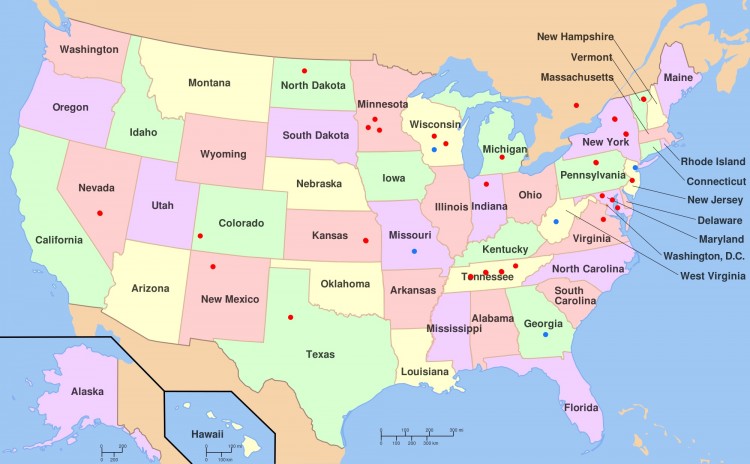 So that’s issue one, and to their credit Pivotal Living is trying to help by offering warranty exchanges with new welds on the bands to prevent the resets going forwards. It seems like there have been mixed results with the new bands, but at least the company is trying. Unfortunately, they seem to be woefully unprepared for any other issues that pop up, and they’re struggling to keep up with the volume of bugs being reported.

Here’s a good example. I signed up to beta test their new Android app, which they hoped would alleviate many of the issues for Android users. I had to uninstall my existing app and install the beta, and when I went to sign in the app didn’t recognize my password. Not a big deal, I just requested a new password. And then I waited … for four days. Pivotal Living’s only comment on this, from their Android testers Facebook group, was that they knew there was an issue, and they were working on it. I finally managed to get the password to reset, and I still can’t log into the app. Again, Pivotal is aware that some percentage of their testers are unable to log in, and they’ve only promised to address it in a future build. So basically, I went from having a sort-of functional sync (sometimes it synced, sometimes it didn’t), to being completely unable to use it on my phone, and the company’s only commentary was “well, we’ll fix it soon, we hope”.

I still maintain they did a great job with the hardware for the Pivotal Living Tracker 1.

I like it enough that I still wear it, but only because I can sync it to my iPad most of the time. The iOS app is less buggy in that it (mostly) syncs, but it’s still woefully underdeveloped, and based on the issues the company is currently fielding, it’s probably going to stay that way for a while.

This is a product that was released far too soon, to far too wide of an audience, before it was properly tested. And that’s the one thing the company has yet to acknowledge.

They’ve apologized, they’ve promised new fixes soon, but all these are right now are empty promises. Even if they get their act together, this inauspicious start is going to make their entrance into the crowded tracker field even tougher. If for some reason you’re considering buying one, please don’t. Not right now, and if the company continues to think issues like logging in and being unable to sync aren’t high priorities, then you shouldn’t ever buy one.

As soon as I find a fitness tracker I like more, I plan to give up on Pivotal Living.

Have you ever given up on a company or service after being burned too many times?