My son loves (LOVES) the book “Goodnight iPad“. I’ve read it so many times I have it memorized, so I usually “read” it to him once it is lights-out. Half the time he’s asleep before I finish. Last night I realized some of the book’s technology references are already outdated, and it’s only four years old! 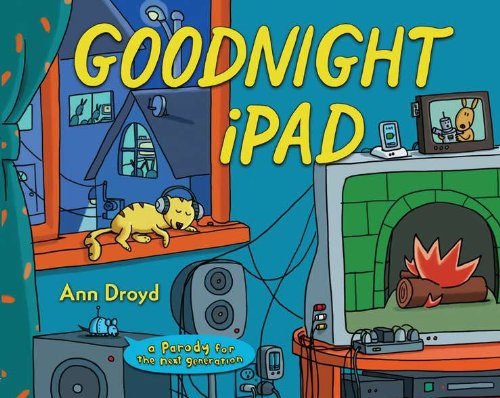 The book lists a lot of gadgetry around the room: an iPad, a computer playing “Doom”, a screen saver of Angry Birds, NOOKs, an LCD HDTV, a Blackberry with a singing ringtone, texts, Facebook, Twitter, Macbook Air, and of course plugs and chargers. However, how many of these would you actually find in a room these days?

–iPad: Yup, still find one of those for sure.

–Kid playing Doom: Video games for sure. Doom on a desktop? Probably not.

–NOOKs: HA! They’re hanging on by a thread.

–Singing ringtones: The specific reference to Eminem is out of date, but the concept is probably still going strong.

–Social Media: So far so good. Facebook and Twitter are still going strong, and at least there isn’t a MySpace reference!

–Android: The book dodges obsolescence by referencing Android as a whole, not any particular version or manufacturer.

–Plugs and chargers: It’s going to be a very long time before these go out of date.

So a quick tally shows eight listed items still exist, while four reference items that are nearly out of date or are past their prime. Not bad for a book that was restricted by rhyming and rhythm as part of their gadget references! I would assume if it were written today there would be references to Apple Watches, Fitbits, and maybe Chromecast…what do you think “Goodnight iPad” will reflect in the future?