In articles I have no experience and probably shouldn’t be writing about, let’s talk about the Orgasmia, which is a Bluetooth vibrating implant that might possibly rule out the need for a male companion. (yep, I wrote that.. bear with me.) 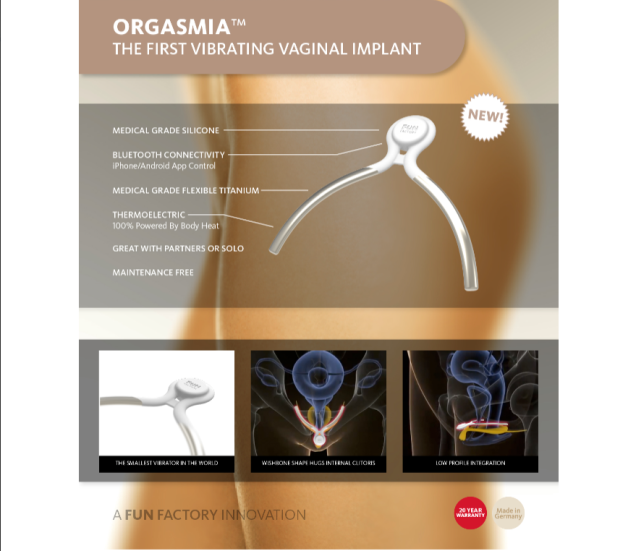 Disclaimer: This actually is a real thing. I called the doctor and confirmed that this is actually a procedure being done. It surprised the hell out of me, too. So before you say “this is an April Fools joke”.. trust me, I’m not that funny. 🙂

The Orgasmia was created by the folks over at The Fun Factory (I’ve already planned a trip) and is a V-shaped, Bluetooth controlled implant that sits against the clitoral legs, which stimulates the clitoris’ inner structure. As of right now, there’s only one plastic surgeon based in Beverly Hills that offers the procedure, but there will for sure be more available when the product takes off (which it more than likely will).

If you’re wondering exactly what the Fun Factory is, it’s not one that Willy Wonka works at, and you certainly can’t take the Magic School Bus there. It is actually a sex toy company that have accessories you probably won’t catch at the Final Four this weekend aptly named ” Smartballs.”

Quoted from Fun Factory themselves:

Orgasmia™ emits a mild, silent vibration that targets the entire clitoris, not just the glans. The device can be used on its own for hands-free orgasms, to enhance the experience of sex with a partner, or to address a variety of sexual complaints, including unsatisfying intercourse, extended separation from a partner, or even lack of time for sex. Even better than the long-awaited “female Viagra,” Orgasmia™ gives women control over their arousal and pleasure.

As a man, I can’t lie, even I’m pretty intrigued by the words. Now I’ve never read Fifty Shades of Grey, but if any chapter uses the terms “controlled arousal” and “female Viagra” (Viagra is cheating by the way, but I’ll accept it) I need to take a trip to the bookstore. I digress. A lot of people might be curious as to how exactly the implant might work. The Orgasmia is encased in medical-grade silicone and the motor nestles against the pelvis. It’s been reported that after three or four days you will not even notice that the implant is even there.

Here’s where it gets tricky. Remember I said this is a Bluetooth enabled implant right? So how can you charge it? USB maybe? Nope. Technology has come a LONG way, and inspired by Thermal Electric watches, the Orgasmia recharges using body heat. The Bluetooth feature can be synced ro respond to remote commands from a host of electronic devices, including your smartphone. Just you know, don’t leave it around a child, like in “The Ugly Truth” movie starring Katherine Heigl.

Nevertheless, a remote-controlled sex toy will of course have a price tag attached, with the Orgasmia procedure included the entire thing will come up to $6500. But the cost of being technically a sex robot that can be stimulated at any point of the day is priceless.