What is Vaping? What are E-Cigarettes?

By definition, ‘vaping’ is the act of inhaling water vapor through a personal vaporizer or electronic cigarette. Vaping eliminates 4000 chemicals and carcinogenic compounds that come from real cigarettes, without compromising the act of ‘smoking’ itself. Vaping can also contain nicotine as an option for maximized effect of cigarette smoking. 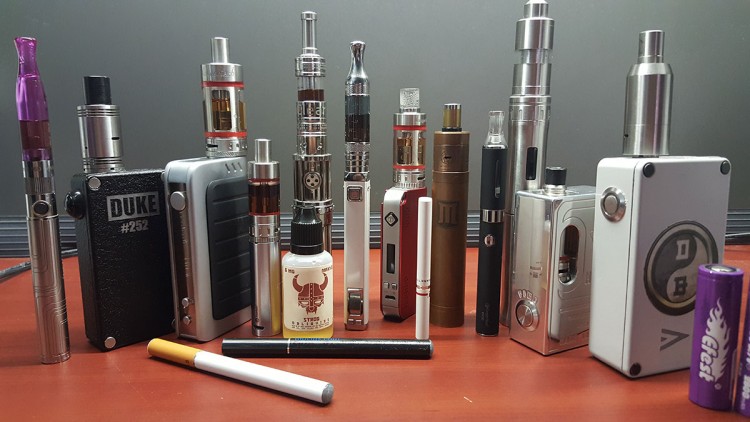 E-Cigarettes is short for Electronic Cigarette, a term I really do not like, but it’s what they are called unfortunately. An Electronic Cigarette is a cigarette-shaped device containing a nicotine-based liquid that is vaporized and inhaled, used to simulate the experience of smoking tobacco. The truth is that E-cigs are much more than a cigarette-shaped device now. In the photo above, there are three e-cigarettes that match the cigarette-shaped device, but the rest of the devices are also considered e-cigarettes. They vary widely in price ranging from $10 to $350 and more. In the photo above, you have pretty much every e-cig style on the market as well as batteries that some of the devices take and a bottle of E-Liquid.

Vaping is a newer alternative to smoking. Basically, vaping is a verb describing the use of a vaporizer. The process involves heating up e-liquid which is then atomized into vapor that is inhaled. This vapor carries the nicotine into the lungs which is absorbed into the bloodstream.

The Oxford English Dictionary recently added “vape” to the dictionary, actually naming it Word of the Year for 2014, with the definition “Inhale and exhale the vapor produced by an electronic cigarette or similar device.”

Vaping is not approved by the U.S. FDA as a “smoking cessation” product.

“The nicotine inside the cartridges is addictive. When you stop using it, you can get withdrawal symptoms including feeling irritable, depressed, restless and anxious. It can be dangerous for people with heart problems. It may also harm your arteries over time.”

“So far, evidence suggests that e-cigarettes may be safer than regular cigarettes. The biggest danger from tobacco is the smoke, and e-cigarettes don’t burn. Tests show the levels of dangerous chemicals they give off are a fraction of what you’d get from a real cigarette. But what’s in them can vary.”

“E-cigarettes may be less harmful than cigarettes,” Drummond says. “But we still don’t know enough about their long-term risks or the effects of secondhand exposure.” – WebMD

You may have seen reports pop up here and there that claim that e-cigs are producing large amounts of dangerous chemicals like Formaldehyde. While it’s better to be safe than sorry, you have to read these reports and understand that some of them are being made to scare users away. These reports are getting out to the public and the facts are not being presented properly. Check out “Spreading fear and confusion with misleading formaldehyde studies” written by Clive Bates in January 2015. Another good read is “Is Vaping Worse Than Smoking?” from Joe Nocera from the NY Times.

If you are interested in research on the health effects of Vaping and E-cigarettes, Dr Farsalinos has dedicated a lot of time and money studying the effects. Check out ecigarette-research.org for tons of information.

Phil Busardo, one of the most in-depth e-cigarette reviewers out there, has tests of 18650 batteries on his site.

Short History of the E-Cigarette

In 1963, Herbert A. Gilbert patented a device describe as “a smokeless non-tobacco cigarette” where he heated moist, flavored air instead of burning actual tobacco. The Patent was granted in 1965. In 2013, Gilbert said that the modern electronic cigarette still follows his lead that never took off back then.

Hon Lik, a Chinese pharmacist is credited with the modern e-cigarette. When his father died of lung cancer in 2003, he patented the modern e-cig. This version was sold commercially in China in 2004 and his company started exporting these devices in 2005-06. He received an international patent on this product in 2007. In 2013, Imperial Tobacco’s Fontem Ventures acquired the intellectual rights to Hon Lik’s work for 75 million dollars.

In the last few years, many companies that were selling and innovating e-cigarettes, that many call cigalikes today, have been purchased by large tobacco companies to make up for lost revenue from traditional tobacco sales. Tobacco companies initially dismissed e-cigarettes as a fad. They changed their tunes quick. In 2014, according to the Wall Street Journal, world-wide e-cigarette sales were around $7 Billion.

In the last few years, electronic cigarettes have soared in popularity which has spawned rapid innovation. Companies are releasing new and improved devices right and left. If you purchase the latest and greatest regulated box mod today, you might be disappointed 2 weeks later when the next best thing is launched.

The availability of the more advanced E-cigs is in jeopardy in the near future. There is a ton of legislation that is being lobbied for in Washington by the Tobacco companies and Pharmaceutical industry that would regulate the types of devices available for sale in the US. Vapers fear that if all goes wrong for the vaping industry that closed systems will be the only type of e-cigs left standing when the dust settles. That would mean that only “cigalikes” would be left standing when the dust settles. Either way that it goes, we probably have a couple of years of choice left.

The Anatomy of an E-Cigarette

All E-Cigarettes have several components, but the main parts are the same across all types of devices.

These 3 parts are what makes up most cigalikes style e-cigs. The terms are changed a bit with other devices.With cigalikes, the battery is contained inside the device and is not replaceable. Some are rechargeable, some are not. 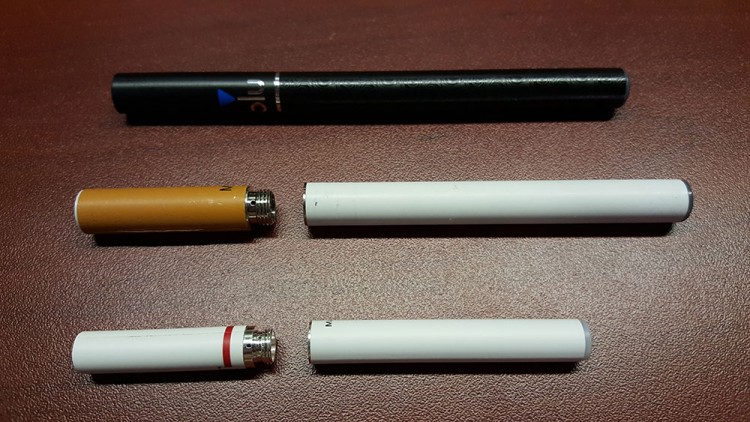 Cigalikes-As I mentioned already, the 3 parts are the Battery (right), the atomizer, and the cartridge (both left). With the bottom two cigalikes pictured, the cartridge with the e-liquid and the atomizer are housed in a replaceable module. Some of them, like the Blu at the top, are no good after they are spent. You just toss those types and buy another. The length of time it takes to use all the e-liquid in these type e-cigs vary and none of them last as long as other types of e-cigs mentioned in this article. 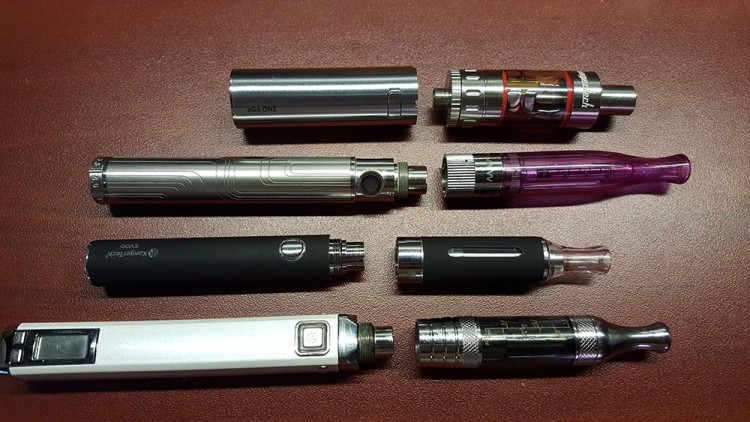 Ego Style Batteries-The Ego style batteries are pretty much the same as the cigalikes but the cartridge is replaced with what we call a cartomizer (right). They still have a battery (left), but they have much larger battery capacities than the cigalikes. The battery capacity is measured in mAh (Milliamp Hours). There are several factors that contribute to the battery life of an e-cig, but the main ingredient is mAh. The larger the battery, the longer they should last. 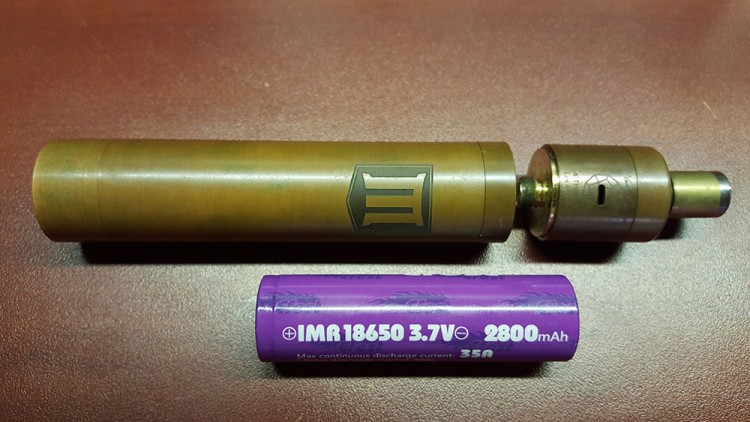 Mechanical Mods-Just like cigalikes and Ego style devices, a mechnical mod (mech mod) works the same way. The main difference is that a mech mod has no circuitry that regulates the voltage that the battery applies to the coils in the cartomizer. Most users of mech mods use a different type of atomizer called an RDA (left). RDA is an acronym for Rebuildable Dripping Atomizer. This is where you drip e-liquid directly on the wick/coil, it only holds a few drops at a time, silica wick is mainly used on these. Another difference between Ego batteries and mech mods is that the battery is replaceable. Most of them use an 18650 battery (bottom) and can be removed for charging. The batteries for tube mech mods are slid into the tube (right). The bottom of the tube typically has a switch that completes the circuit with the battery and applies voltage to a connector that the RDA (left) attaches to. 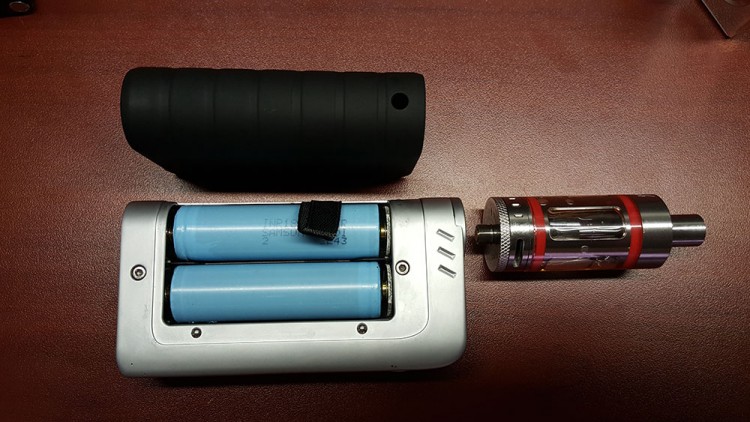 Regulated and Unregulated Box Mods-One of the most popular devices today is the box mod. They come in different sizes and shapes, but they all work the same. They have batteries housed inside the box (left) and have a connector on top for your atomizer (right).

An unregulated box mod is the same as a tube mech mod, except the wiring and batteries are housed within a box rather than a tube and sometimes offer a little more battery safety with the use of a Mosfet chip in higher power devices.

A regulated box mod is a device that makes use of a circuit board that regulates current. There a several types of chips in use these days but they all have the same basic functions. They allow you to set the wattage to match the resistance of the coil in your atomizer.

There are several types of e-cigs and they come in all shapes and sizes. Here are examples of most of the different types available today. 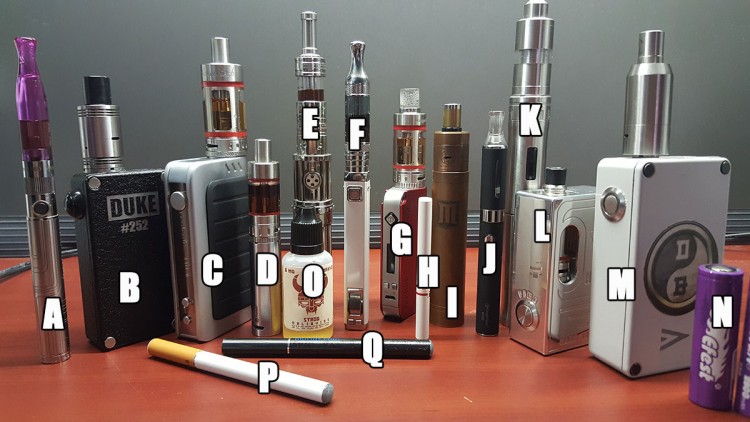 I planned on writing this article more than 6 months ago and shot the following video to accompany the article. It’s a little dated, but still shows the different types of E-Cigs (vaporizers) available 6 months ago.

E-Liquid, also called e-juice and juice, is the liquid that is heated by the atomizer to create the vapor that you inhale. It’s a water-based liquid infused with nicotine. It comes in an array of flavors, consistencies, and nicotine levels.

Most of the time, e-liquid is made up of primarily propylene glycol (PG) or vegetable glycerin (VG). Most e-liquids are made of a combination of PG and VG. The current trend in vaping is max VG liquids, giving the vaper larger clouds. PG and VG are the base of most e-liquids and they are flavored with various food grade flavorings. Nicotine is added to most e-liquids and are mixed at various levels, measured in mg. Most full flavor e-liquids are 18mg to 24mg in strength.

Here are the ingredients found in most commercially available e-liquids or e-Juices.

We need to get ahead of proposed FDA regulations now. I am a firm believer that E-Liquid labels need to present a wealth of information about each juice they sell. Unfortunately, most companies do not provide some of the critical information.

In my opinion, a complete label should include the following:

In addition, a good practice is to also include batch information, including the date mixed.

Child Proof Caps are a must-have feature for all juice makers in my opinion.