If you’ve got an indoor cat, then you’ve got a litter box of some kind. If you’ve got a conventional litter box, then you know all about the bending, scooping, and discarding of clumped feces and urine that is a necessary evil of cat ownership. There is a better way, and that way is the self-cleaning Litter-Robot Open Air. 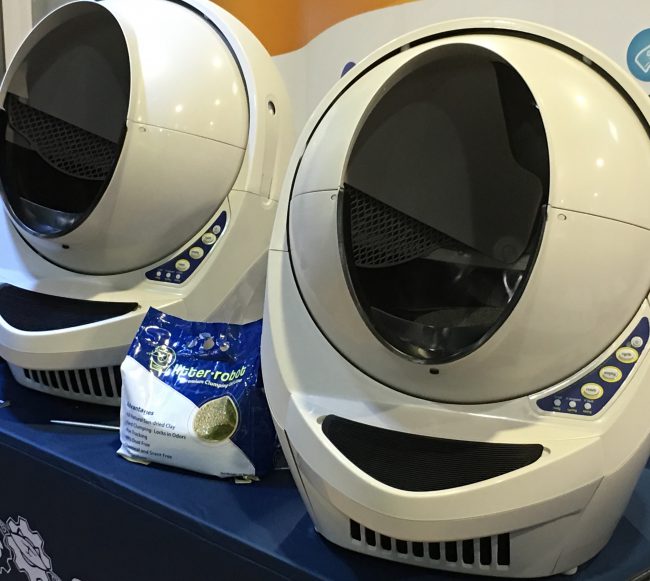 I’ve been using an automated cat litter box of one kind or another since my first Litter-Robot in 2008. I flirted with other automated litter boxes over the years, but nothing could top the simplicity and no-fuss method employed by the original and follow-up Litter-Robots. Now we are on version three, the Open Air. Why am I so pleased with Litter-Robots in general and the Open Air specifically?

1. Our adult cat took to the Litter-Robot like a champ.

Hephaestus, or Heph as I call him, came to us as a full-grown cat; his previous owner was moving, and Heph wasn’t welcome at the new place. So when we brought Heph into our family, he was not only already set in his ways, we found out he could be a bit stubborn about learning new rules (like not to shred the corner of our couch – ugh).

Because the Open Air wasn’t yet available, we had purchased a Litter-Robot II for Heph before he arrived. It took a day or two of leaving a regular litter pan in front of the Litter-Robot to get him used to the area, and then once he was used to that, we removed the pan and moved a clumped piece of his waste into the Litter-Robot so that he would (hopefully) understand that was the new litter box’s purpose. He figured it out within a day.

When the new Litter-Robot Open Air arrived to replace the Litter-Robot II, Heph didn’t need any coaxing; he stepped right into his new throne like a boss!

If you have a cat that is used to a conventional litter box, you’ll likely have to go through a version of the steps that we performed. But rest assured — cat’s are smart, and they will quickly figure out the purpose of the Litter-Robot.

2. No need to ever scoop litter, because the Litter Robot Open Air does it for you.

I hate scooping litter, and it is the one job that if I could delegate to anyone else, I would find a way. The Litter-Robot uses a sifting process that separates all of the urine and feces clumps that are left after your cat does his business from the clean litter.

Once a week or so, you’ll have to pull out the tray at the bottom, remove the trash bag that was set there, replace the bag, and then take the refuse outside. There’s no need to hunch over a pan with a scooper, and there is no need to make it a part of your daily routine. That’s pretty awesome.

3. The Litter-Robot Open Air is perfect for big cats and/or multiple cats.

The Open Air has a larger opening than any of the other Litter-Robot models; it is perfectly sized for larger cats — even obese ones — and it can also handle usage from multiple cats.

You might have to empty out the tray a bit more often if you have multiple cats using the Litter-Robot, but that’s still easier than sifting through multiple cat boxes or having to sift through the same cat box multiple times in a day. 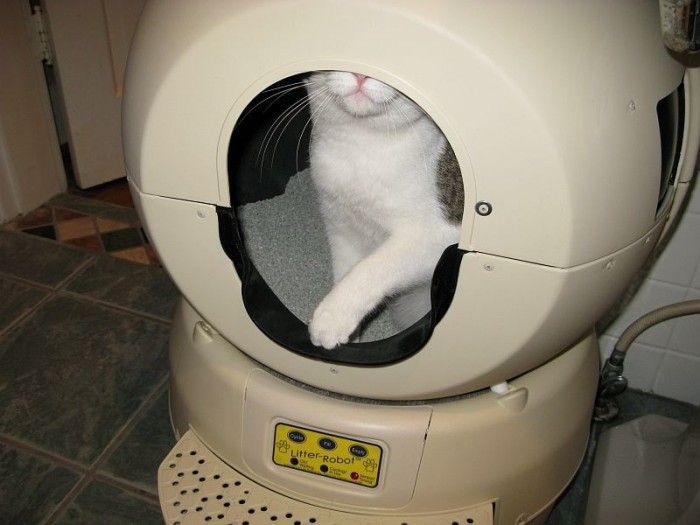 This is the opening on the original Litter-Robot, being modeled by Avah.

Let’s face it, open cat boxes smell. Will the enclosed Litter-Robot system completely eliminate odors? It honestly depends on your cat, his diet, and the litter that you use. When Heph came to us he was still intact, and even though we got him fixed almost immediately it took some time for the rankness of his bathroom odors to calm down. The Litter-Robot helped greatly with this, but it couldn’t completely get rid of the noxious smells Heph produced. Changing his litter to Arm & Hammer’s multi-cat odor-control formula from Tidy Cat helped greatly, and so did changing his food from a premium wet mixed with dry diet to a premium dry diet. Now, there is virtually no odor coming from his box.

5. The Litter-Robot Open Air’s waste drawer full indicator lets you know exactly when it is time to empty the waste bin.

It may not seem like a big thing to remember to check to see if the bin needs emptying at least once a week, but with everything else about the Litter-Robot being automated, the blue glowing dot indicating that the bin is full comes in very handy. Because Heph is our only cat, we can go as long as a week and a half without removing the bag containing his waste in the bottom bin, but the minute that light comes on — if it hasn’t already happened, it’s emptied.

6. The Litter-Robot Open Air has a night-light that’s handy for older cats and you.

When something moves in front of the Open Air, a blue LED comes on which lights the inside of the bin and the area in front of the Litter-Robot. The company says that this is good for older cats; I don’t pretend to know what a cat can or can’t see, so I’ll take them at their word on that. I do know that the light has been handy for us.

7. The Litter-Robot Open Air is quieter than previous models.

I’ve never kept a single Litter-Robot in a room that was carpeted, so each model that I’ve owned has had nothing near it or under it to help muffle its sound. The first two models seemed about the same volume, which in a non-carpeted room with tile or wood floors could seem a bit loud. The Open Air is in our laundry room, which has wood floors and no carpet; it seems much less noisy than the model that sat there previously. If you keep your Litter-Robot in a room far away from where the family gathers or sleeps, then none of the models’ cycle noises will likely bother you, but if you have a small house with an open floor plan (as we do), you’ll appreciate the quieter cycling.

Because it is a bit of a steep climb in and out of the Litter-Robot, there is more opportunity for your cat to shake off any litter clinging to his feet before he gets out of the box. In previous models, it was possible for a cat to track litter to the lip in front of the box; when the Litter-Robot would cycle or the cat dismounted, this litter could get scattered. The new angled design of the lip takes care of that issue; any litter brought to the lip is now cycled back into the box when the dome rotates. That’s less mess for you, and it’s peace of mind because every cat likes to climb where he’s not allowed when you aren’t looking. Ugh.

Complaining about cleaning your cat’s litter box is an age-old first world problem, and admittedly, the Litter-Robot is a first world solution. Is it absolutely necessary to replace your cat’s litter tray with a pricey fully automated Litter-Robot? Of course not. But if you own a cat, and you are the one responsible for keeping his or her litter box clean, if you can afford one of these, you will absolutely appreciate the convenience the Open Air offers.

The Litter-Robot Open Air retails for $449, and it is available directly from the manufacturer. You’ll save $25 when you use this affiliate link.

What Needs Improvement: They are pricey, and there is no way around that fact

Update: April 17, 2020: Cat parents can sign up to receive a monthly subscription cat box filled with unique toys and premium products. The first box will ship in May. For a limited time only, preorder and get $10 to use on your next purchase at Litterbox.com!*

*Limited time only. Customers will receive a $10 voucher to use at Litterbox.com approximately 35 days after eligible preorder purchase of a Litterbox.com subscription box. Offer not valid upon cancelation of order. Voucher is one-time-use, one per customer. Must be used in a single purchase. Cannot be combined with other offers. Cannot be used on prior purchase. Cannot be applied to recurring subscriptions. Not valid on Litter-Robot branded products. Expires 12/31/2020.