One of the things that so many health trackers have in common is that they look exactly like what they are — utilitarian step counters worn on our wrists. All of them track steps, many track sleep, and some throw a few extra tricks in to sweeten the package. The Bellabeat Leaf Urban tracks steps, sleep, meditation, and reproductive health. 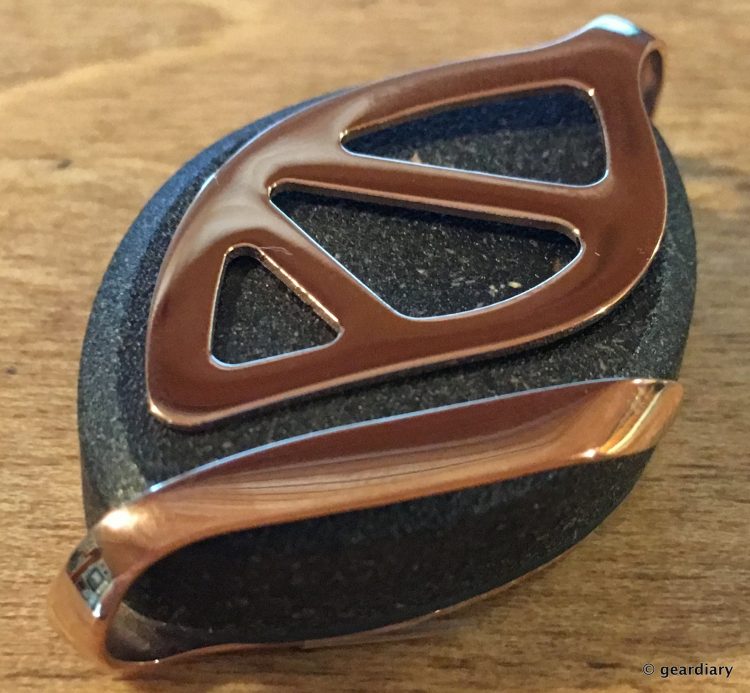 The Bellabeat Leaf Urban can be worn as a necklace, a bracelet, or as a clip-on; all of these methods are included in the package. There’s also a little screwdriver for removing the back when the included battery needs changing along with a set of four extra screws. 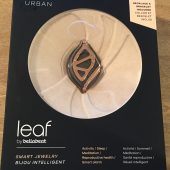 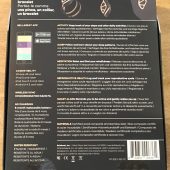 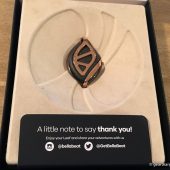 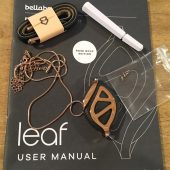 The business part of the Bellabeat is the Leaf; from one gold end to the other, it is approximate 2″ long by 1.1″ wide by 0.4″ thick. The Leaf looks like it is carved from some kind of stone (I’m pretty sure that it is plastic, though), and it is available with a silver or rose gold accent. The overall effect is aesthetically pleasing. 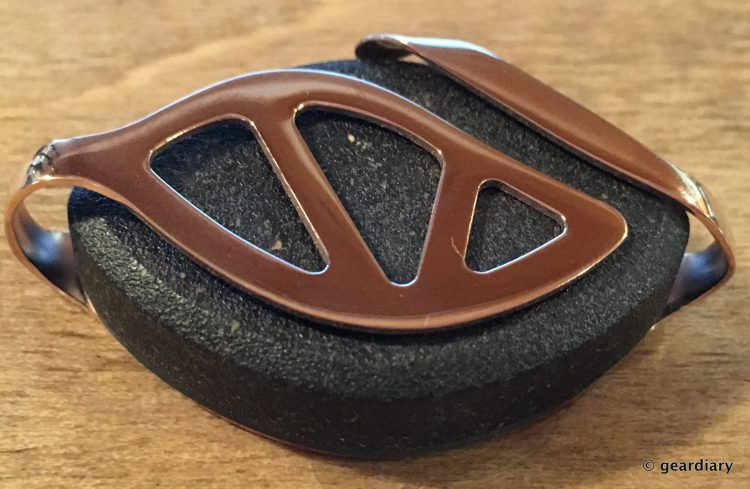 The only con that I can find to the Leaf Urban’s design is something that affected me specifically because I had to wear a compression sleeve on my right arm for a couple of weeks after fracturing my elbow (don’t ask). I managed to snag the loose end of the gold metal on the compression sleeve several times when I was too lazy to remove the Leaf Urban before removing the sleeve. As a result, the metal end has lifted slightly; I’ve tried mashing it back down, but it’s not cooperating. This is totally my fault. 🙁

The Bellabeat Leaf Urban can act as an activity tracker; it can track your movement during the night (including the quality and duration of your sleep); it will guide you through meditation exercises; keep your stress at bay with their new stress tracking feature; track your periods, fertile days, and give you feedback about your reproductive health; it will give you feedback and inspiration as you work toward your goals; it will encourage you to get moving with an inactivity alert; and it will wake you each morning with an alarm if you want it to.

The Leaf Urban can store up to 14 days of data, so if you forget to wirelessly sync you won’t lose all of your info. Best of all, the Leaf Urban is sweat-proof, rain-proof, and it can withstand short immersions in water; while you can’t swim with it on, you can keep it on while in the shower or while washing dishes. That’s pretty huge considering that so many tracking devices will die if you forget and wear them in the shower (I’ve lost two Fitbits and a Withings Pulse that way, no joke).

The Leaf Urban can be worn as a clip by itself …

I prefer to wear it as a bracelet, like this …

To get started with the setup, you’ll need to pull the plastic tag that’s keeping the battery from making contact. 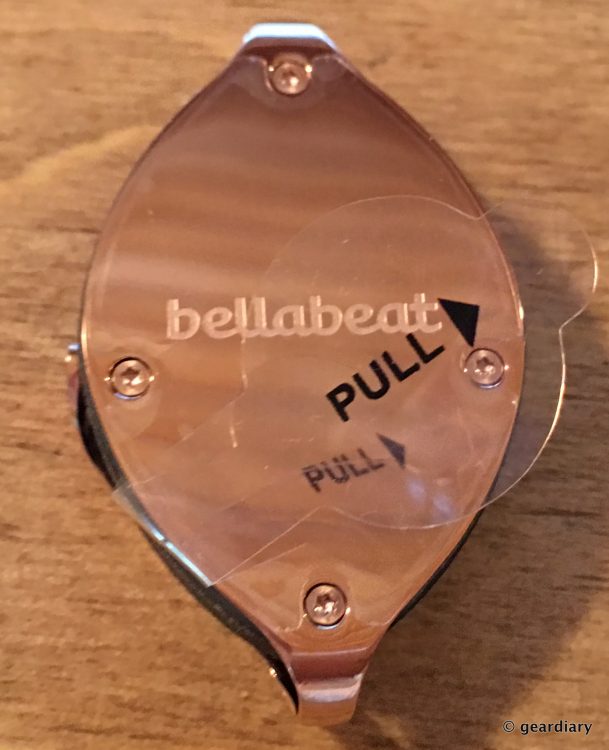 Note the four screws on the underside; when the included battery runs out (in about six months), you’ll need to remove them to replace it.

Now that you’ve removed the tag and activated the battery, it’s time to download the Leaf app and get started; open the app, and follow the directions for setup. I should mention that in the month or so that I’ve been using this app, there have been several updates introduced that improved my user experience; the most recent was the addition of the stress tracker. 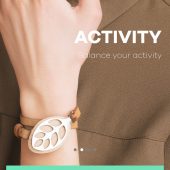 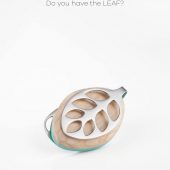 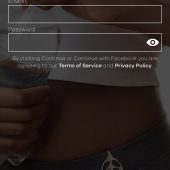 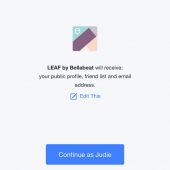 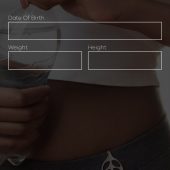 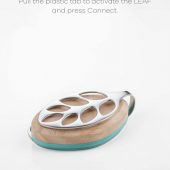 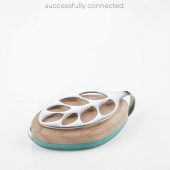 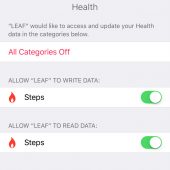 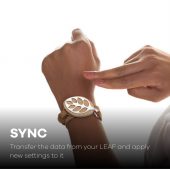 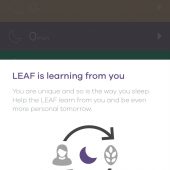 Once you’ve got everything set up, this will be your dashboard. On it, you’ll be able to see the amount of time you’ve been active, how many hours you slept the night before, if you’ve meditated, your stress level, and period tracking.

When you click on each activity, you see a more detailed view. For instance, these are my steps on the 8th. 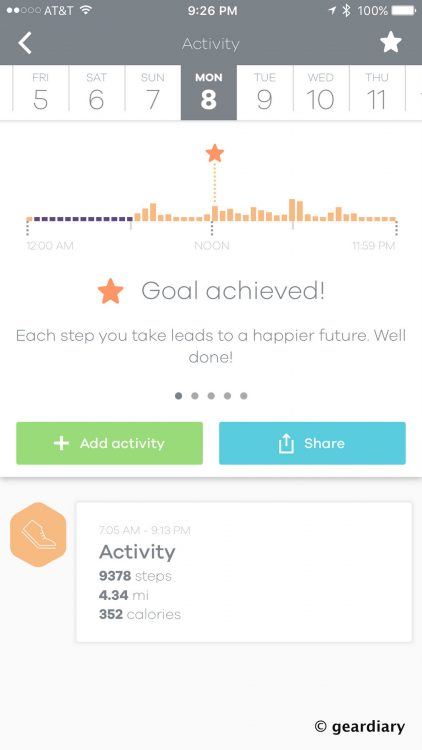 Here’s what you see when you click the sleep tab. No, I don’t usually get this much rest; I tend to get 4 or 5 hours a night and then when I can I’ll take the opportunity to crash early and sleep in. 😉

The Meditation part of the app is pretty cool. I have several meditation specific apps that I have bought, and I’ve made a conscious decision to try to meditate — or at least sit still and listen to the soothing sound of someone telling me what to focus on as I try to relax — and it really does seem to help me de-stress. There are quite a few options for types of meditation built into the Leaf app … 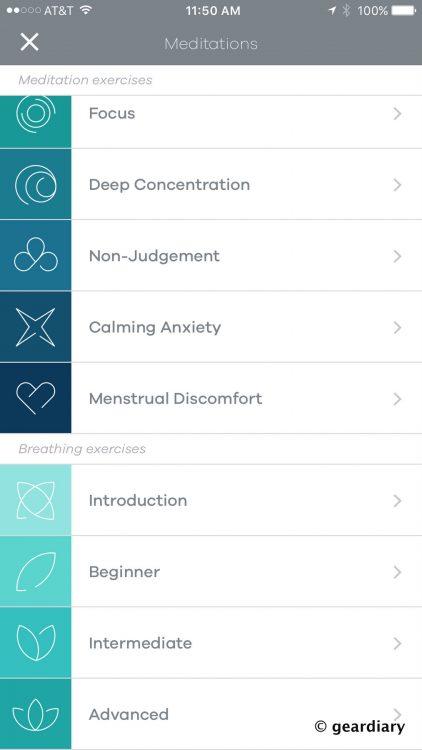 And when you complete a meditation through the app, you get a gold star.

A recent update added the ability to track your stress. The Leaf Urban appears to use a mixture of data from your recorded sleep, exercise, meditation, and period cycle to give you an idea of what kind of stress you are under. I like this feature, as it is a good reminder to keep everything in balance.

The final feature is the Period Tracker. I’ve been using the standalone app Clue for ages, but it is nice to have the same feature built into my fitness tracker app.

The Bellabeat Leaf Urban is a pretty piece of jewelry that serves several important functions; I really like that it is water-resistant, and I don’t have to worry about whether I remember to take it off before washing my hands or jumping in the shower. Best of all, and perhaps unsurprisingly, the Bellabeat Leaf Urban is the only fitness tracker I’ve ever worn that has caused people to complement my “cool wrap bracelet”. I’m good with that. 🙂

The Bellabeat Leaf Urban retails for $139.99, and it is available directly from the manufacturer.

What I Like: Attractive design that can be worn in several ways; Tracks steps, sleep, exercise, meditation, stress, and your monthly cycle; water-resistant — can be worn in the shower or when washing dishes; Built in meditations — no need to buy a separate app; Works with Apple Health

What Needs Improvement: I just need to find a way to bend that loose edge back down, but otherwise I have no complaints