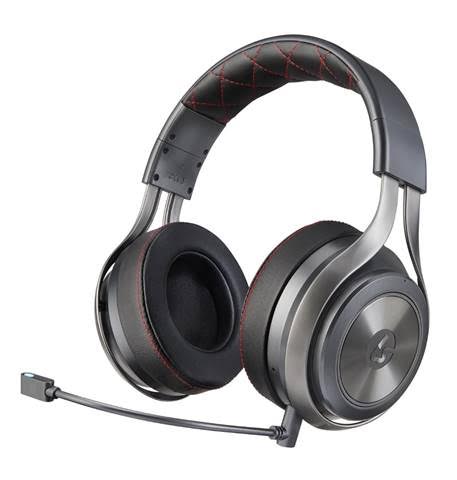 Powered by state-of-the-art DTS Headphone are the LS40, the first headset to not only feature surround sound audio to the LucidSound brand, but to promise to fully immerse the user into the game they are currently playing. We’ve tested many gaming headsets here at GearDiary, and the LS40 is one that we’ve been looking forward to trying out since they were announced back in 2016 at the E3 Electronic Expo. With 50mm Neodymium drivers, the LS40 Wireless Surround Universal Gaming Headset are an audiophile’s dream, and already a gamer’s wish list in 2017. With 7.1 surround sound, the LS40’s feature two distinct sound modes and three stereo modes to you can hear every bump, footstep, and game-altering noise that you probably wouldn’t hear just listening to it coming directly from your television. All-new smartphone controls provide full support for cell phones as well, so if you receive a phone call during a game, you can easily access and make sure that they don’t disturb you as you’re playing.

“It’s been less than a year since the inception of our first headset and we continue to strive to bring new levels of excitement and innovation to gamers,” said Chris Von Huben, CEO of LucidSound. “Our single biggest request from gamers is for the introduction of a surround sound headset and we’re confident that the highly anticipated LS40 will set a new benchmark for premium gaming audio, proving well worth the wait. Our core belief in uncompromised audio quality and genuine innovation continues to drive our development program and we look forward to continued growth as we head into 2017.”

With compatibility with the PlayStation 4, Xbox One, PlayStation 3, PC/Mac, smartphones, and tablets, you can find out more information about the LS40 Wireless Gaming Headset over atLucidsound.com today.