I have often found myself guilty of being “penny-wise and pound-foolish,” that is, in order to save a buck here and there, I’ve put something much more expensive at risk. An example of this has been the way that I secure my road bike when I park it outdoors either at home or downtown when I’m running an errand.

Now, it’s not like I have a $5000 carbon fiber racing cycle, but it is a really nice (albeit vintage) road bike that I would hate to see disappear. And I lock it with a simple cable and combination lock that could be defeated in five seconds by a thief with a set of garden shears. Bad Chris! Stupid Chris!

That’s why I was excited to share the news with you earlier this year of a new high-tech U-Lock for bicycles that was ready for release from Lattis. And I’m happy to announce that the Ellipse is now ready for shipment and that the producers were kind enough to offer a sample for me to run through its paces. 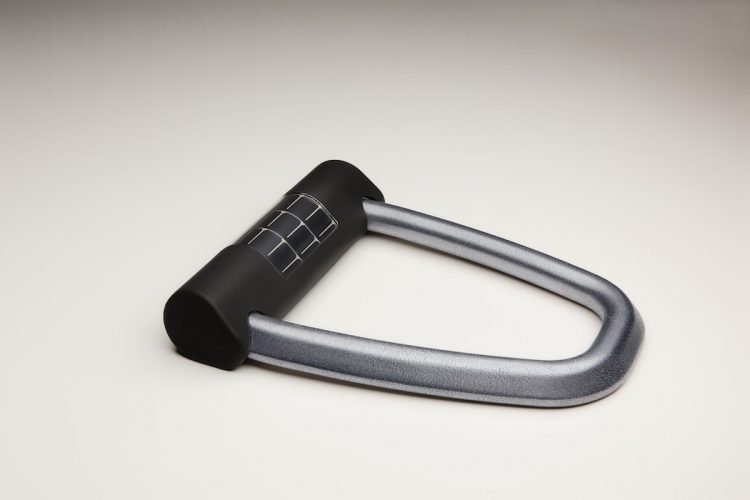 Run a lock through its paces? Doesn’t a lock just do two things? Lock and unlock, that’s about it. Au contraire, mon frère, the Ellipse Bicycle Lock has all sorts of tricks up its sleeve. Let’s take a peek.

First of all, straight out of the box it is apparent that this is an exceptionally well-designed and constructed piece of security equipment. Sleek and sturdy, it really is a minimalist device with only the solar power panels and an almost invisible keypad distracting from the metal and rubberized metal finish. Well, there is a tiny micro-USB port for you to charge the lock’s electronics in case the solar charger doesn’t keep it charged. Of course, that would mean that you didn’t get outside with your bike for more than six months so that you could both get a little sun. That’s on you. You should get out more. Or you can still charge it with indoor light through the solar panel.

The locking mechanism itself actually combines two points of security rather than just one and a pivot point like most U-Locks. This means a potential thief would have to cut through two 17mm steel shackles instead of just one. Move along, Mr. Bicycle Thief…

Setup is fairly simple after you download the app for iOS or Android. After opening the app, you need to set up an account using Facebook or email and then send a verification to your phone to link them up. One neat option is that you can lend the lock to a friend or maybe someone renting it from you and provide them with a temporary code to unlock the Ellipse.

Once you set up a code for the touchpad using a combination of four directional arrows, there are three ways to lock/unlock the Ellipse Bicycle Lock. Directly from the app, all you have to do is tap the virtual button on the main screen. Or you can use the capacitive buttons on the keypad directly on the outer edge of the shackle. One small quibble is that it’s not immediately intuitively which way is up on the keypad, so if you set the combination starting with the up arrow, you might be entering the code backward until you figure it out. It could take up to an hour if you’re me. Or you could notice that when you hit the center button, the up arrow blinks red. Be smarter than me. 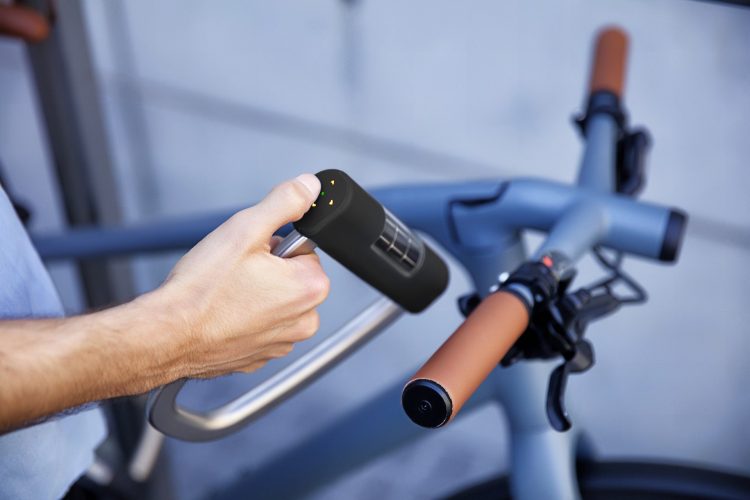 The third way to open the lock is by setting it up for proximity-triggered keyless entry. Smartly, the default is for this option to be disabled for security reasons so that your bike doesn’t automatically unlock before you can get to it and secure it.

The connectivity between the Ellipse Bicycle Lock and your phone also allows for some important safety options. From a security standpoint, you can set the Ellipse to alert your phone if it detects that someone is trying to tamper with the lock. It uses a triaxial accelerometer to detect the impact or prying, so it might text you if you were to just throw it in the back of a trunk without unlocking it. That’s an easy fix. It will not, however, track your bike if it is stolen. There are other devices that do that, and Lattis chose to focus on near-field data using the accelerometer instead of long distance GPS tracking.

From a safety standpoint, the Ellipse can also use that accelerometer to detect if you’ve been in a crash. In order to confirm that there has been an incident, both your phone and the lock have to detect an impact at the same time, so if you’re carrying them both together in your backpack and happen to drop it, you may get a false alarm. If that does happen, be sure to get in touch with whoever your emergency contact is, since that’s who the Ellipse will send an automatic text notification to. While that might give someone a scare, the fact that someone is alerted in the event of a real incident more than outweighs that minor concern.

From a security perspective, the Ellipse Bicycle Lock promises to be a hearty competitor to other U-Locks. They claim that it can survive freeze attacks, prying force up to 10,000 lbs tensile load and even most conventional cutting attacks. The lock cannot be picked, and hacking it would be extremely difficult thanks to 256-bit elliptic curve cryptography combined with RSA public key infrastructure to secure the lock.

Now, this security comes at a slight cost in that it’s a heavy chunk of metal. Weighing in at about 2 ½ lbs., you’ll need a backpack or panniers to carry it while you travel, or perhaps you could drape it across your handlebars while pedaling. Just don’t bang your knee on it. If you’re one of those cyclists who likes to shave grams by replacing all your metal parts with carbon fiber, the Ellipse is probably going to feel like carrying a bowling ball along on your morning training ride. However, compared to other competitive locks, the Ellipse is right in line with most of them and far lighter than the most rugged options from, say, Kryptonite. 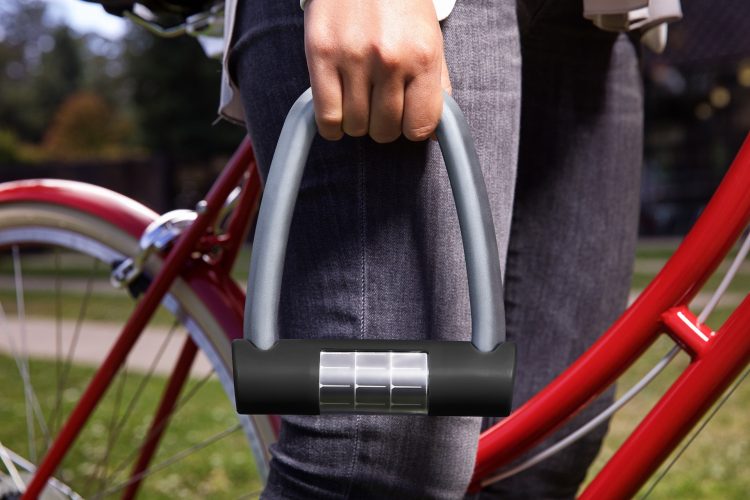 It would be nice if Ellipse provided a rack or clamp to hold your lock while riding, but again, that would add more weight. They do have a carrying clamp in beta and are willing to share plans to purchasers who might want to create their own version on a 3D printer. I feel like that’s a perfect example of how tech savvy and cutting edge Lattis is in this space. I’ll just throw it in my backpack. 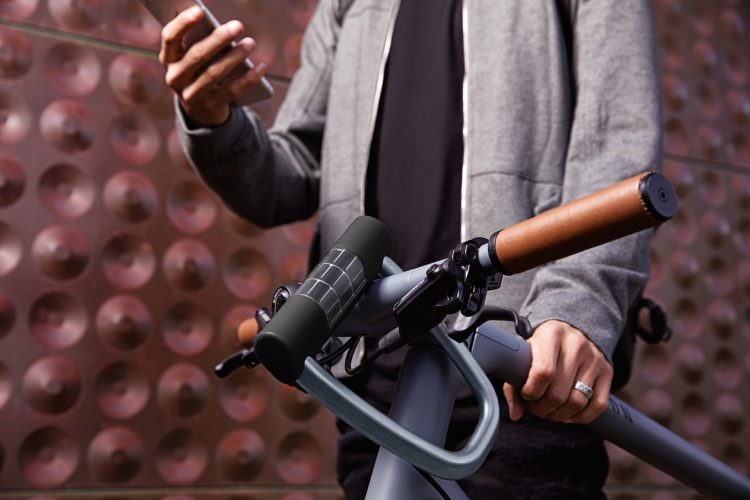 For the combination of security and ease-of-use, I think that the Ellipse Bicycle Lock is a fine option, even at a slightly high price of $199. But again, why be penny-wise and come back to discover your bike is missing? I prefer to be pound-wise, too.

The Lattis Ellipse Bicycle Lock sells for $199 for one or $179 for two or more, and may be purchased at the Lattis website.

What I Like: Crash and theft alerts; Double shackle security; Ease of setup and use

What Needs Improvement: A little bit heavy considering there is no mounting bracket; Capacitive buttons take a little while to figure out (unless you’ve already read this)