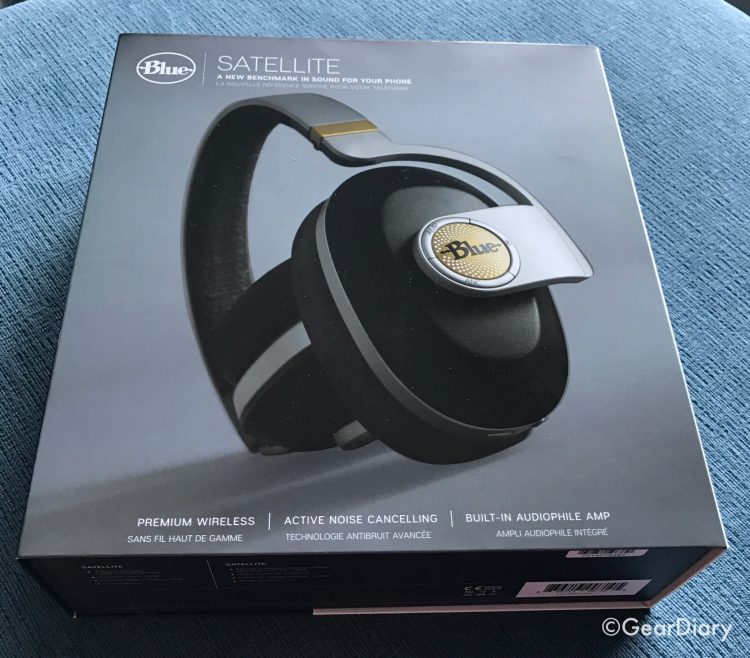 I’m a fan of Blue’s microphones and loved using and reviewing their first offering in the headphones space, the Blue Mo-Fi. The Mo-Fi were big; they were heavy, and they had a design that was unique. This was all the result of Blue stepping back and trying to rethink headphone design from the ground up. The result was a pair of headphones with a headband that was as comfortable as it was unusual. Judie did a great job explaining the unusual design, so I’ll let her explain:

You might be wondering about all of the hinges on the sides, they are there so that you can adjust the earcups and headband in tandem to get the best, most comfortable fit — one where the weight of the headphones is supported by resting on the top of your head rather than by squeezing your ears. The result is an incredibly comfortable experience which allows you to wear the headphones for hours on end without ear or head pain.

So while the design of the headphones is unusual and looks like overkill, there was a reason for the design. In fact, it lets a pair of heavy over-the-ear headphones be comfortable for hours of listening sessions.

Blue went a step further when designing the Mo-Fi and built a headphone amp right into the headphones themselves. Together, the combination of the headband design and the onboard Amp made the Mo-Fi stand out in a crowded market. Despite their bulk and weight, the Mo-Fi were comfortable. And they sounded amazing. And they were $349! (Check out the review here.) We were, and remain, impressed.

Blue was at it again a short time later when they released the Blue Lola. The Lola employed the same design language as the Mo-Fi but left out the amp, cut down a bit on the weight and shed $100 from the price tag. At $249, the Lola still weren’t inexpensive, but they did bring a pair of Blue headphones into a more competitive price range (read Judie’s review here). 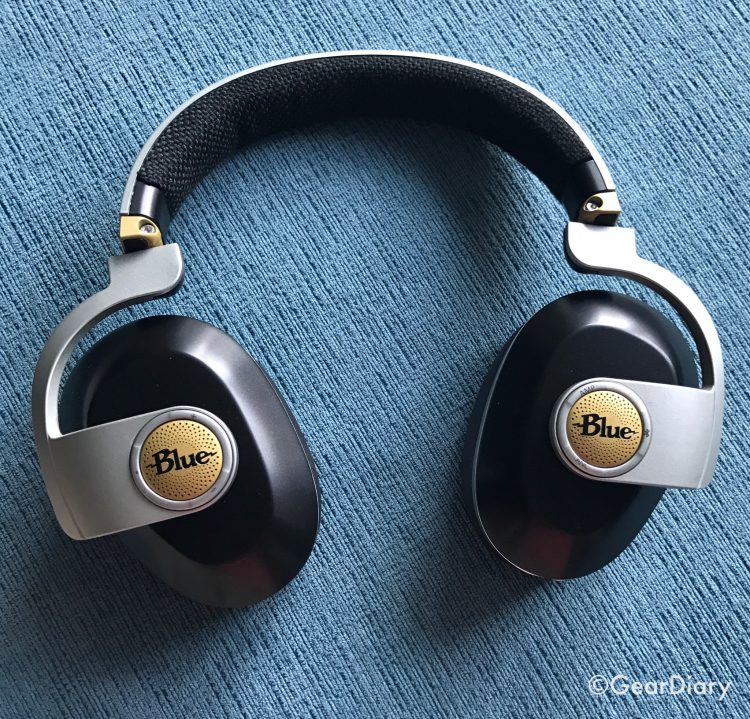 Now Blue has cut the cord by introducing the Blue Satellite Wireless Noise Headphones. Unlike the Lola, Sadie, and Ella, the other headphones in Blue’s portfolio, the Satellite are designed to be used at home and on the go. As they explain:

Satellite is all about bringing no-compromise audiophile sound to your daily life. Whether listening to streaming audio or digital remasters on your commute and at the office, or enjoying vinyl box sets at home, Satellite delivers iconic Blue studio sound wherever you go. Given Blue’s heritage in recording studios, we know a proper amplifier is key to great sound quality. But until now, if you wanted great sound on the go, you had to buy a headphone amp separately and strap it to your phone. Not anymore. Satellite’s built-in all-analog audiophile amplifier brings out new detail in your music regardless of what device you are using. And it pairs beautifully with our proprietary 44mm drivers to deliver every detail of your music with clarity and punch. Blue are the only headphones in the world that have a built-in audiophile amp—consider it a gift to you and your music.

Because the Satellite are designed to be used out in the world, Blue decided to build active noise cancellation (ANC)  into them. But, as I explained in the news post back in January, Blue did something unusual with the ANC built into the Satellite headphones. As you likely know, most headphones with active noise cancellation deliver a low hum when the music of quiet or off. Blue didn’t want anything getting between you and your music, so they built two drivers into each ear. One deals specifically with the music while the other addresses the ambient sound. The result is close to silent. Not only do the headphones zap a ton of ambient sound but, even when there is no music playing, you barely hear the ANC doing its thing. In fact, I am writing this review with the ANC of the headphones on but no music playing, and I cannot hear a thing from the keyboard of my laptop — despite the fact that I have a heavy touch.

Satellite is the only wireless, noise-cancelling headphone that eliminates unwanted noise without compromising your music. Where traditional noise cancelation removes some of your music, Blue has a patent pending design that keeps your music safe on one pair of drivers while dedicating a separate pair to the ANC. That’s a double dose of Blue design that lets you listen like never before.

Let’s dig into the headphones a bit more deeply. The Satellite come with a nice, protective case. It is rather large since, despite the fact that the headphones fold flat, they are sill fairly big and bulky. The travel case contains a smaller case which holds the two included cables. There is a three-meter audio cable with 3.5mm connectors, and there is a USB charging cable. The charge time is three hours and, with Bluetooth on and ANC off, you can get up to 24 hours of playback. With the ANC on that drops down to 8 hours, but that’s still rather impressive.

The headphones have a more traditional appearance than their cousins the $249.99 Lola, $399.99 Sadie and $699.99 Ella. (The Satellite are priced similarly to the Sadie at $399.99.) I’m glad they do since it makes them a bit easier to carry and won’t draw the amount of attention I got when I was using the Mo-Fi out and about during my review. 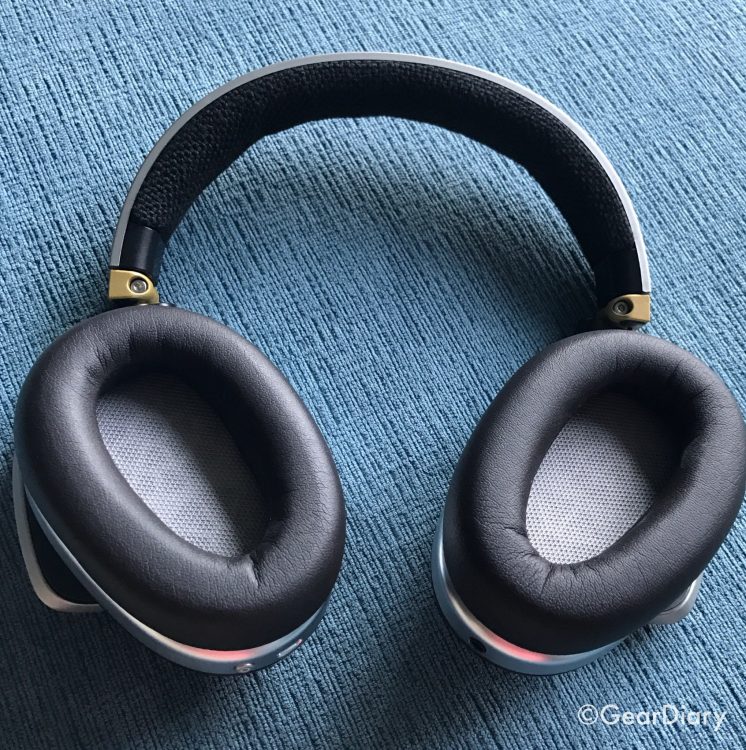 These are substantial over-the-ear headphones, but they are amazingly comfortable. 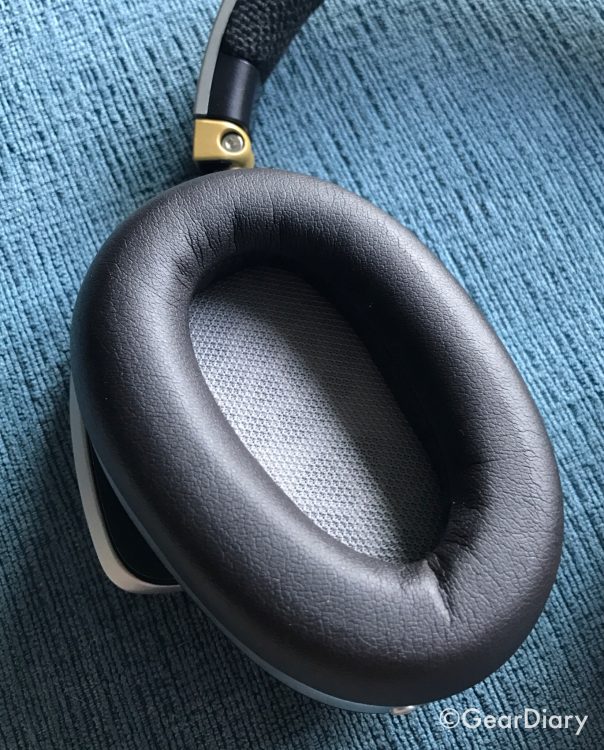 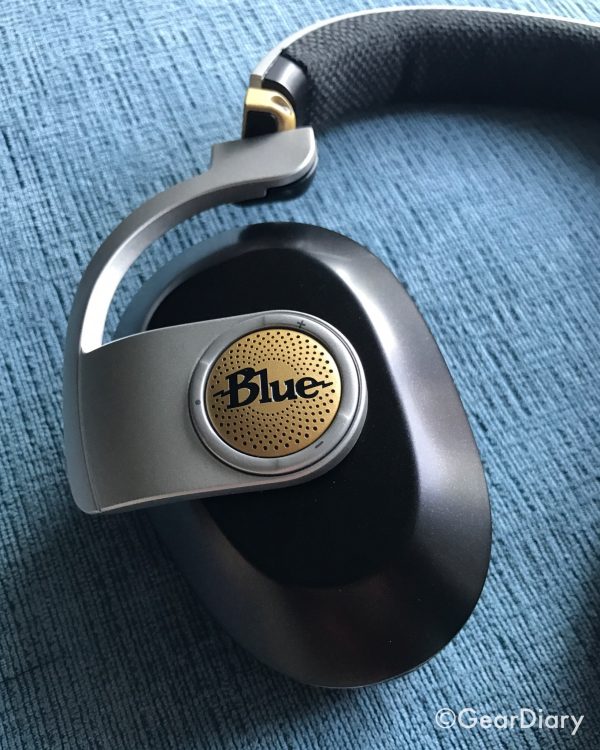 Also adding to the comfort is the fact that the ear cups are attached to the band and frame by one point of contact at the center. This design choice means the ear cups can pivot a bit in any direction. The pivot allows them to naturally shift to an angle that offers the least resistance against your ear and head. This, in turn, means there is less pressure on your ears. The result? I’ve worn these for hours at a time and felt zero (ZERO!) ear fatigue.

The metal and plastic design looks a bit industrial without seeming as if it is trying too hard. 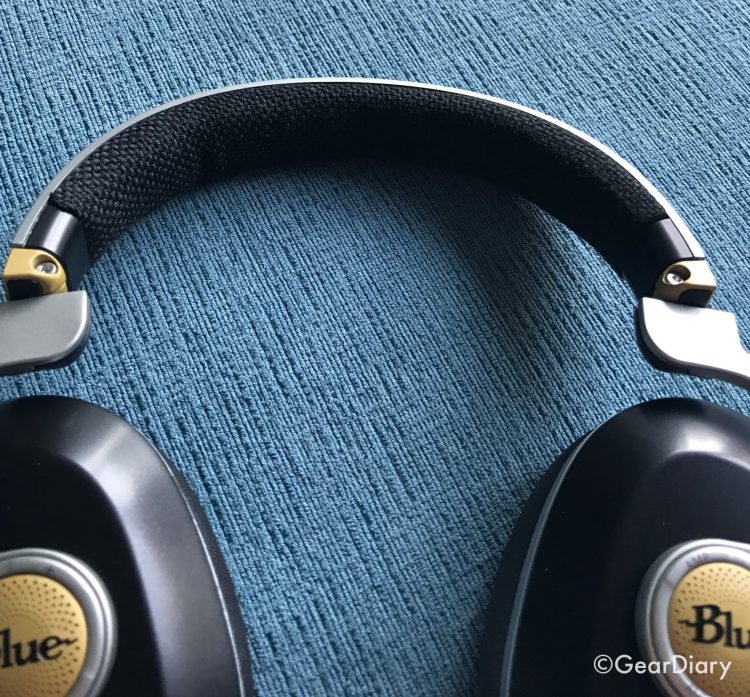 The top of the headband is a smooth silver material. The bottom, where the headphones rest on your head, is a soft, cushy material wrapped in a soft, breathable cloth. 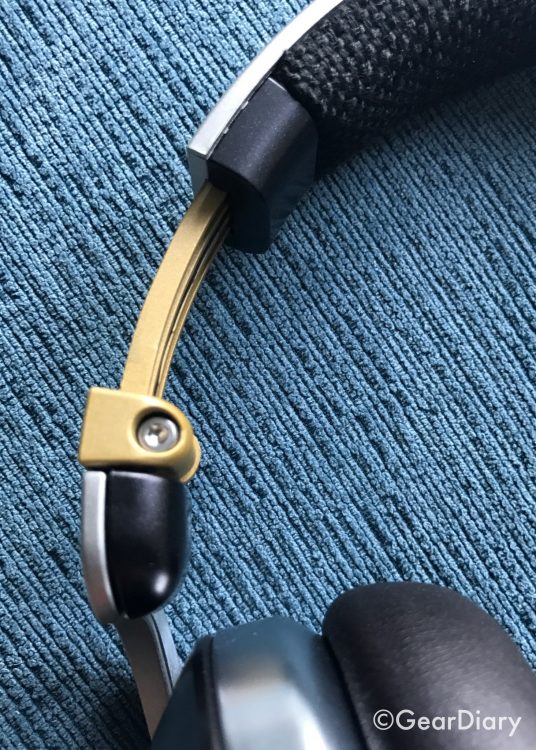 The sliding adjustments for the earphones are made of metal. The same goes for the arm that connects the ear cups to the headband.

In all, the Satellite have a solid build that looks up to the job of keeping the music going for a long, long time.

One of the things that have become a big deal for me when I’m reviewing wireless headphones are the controls. After all, with wireless headphones, you want to control tracks, volume, etc. all from the headphones rather than the device supplying the audio. When headphones also offer noise cancellation, it adds another control or two into the mix. That makes the layout of the controls rather important. When, for example, buttons and controls are not laid out in an easy-to-use, intuitive manner, it can become a huge, frustrating process. Seriously, who wants to take off headphones every time you need to change a track, setting, or volume? The good is that Blue did a fantastic job designing the headphones and made controlling them intuitive.

The controls are found in the logo medallion on each ear cup. 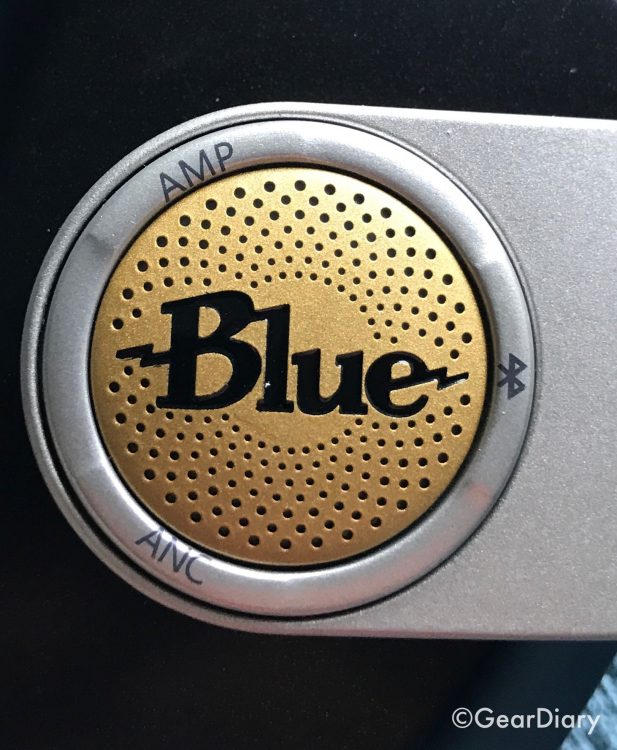 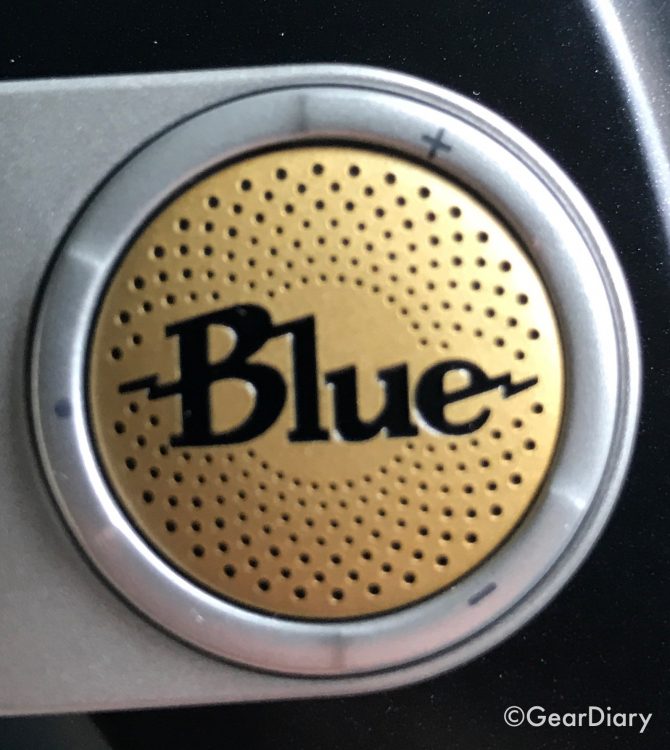 The right ear had the Volume Up/Down, Play/Pause and the Voice Microphone. The port for the audio cable is at the bottom of this ear.

Placing the controls on the logo medallions is brilliant as it offers a tactile way to locate the controls and activate them. I am not, of course, surprised since these headphones come from Blue. 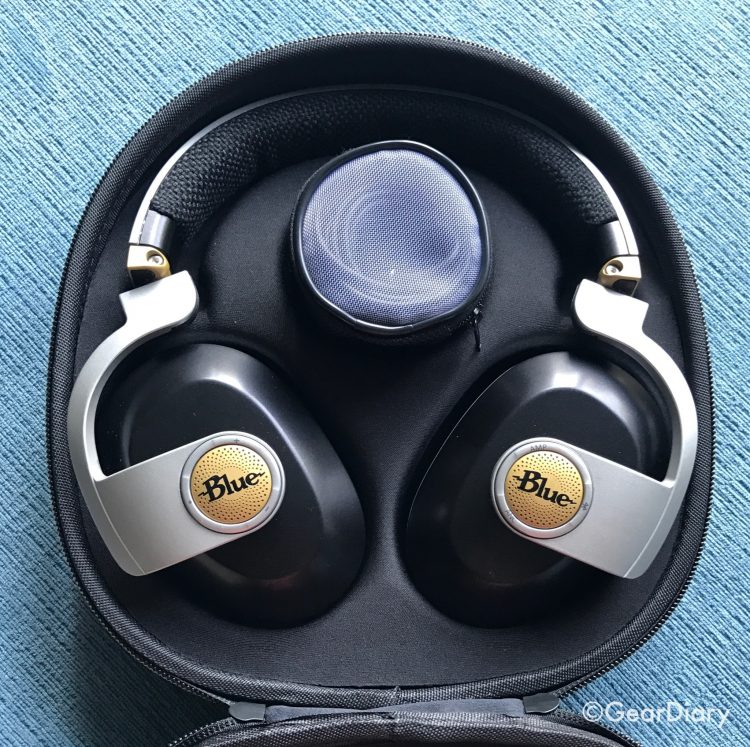 These headphones are solid; the case they ship with is, too.  They carry a premium price tag, and their build reflects that.

The band is strong but has enough flex to be comfortable. The headphones pivot so they can lay flat and the hardware that allows for the movement is tank-like. The metal adjustment that allows the ear cups to move closer to or further from the headband is solid as well.

The result is that they are lighter than one might expect but built to take a lot of use. That’s important since these are the first headphones from Blue that were designed to be taken and used on the go.

Finally, let’s talk about the sound. When Judie and I reviewed the Mo-Fi headphones, we described the sound as “Amazing.” We both have the opportunity to review numerous pair of headphones each year, so both of us concluding that headphones sound amazing is a huge endorsement. I will, therefore, use the same adjective here. The Satellite headphones sound amazing. I tend to use them with both the Amp and the ANC on. For me, the ANC means the headphones don’t have to compete with other sounds, and the Amp just puts a bit more “meat on the bones” regardless of the type of music to which I am listening. Don’t get me wrong, the headphones sound great with both the Amp and the ANC off, but my preference is to keep both on even tough it means less battery life per charge. 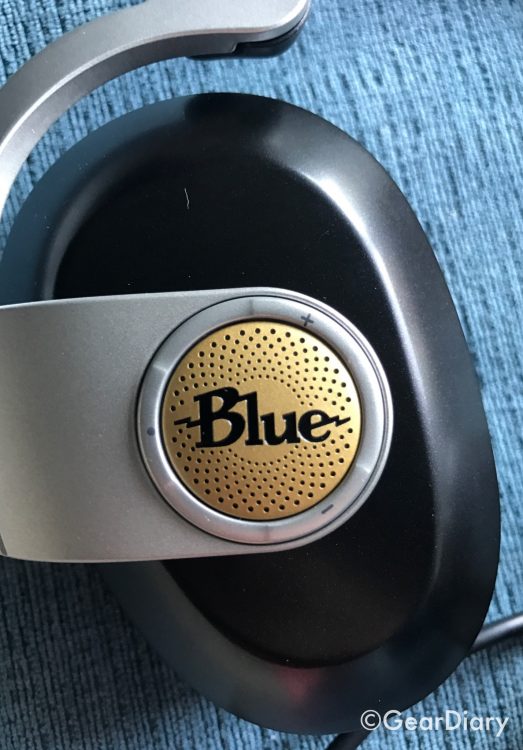 Blue describes the Satellite Premium Wireless, Noise-Cancelling Headphones as “The new benchmark for wireless listening.” With them. You can, “Hear More of Your Music, Less of Everything Else.” The latter statement is true. By employing two drivers in each ear and allowing one driver to address the noise cancellation and the other provide the music, they have done something special here. The ANC doesn’t make its presence known through an audible hiss or anything else. It just silently, and seamlessly, shuts down the outside world. That lets the second driver supply the music and, in this case, it does so brilliantly. In that regard, I think I also have to give Blue their first statement. These headphones are a new benchmark in wireless listening. I love these headphones and have been using them daily since the review sample arrived. Yes, they carry a high price tag, but for the money, you will surely be impressed. Check them out here.