I recently “renovated” my home office. It now has a new 13” MacBook Pro, an UPLIFT standing desk from HumanSolution, a big beautiful monitor from AOC and AudioEngine HD3 Bookshelf speakers. Key to this setup, however, is the Belkin Thunderbolt 3 Express Dock HD with Cable. At $349.99 it is pricey, but it turns my laptop into an amazing desktop. 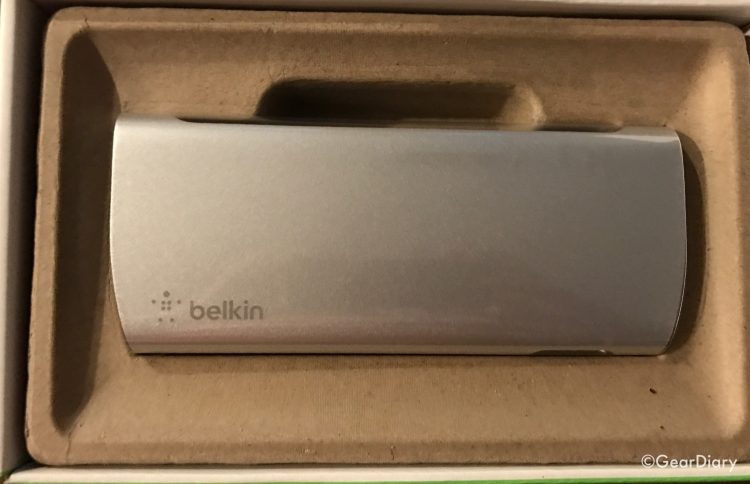 The Thunderbolt 3 Express Dock is an update to a Belkin dock I reviewed some time ago. This time around, however, the ExpressDock is designed to work with current MacBooks and the increasing ubiquity of Thunderbolt 3 AKA USB-C. The dock is small but solid. It is 8.17” wide, 3.4” deep and 1.2” high. 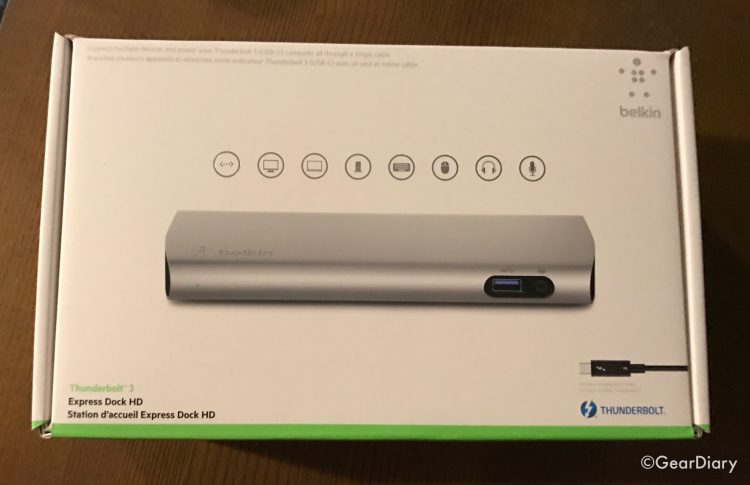 The ExpressDock arrived in simple packaging. There was no fancy unboxing to do, but instead the packaging yelled out, “Let’s get down to business.” 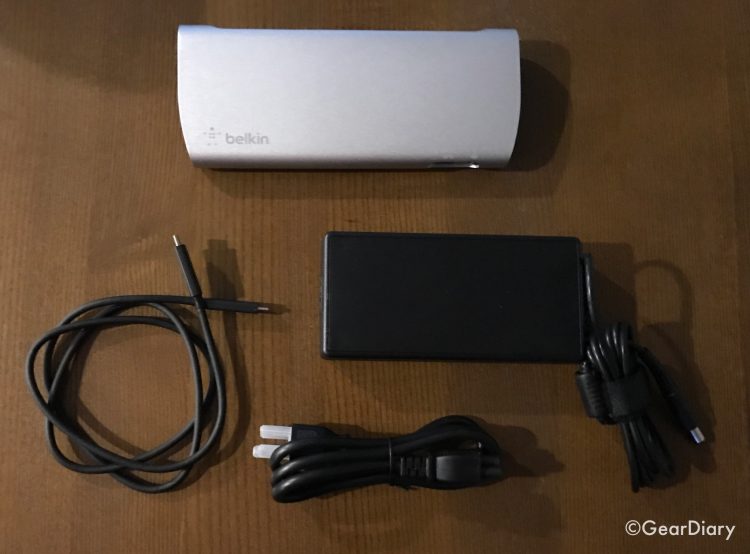 The fact that the ExpressDock has its own power source and offers a whopping 170W of power is key for a few reasons. Because Apple switched to USB-C for the current MacBook Pro line, none of my current power adapters work. That meant I was about to go out and purchase an extra power adapter so I could have one power adapter at home and one in my gear bag. The fact that the Belkin ExpressDock is able to power my MacBook means that I don’t need to purchase the extra power adapter and can keep the one that came with the laptop in my gear bag. When I’m home, I simply plug a single USB-C cable into the laptop and the ExpressDock does the rest. It powers my MacBook, connects it to monitors, connects it to my speakers and more. 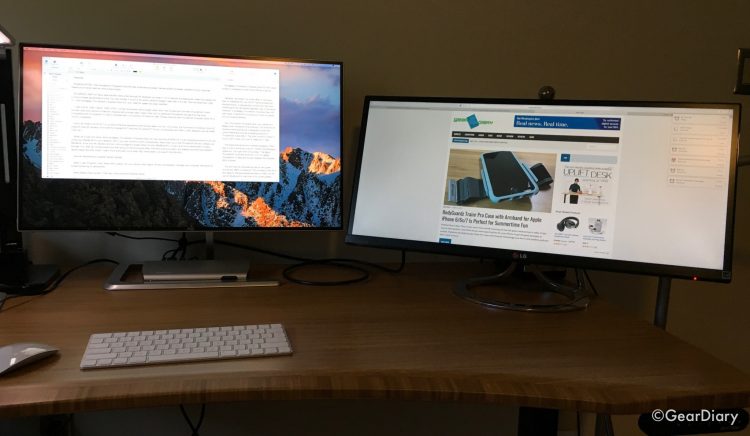 Speaking of monitors, I currently have the laptop driving a 32” AOC monitor AND a widescreen 30” LG monitor that I was sent by Paul Strauss AKA The Awesomer. (Check out Paul’s site here.) The 85W of power from the ExpressDock is plenty to power the laptop AND drive both monitors.

Okay, I’ve gotten ahead of myself and dove right into how I’m using the Belkin Thunderbolt 3 ExpressDock without taking the time to talk about the ExpressDock itself. Apologies, but I’m just really thrilled with what this accessory does! 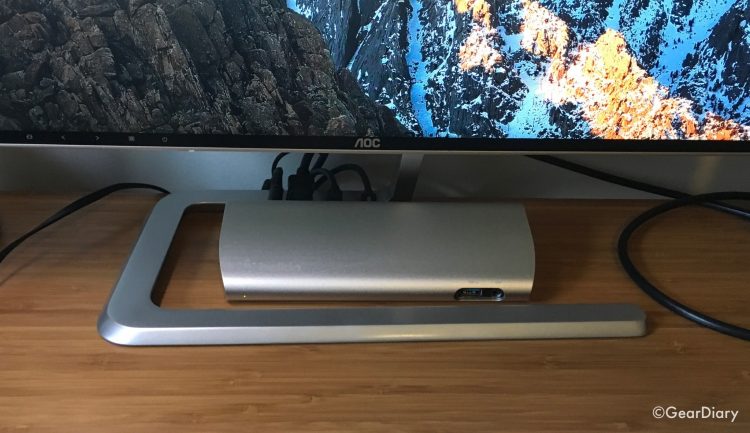 The Dock is key because it lets you connect eight different devices using a single Thunderbolt cable. (A cable that ships with the ExpressDock mind you.)

Among the items, you can connect are two 4K monitors but connecting one to the Display Port and a second via the second Thunderbolt 3 (USB-C) port. (The first USB-C port is used to connect the ExpressDock to the laptop.) The included power adapter supplies 170W of power with 85W going to power the computer through the included Thunderbolt 3 cable and the rest going to whichever peripherals you connect. Finally, you can even daisy chain up to 5 Thunderbolt devices from the dock. In other words, you can connect a boatload of items to the dock and then have all of them connected to your computer with a single cable that will also power your computer and, if you are using a laptop, keep it charged.

The design of the Belkin ThunderBolt 3 Express Dock is clean and matches the aesthetics of Apple’s products. 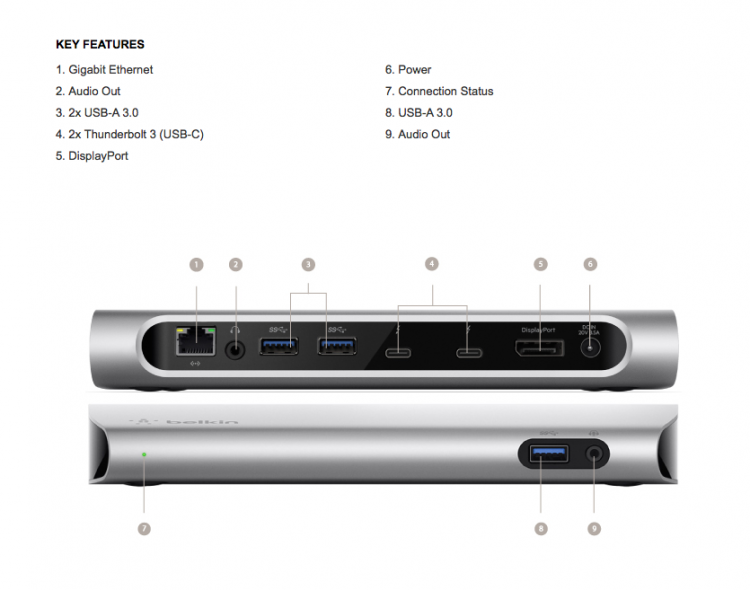 On the back are a Gigabit Ethernet port, a 3.5mm audio out port, two USB-A 3.0 ports, two Thunderbolt 3 USB-C ports, a Display port, and the port into which the power adapter goes. All of these connections are on the back and allow you to make all the connections you need while keeping the cables organized and out of sight.

Belkin understood, however, that you may want to make some connections without having to reach around and fumble with the back of the dock. Therefore they put a USB-A 3.0 port and an audio out port for your headphones. There’s also a power indicator light so you will always know there is power going to the dock.

And there is more. Because the ExpressDock was designed for use with USB-C devices Belkin made sure the ExpressDock could handle FAST. And it can. Transfer rates of up to 40Gbps mean you’ll be flying through transfers that used to take forever. How fast is 40 Gbps? 40 Gbps is twice the speed of Thunderbolt 2’s 20 Gbps and 8x faster than USB 3.0’s 5 Gbps. In the real world, Belkin notes that at these speeds you can transfer a 4K movie in under 30 seconds. THAT is fast. All said, as Belkin notes, “Thunderbolt 3 merges performance and simplicity making the Thunderbolt 3 Express Dock HD the true all-in-one docking solution.”

When all is said and done, while the Belkin Thunderbolt 3 Express Dock HD may be pricey at $349.99, but it is an amazing accessory if you are using your MacBook Pro as a desktop. With it you can connect a host of peripherals, daisy-chain up to five Thunderbolt devices, charge your MacBook, drive dual 4K displays and do it all by plugging a single cable into your MacBook Pro. I love it and cannot recommend it highly enough. It is, after all, far less expensive than going out and buying an iMac. And why would you when you already have the most powerful laptop Apple has ever made? Learn more and order yours here.

What I Like: Powerful; Fast; Ships with a cable; Lets you have a clean setup; Drives dual displays; Charges your computer with plenty of power remaining for peripherals

What Needs Improvement: The may initially be a bit of sticker shock