The North American International Auto Show in Detroit has not even officially opened its doors yet, and already there are debuts and big news coming from the Motor City. Chevrolet and Ford have held pre-event events and trucks are the big news. 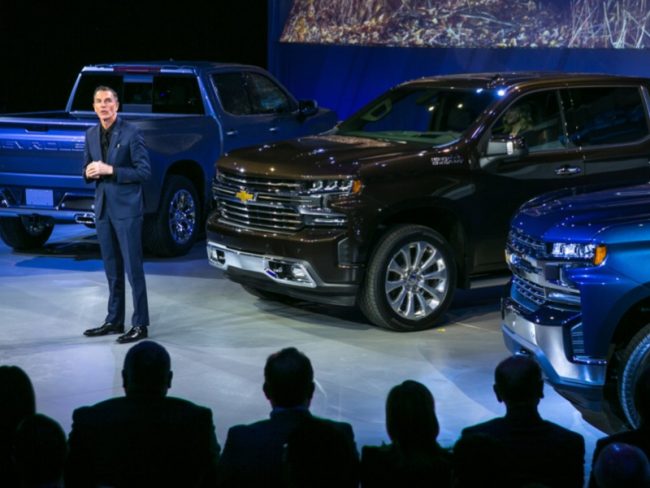 Chevrolet
Let’s begin with Chevy and its 2019 Silverado that was officially debuted this weekend. I say officially, as the automaker gave attendees at the Chevy 100 truck event last month a little preview as a new Silverado arrived by helicopter. The debut event this weekend had the automaker still extolling the value of steel as the main component of its trucks where others (Ford) has been using some aluminum to offset weight and thereby increase fuel efficiency.

“With the all-new Silverado, we’ve taken the best truck on the road and made it even better,” said Mark Reuss, General Motors executive vice president of Global Product Development, Purchasing and Supply Chain. “It has a longer wheelbase, more passenger and cargo volume, and yet, thanks to our mixed materials strategy and mass reduction expertise, the new truck is 450 pounds lighter than the current model.” 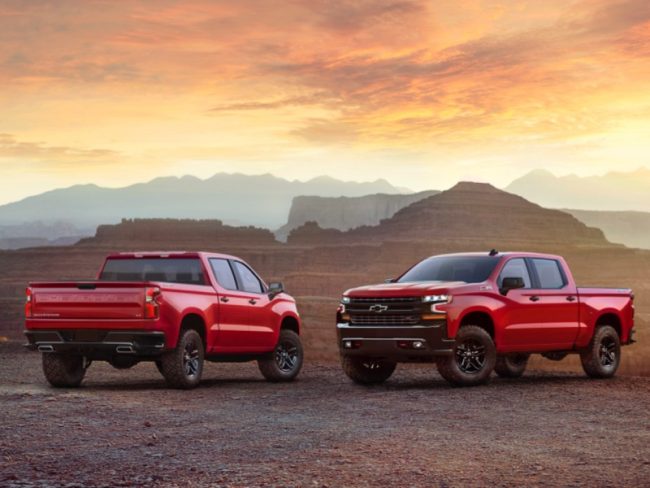 The new wheelbase is up to 3.9 inches longer with overall length up 1.6 inches. This allows more cargo capacity according to Chevrolet. And the automaker has not avoided aluminum in construction of the new Silverado as that material is being utilized for doors, hood, and tailgate components. Some 450 pounds have been shed from the Silverado for 2019. There are also mixed materials in the new independent front/live axle rear suspension systems. Six new engine/transmission combinations will propel the 2019 Silverado including a new Duramax 3.0-liter inline-six turbo diesel, but Chevrolet did not provide any further information on this. They also bragged about a new industry-first Dynamic Fuel Management system that will actively shut off any number of cylinders depending on immediate needs in order to optimize fuel economy. 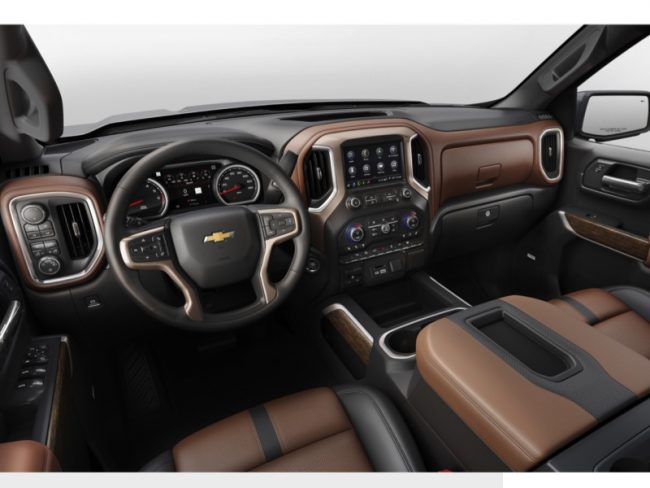 Silverado will arrive in eight trim levels broken down into three categories of high value, high volume, and high feature. And then there is chrome. “Chrome has become more polarizing, and more personal, than any other aspect of truck design,” said Rich Scheer, director, Exterior Design, Chevrolet Trucks. “Some customers want no chrome at all and only body-color or blacked-out trim. Others feel a truck isn’t a truck without a chrome bumper, but feel extra chrome can be too ‘flashy.’ Others want as much chrome as they can get.”

The new 2019 Chevy Silverado will arrive this fall with no word of pricing or fuel economy yet. 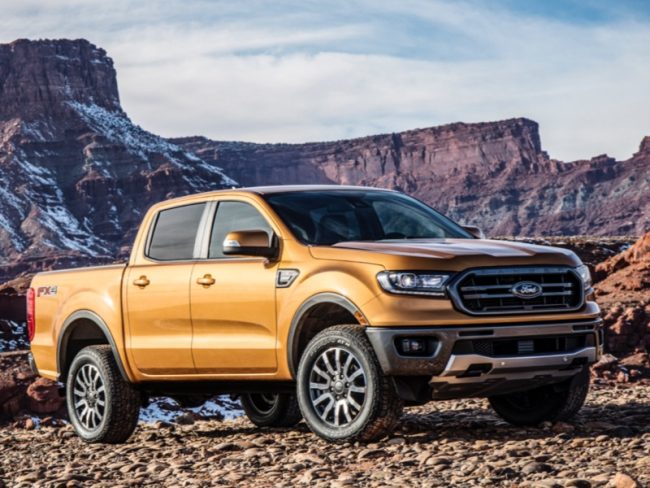 Ford
Better late than never, I suppose. Ford is finally bringing the new Ranger midsize pickup to America. It never really left in other markets across the globe, and Ford actually built a better Ranger not long after erasing it from the U.S. market. Trips to Ford facilities in Dearborn saw the new Ranger here and there on property but never in a showroom – until now.

According to Ford, the new Ranger answers the call of the growing midsize truck market as U.S. sales have risen 83 percent since 2014 in that segment. Ranger will return later this year being built at Ford’s Michigan Assembly Plant. It features a fully boxed high-strength steel frame with front and rear frame-mounted steel bumpers and will ride on double-wishbone front and parabolic leaf spring rear suspension. Ford claims it has been designed, engineered, and tested to F-150 standards so I guess that means it too will have an aluminum cargo box. 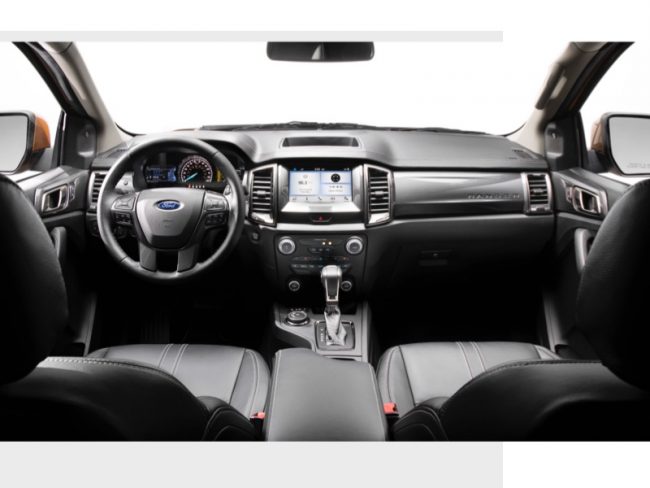 Ranger will arrive in SuperCab and SuperCrew cab configurations powered by a 2.3-liter I-4 EcoBoost engine mated to a 10-speed automatic transmission and it will offer a terrain management system along with Trail Control. Ford likens Trail Control to cruise control on the highway but designed for low-speed, rugged terrain. The new truck will be available in XL, XLT, and Lariat trim levels with available Chrome, Sport, and FX specialty packages. Ford says Ranger will arrive with all of its latest driver safety and infotainment technologies. 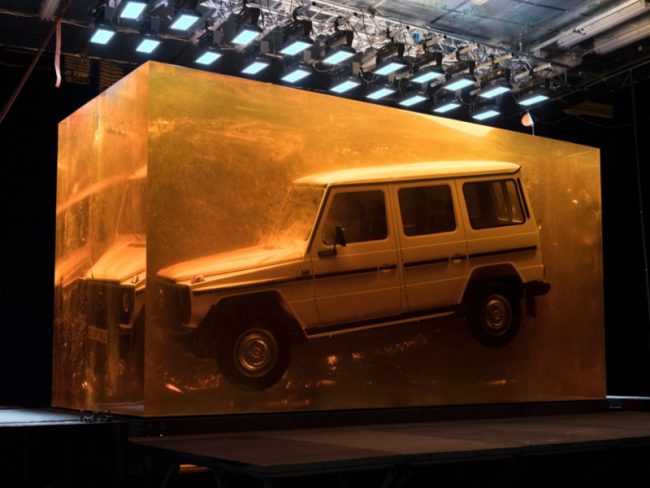 Mercedes-Benz
While not officially debuting the new G-Class offroad capable luxury SUV just yet, Mercedes-Benz has created some buzz with previews of the new vehicle enjoying time in the great outdoors and there is a fullsize first-edition 280 GE from 1979 cast in a resin tomb at the North American International Auto Show, akin to something seen in the movie Jurassic Park, only much larger – like 44.4 tons larger. Apparently engineers have extracted DNA from this early model to create the all-new G-Class that will debut in Detroit later today. 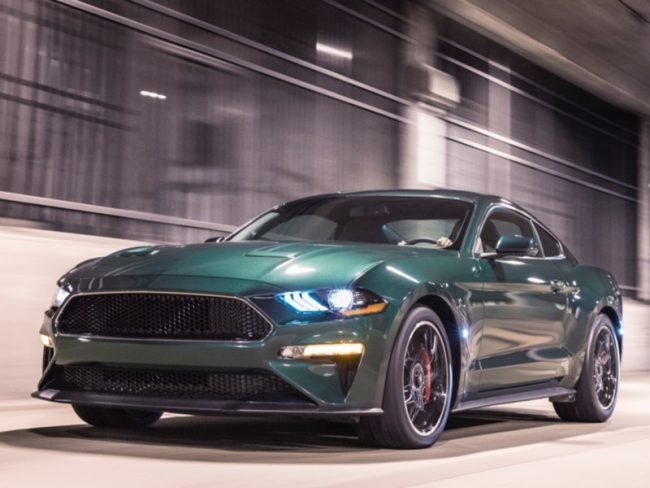 Ford Update: Bullitt 5oth Anniversary
Following the rollout of the new Ford Ranger to members of the media, Ford hit the stage with a new, limited-edition Mustang Bullitt that was escorted by the original 1968 Bullitt driven by Steve McQueen. The new Bullitt was driven onstage by McQueen’s own granddaughter, Molly McQueen. The new model will available as a special-edition this summer. It will feature a 5.0-liter V-8 engine packing 475hp and 420 lb. ft. of torque. It will have a top speed of 163 mph and of course include a white, cueball shift knob for the manual gearbox. It will feature unique Recaro sport buckets and be available in Shadow Black and classic Dark Highland Green.

“This new Bullitt is, as Steve McQueen was, effortlessly cool,” said Darrell Behmer, Mustang chief
designer. “As a designer, it’s my favorite Mustang – devoid of stripes, spoilers, and badges. It doesn’t
need to scream about anything – it’s just cool.” 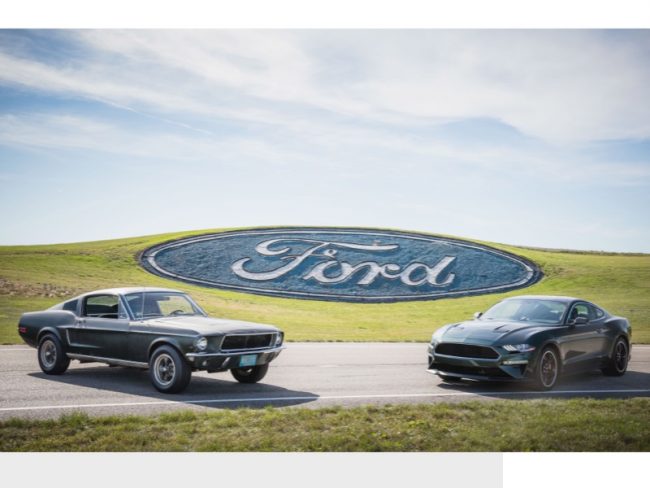