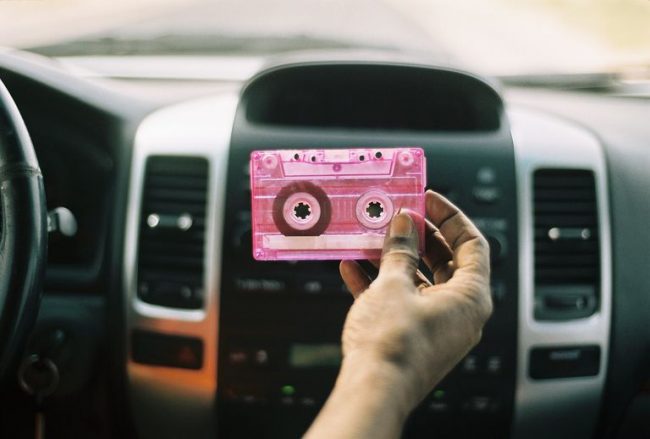 I play in a band, which means that my daily driver is an old, huge van.

Old, huge vans aren’t known for their stellar sound systems, and mine is no different. It has an AM/FM radio, a tape deck, and if I’m feeling fancy a CD player.

And that presents a little bit of a problem because I need my music when I drive. My wife often makes fun of me for choosing music for a five-minute drive. So I don’t really do well with limited listening choices in my daily driver.

For a while, my go-to solution has been a huge CD wallet filled with burned CDs. And let’s be real: in the age of blockchain technology, nobody burns CDs anymore. We all listen to music on our phones. But I didn’t have an easy way to connect my phone to my stereo. I tried to do the tape adapter thing, but the interference from my smartphone made it completely unlistenable. And ever since Apple removed the headphone jack, it’s been even harder. I can’t connect to the tape adapter without another separate adapter. And then, I can’t listen to music and charge my phone at the same time.

But after a while, I got tired of burning CDs in anticipation that I might be in the mood to listen to it while driving, and I got even more tired of listening through my phone speakers when I had that one particular song stuck in my head. Not to mention that it doesn’t give me the opportunity to listen to any new music through Spotify. And don’t get me started on skips.

I needed to find something a little more effective. I thought about cracking open the back of the stereo to hack an auxiliary cord directly into the stereo. But that wouldn’t work around my lack of a headphone jack.

Then it struck me: Bluetooth.

If I could find a way to get a Bluetooth signal into my stereo, then I could get all of the music on my phone into my car stereo, without needing to fuss with any wires or adapters.

I hopped on Amazon to see what I could find. A few results down, I came upon a cheap Bluetooth receiver. The average 3-star reviews didn’t inspire much confidence, but for $6.99 I was okay with a small gamble.

Most of the negative reviews focused on the poor battery life. At peak performance, it boasts an unimpressive two-hour lifespan, and according to the reviews, that timeline quickly went downhill. But, I already have a USB jack in my car, so keeping it plugged in wasn’t an issue.

Once I got it in the mail, I went for a drive to test it out.

The device paired quickly and easily to my phone, and the sound quality was surprisingly high. And as I drove around and streamed from Spotify, I was very pleased to find that the nasty electromagnetic noise wasn’t transmitted through the Bluetooth receiver. The receiver was even small enough that I could fit it in the tape deck to keep it out of the way.

I just have to route the wires around a little bit to keep them out of the way, but after that, I’ve managed to turn my crappy van sound system into a functional Bluetooth stereo for under ten bucks. Not a bad upgrade.