For the past few weeks now, I have been using and growing accustomed to a new keyboard, the Logitech G513. Boasting a full keyboard layout, multiple profiles, full RGB backlighting, and a detached wrist rest this keyboard is hands down the most comfortable keyboard I’ve ever owned, but it is not without its drawbacks and quirks. 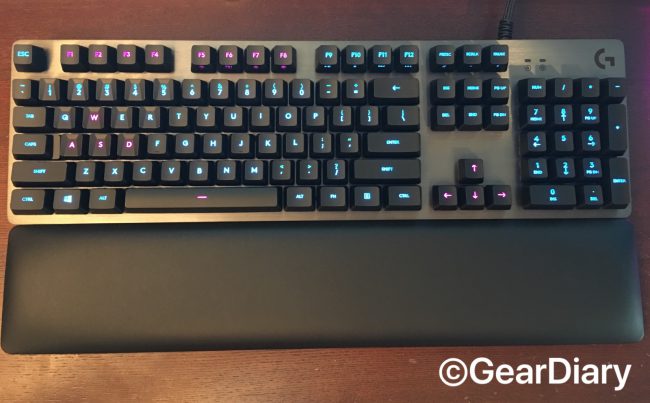 For a full keyboard layout, including the number pad, the G513 does not take up much desk space at all. The key spacing is tight and a lack of an upper and lower bezel means that while it does include a wrist rest, more on that later, it lacks dedicated media keys. While I love the size, missing dedicated media control keys is a major pet peeve of mine. Despite being a full keyboard, Logitech opted to include a large logo in the upper right rather than media controls.  This was a missed opportunity to bind them as alternative functions to the later function keys and screen control keys.

This keyboard utilizes Logitech’s Romer-G switches, Logitech’s answer to the more common Cherry MX Red, Brown, and Blue switches found in competing keyboards. All three variants of the Romer-G switches, Tactile, Linear and GX Blue, all feature a 1.5mm travel distance. Compared to most keyboard this means that for those with light strokes should feel a much quicker response time while typing. Speaking of typing, this keyboard is a delight to type on. A unique attachment four prong system for the keycaps eliminates light leakage and stabilizes the keys, while also eliminating all key wobbling. Every key has little to no horizontal movement. This unique method of keycap attachment does mean that those who like to swap out keycaps for something with a bit more style will be out of luck, Logitech currently only offers the keycaps in black. Logitech does, however, include alternative keycaps for the standard gaming profile keys, 1-5 and Q, W, E, R, A, S, and D. These alternate keycaps feature inward slanting sides and a deeper recess than the normal keycaps. I couldn’t find a noticeable difference in gaming while using these keycaps, but I did find that I enjoyed using them while typing as a secondary tactile marker for hand placement. 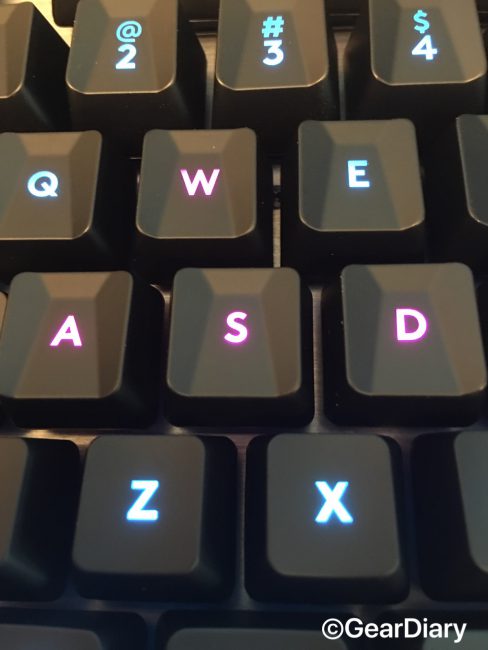 To keep the frame of the keyboard tight, Logitech chose to exclude the dedicated media keys and a wrist rest. They did, however, provide a separate wrist rest. The memory foam wrist rest is my favorite aspect of this keyboard. Since the wrist rest is fully detached from the keyboard, this means that not only can you adjust it to whatever angle you want, you can rotate it, slide it down. Unlike an attached or built-in wrist rest, this wrist rest offers the widest range of possibilities allowing the user to set it exactly as they wish.

Bonus features that come with the Logitech G513 keyboard are a USB pass-through slot, due to the keyboard requiring two USB slots on your device, fully customizable RGB lighting and programmable keys, accessible through Logitech’s G-Hub software, and a key puller for easy keycap removal, and undercarriage cable runners that allow one to run headphones or other cables under the keyboard to eliminate clutter. On the back of the device, there is also appears to be a cross between a screw mount and threaded optical cable, for what appears to be the option for attachments or what was planned to be attachment options. Logitech has announced nothing regarding this, nor did they mention its purpose. This plug is on the backside of the keyboard was flush and didn’t impact the experience, however, it is a strange production choice to provide it for no obvious function. 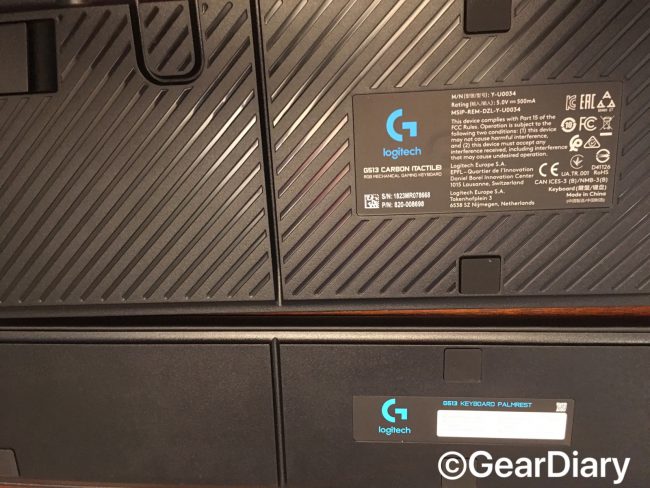 At the end of the day, this keyboard has been a dream to use. Highly customizable and extremely comfortable to use for long durations. It’s $149.99 price point is a bit steep for most people, but I managed to get it on sale and have seen it cheaper than what I paid.

The Logitech G513 Keyboard is available directly from the manufacturer for $149.99 as well as from other retailers including Amazon [affiliate link].