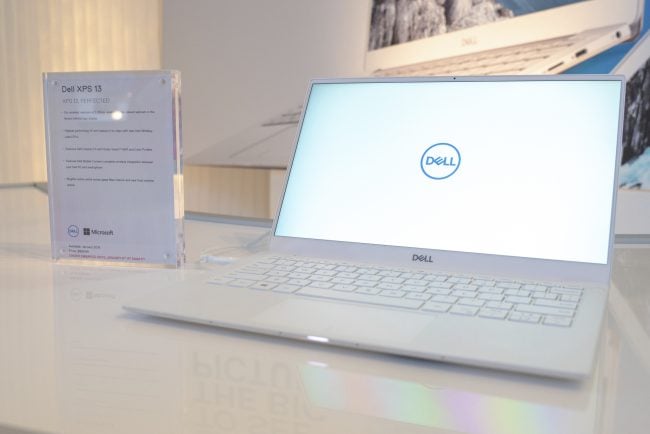 Dell may not always get pulses racing with excitement, but if anything in their lineup is designed to turn heads, it’s the XPS. The new XPS 13 crams so much good stuff into one computer you’re almost going to be excited enough to tell people “Dude, I’m getting a Dell!”

The XPS 13 is a thin and light 13″ laptop with what Dell calls an “InfinityEdge” display, basically a way to reduce the bezels significantly along the top and sides. It has nothing to do with Avengers: Infinity War, so no fear that your new computer will in any way influence the fate of the universe. It will, however, have a tiny 2.25mm [.08in for Americans, or, about 12% thicker than a nickel] HD webcam embedded in the top of the InfinityEdge display.

That’s not the only feat of engineering. They’ve also made the computer with recyclable materials, and the silver colorway incorporates Ocean Plastics Packaging. The XPS also has GORE thermal insulation to help it run cooler and more efficiently for up to 21 hours.

Despite all these leaps forwards, the XPS won’t body slam your wallet. It will start at $899 and ships in January 2019. Between the smaller footprint and the recycled materials, it’s almost worse for the environment if you DON’T go buy one!