I loved my original Apple Watch but eventually stopped wearing it. Since buying the Series 4 Apple Watch, I’ve been wearing it daily. I’ve tried plenty of nice Apple Watch bands, but the Nomad Titanium Band (available in Silver or Space Gray) is in a league of its own. Sure, it’s pricey, but this is one beautiful and comfortable band. 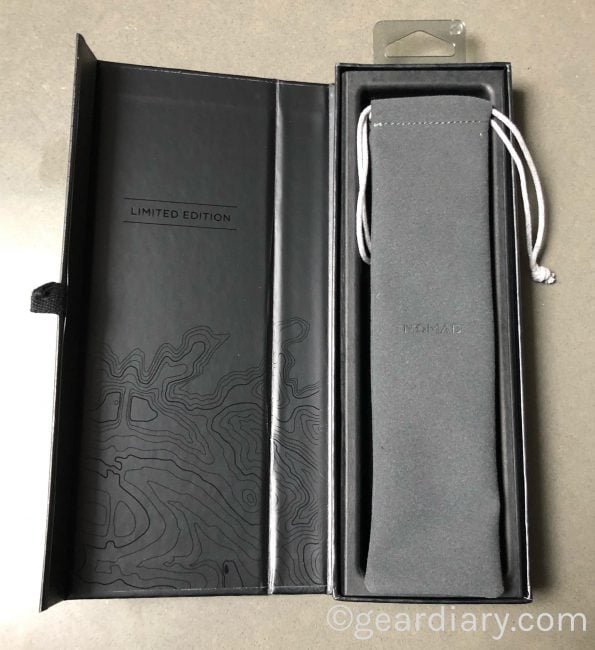 Nomad’s new offering is expensive; at $179.95, there’s no way to sugarcoat that. 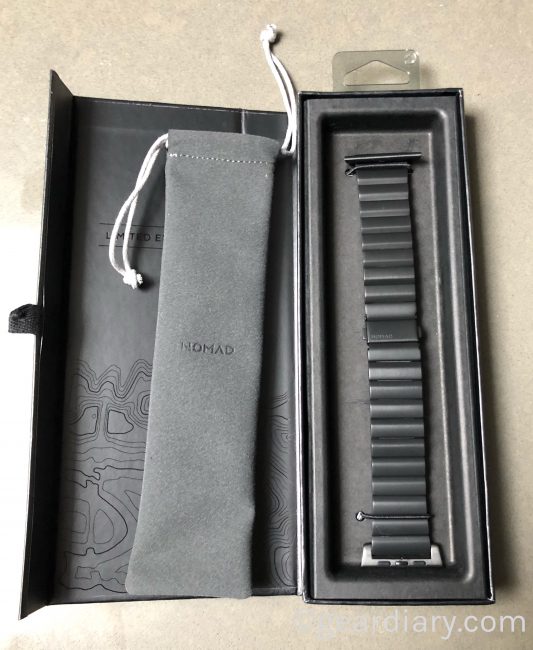 Still, this band is like no other band I’ve used. I got an early review sample, and my daily switching of bands stopped. This is now the only band I’m wearing, and I can’t imagine going back to any of the others. There are a few reasons for that. 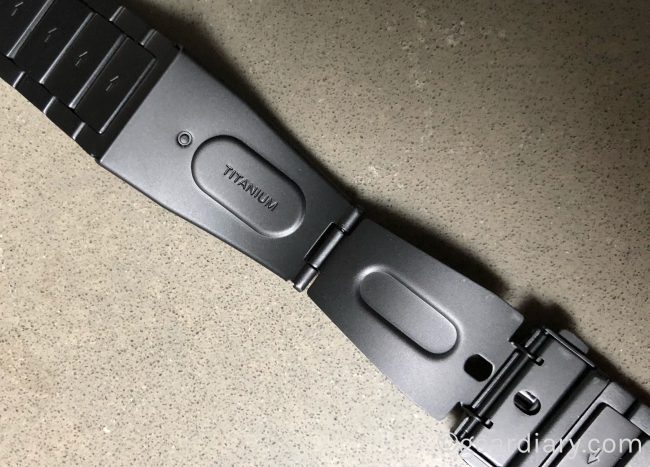 First, the band is light. The links and buckle are made from titanium. Mine is the space gray version (there is also a silver version), and it has been PVD treated for a dark, consistent, and tough finish. The lugs are made from custom 316 stainless steel.

Designed for Apple Watch, Titanium Band has been engineered to be as light as possible while giving you the confidence of a high-end metal link bracelet. Leveraging the qualities of high-grade titanium, this is our strongest strap to date. Built with our custom lugs, this lightweight and robust strap can withstand the roughest of conditions.

The result is a hearty metal band that is surprisingly light. I have another metal band that I had purchased for my original Apple Watch. It looks good, but it is so heavy that by the end of the day it is uncomfortable to wear. 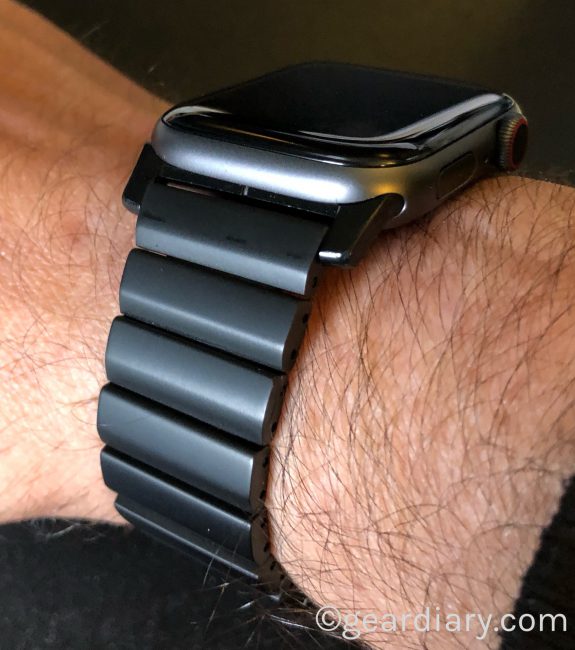 That’s not the case here. The Nomad Titanium band is solid, but it is also light enough to wear all day without feeling like you’re constantly doing arm curls.

Second, the band is tough. I started wearing it as soon as the review sample arrived. Since then I have traveled nonstop, and I’ve had to take the watch off and throw it in my bag when going through airport security

Titanium Grade: This band takes advantage of the natural properties of titanium, offering a smooth and lightweight structure while maintaining unprecedented resistance to the elements.

As I look at it while writing this review, the watch band looks brand new. 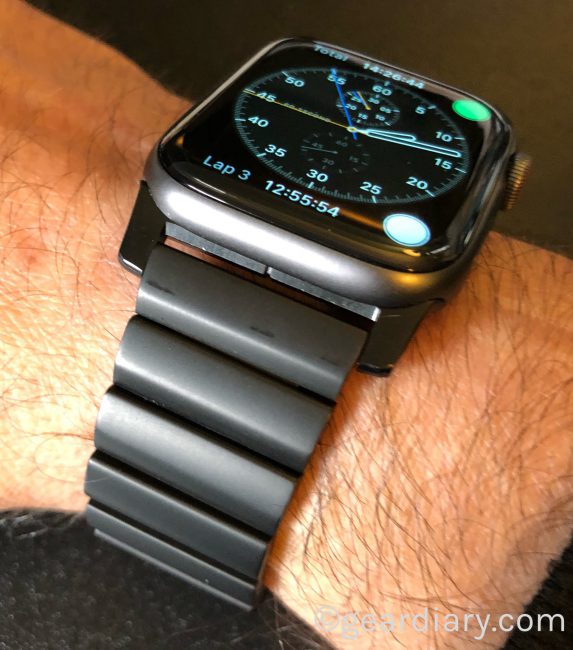 Third, the band is comfortable. The metal band I had purchased a few years ago is not only heavy, but it is cumbersome. That band’s clasp is too thick, and, in addition to having some rough edges, the clasp is so much bigger than the actual band that it is uncomfortable.

Ultra Slim Clasp: The fully integrated titanium clasp is engineered to be as thin as possible while still providing a reliable closure. With up to ten removable links, you are able to customize the band length to fit any wrist. 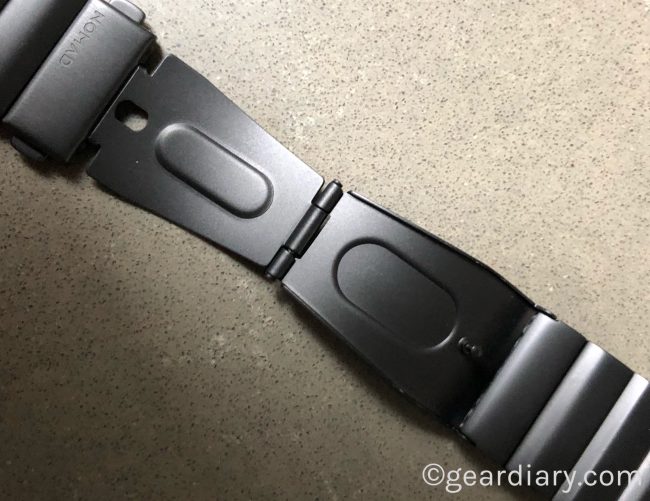 Nomad’s new offering has a thin, light, yet secure clasp; when closed, you don’t see the clasp. 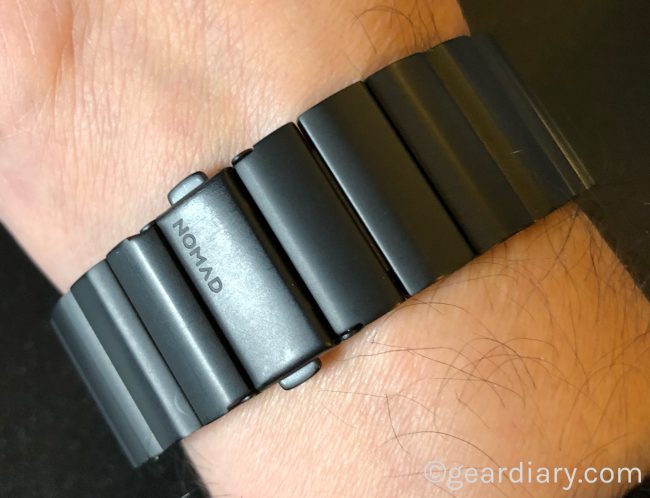 And when open, you immediately see that the two sides of the clasp are smaller than similar bands. Finally, the release mechanism consists of “buttons” on each side and only releases when they are compressed at the same time. In other words, the clasp holds securely; it won’t accidentally release, but it is easy to release when you need to. 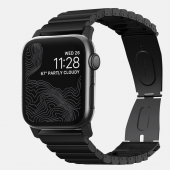 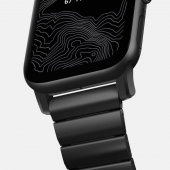 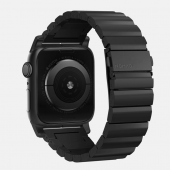 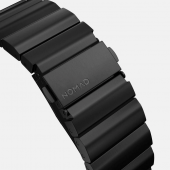 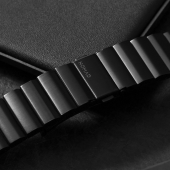 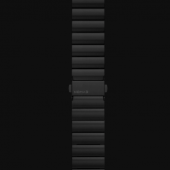 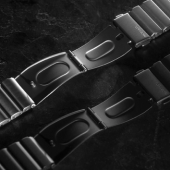 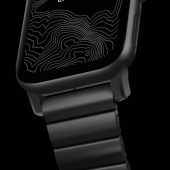 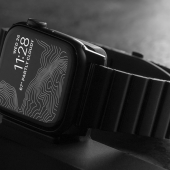 Finally, the band looks fantastic. The space gray of my review sample is a deep, consistent color. The links have just enough form that they grab the light and reflect it in an interesting, eye thing way. Also, it matches my space gray watch perfectly.

Refined Design: Titanium Band encompasses a modern take on a classic metal link bracelet. Designed with over twenty titanium links and a set of our custom lugs, this strap will elevate the look of any Apple Watch.

That last sentence may sound like marketing spin, but the fact is, this band makes my Apple Watch look so much classier than it did with any other band. 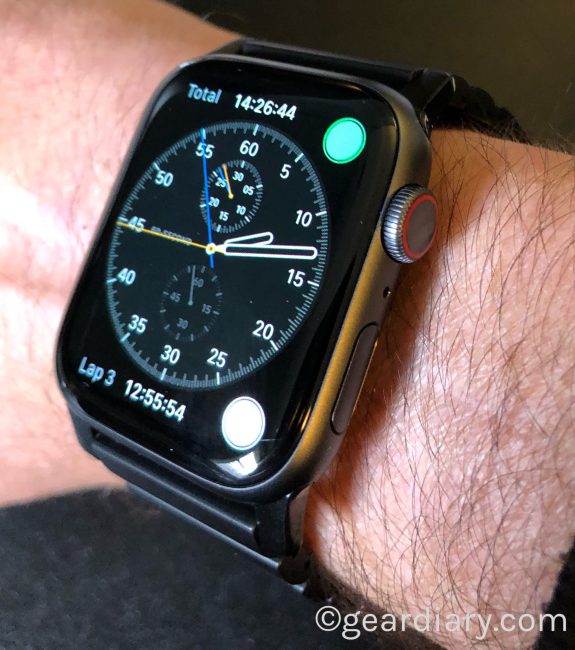 Before closing out this review, it is worth talking a bit about sizing. 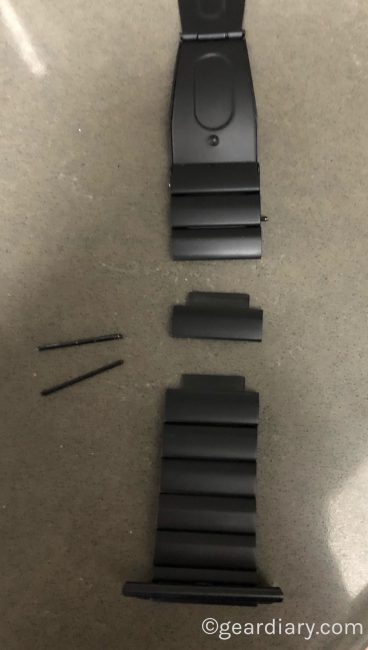 Metal watch bands usually have pins that need to be removed to resize it.

Nomad includes a rather cool device that lets you remove the pins safely and easily while minimizing the risk the band will be damaged. It is a hefty piece of metal and might be a bit of overkill, but when you are speaking about a watch band that is just shy of $180, I’m okay with that. 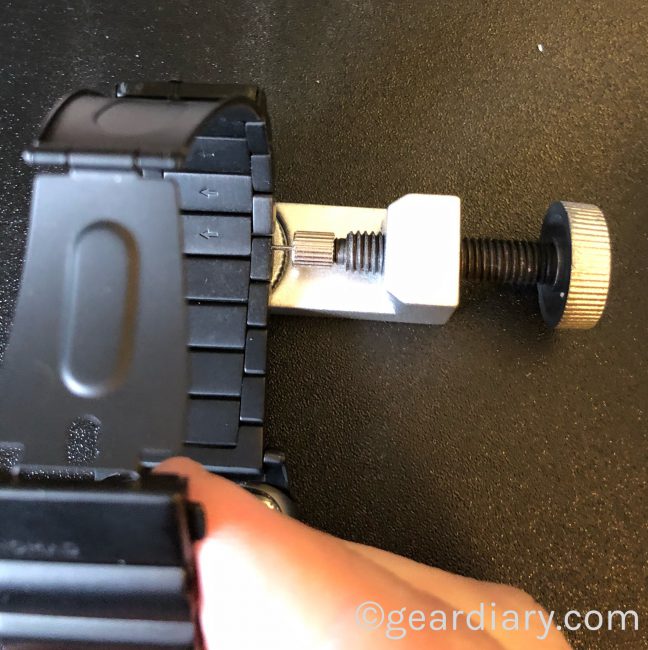 To use the device, you simply insert the band, line up the metal pin on the device (they include three extras) and slowly turn the knob until the pressure from the tool’s pin pops the band’s pin out. When I got my review sample, the removal tool had not yet arrived, so I used a pushpin. It worked fine, but the removal tool makes it far easier and is safer for the band’s finish.

It is also worth noting that the rigidity of the band means you’ll want to take a different approach when connecting it to your watch. As the company explains:

This metal band is rigid and should be attached to your Apple Watch on both sides simultaneously.

The new Nomad Titanium works with all Apple Watches and, as noted, it available in space gray or silver. I love this band and highly recommend it. My Apple Watch looks classier than ever and is as comfortable, or more comfortable to wear all day than any other band I have tried. Check it out here.

What I Like: Looks amazing; Is incredibly tough; Fantastic clasp that holds securely but is easy to release; Light

What Needs Improvement: At its current price, this is a serious investment rather than an impulse purchase (but it is awesome)