This is a love story, but it ends in tragedy. It begins on a ranch in West Texas, travels to New York City, then Tel Aviv and then Jerusalem, and then it all ends tragically in Paris. I’m talking about my experience with the myCharge HubMax Universal, the best battery pack I’ve yet owned … and then lost. 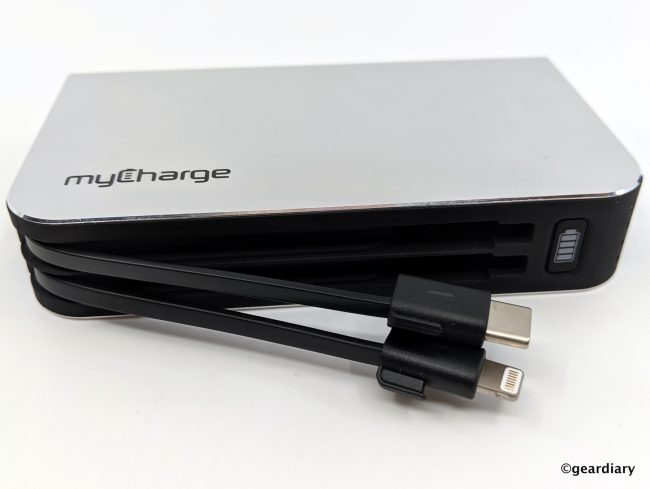 MyCharge has long made battery packs that solved the needs of charging two (or more) different devices at the same time, but what was missing from their portfolio was an external battery pack with the proper built-in cables that could charge both iOS and Type-C devices.

At CES, I was told myCharge would be coming out with just what I was hoping for soon, and I immediately asked to be put on the review list. When the 10,050mAh myCharge HubMax Universal arrived, it quickly became my absolute favorite. Even though I have been primarily using a Google Pixel 3XL since late last year, I sometimes carry my iPhone XS Max; not having to switch out cables or carry a different battery pack is the epitome of lazy convenience. 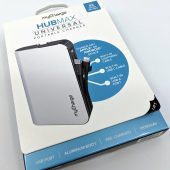 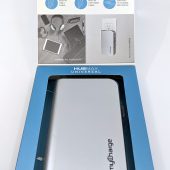 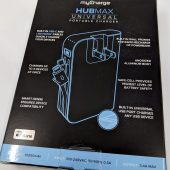 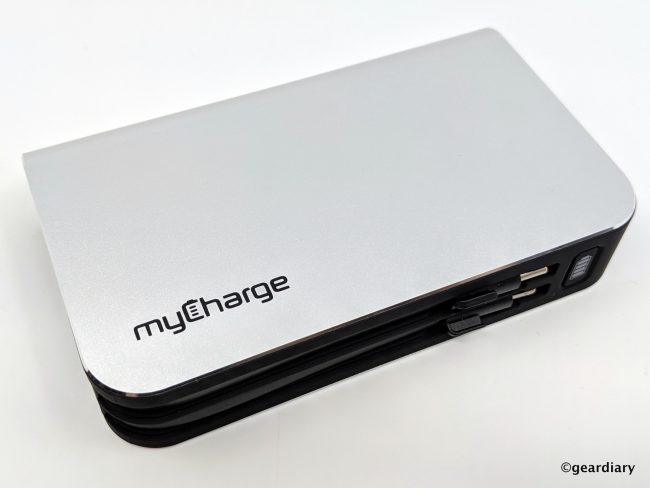 Short connected USB Type-C and Lightning cables are built in. You don’t have to press a button to make the charging commence; just plug your device onto the cable, and it will start rapidly charging.

The exterior is clad in matte silver aluminum, and the sides are composed of matte black plastic. 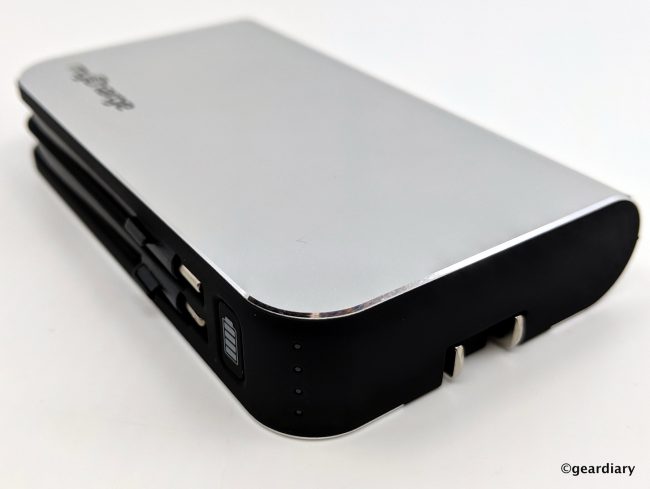 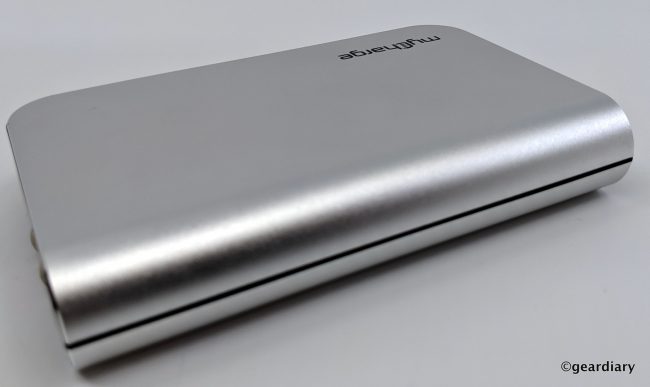 On the bottom, there is an extra USB Type-A port. 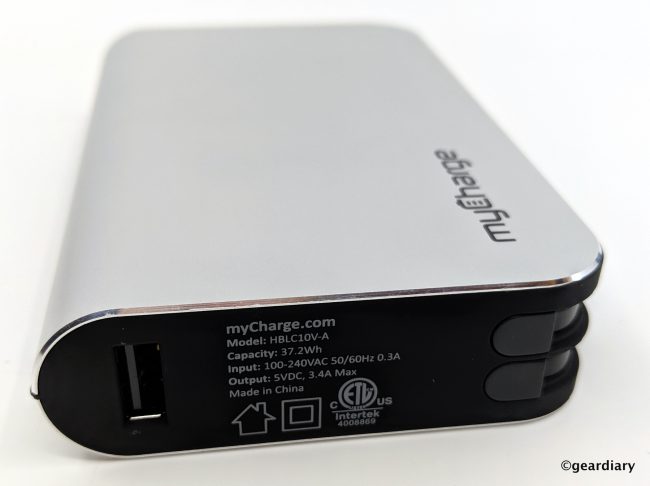 On the back, there is a built-in swing-out US wall charger. 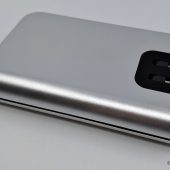 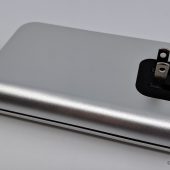 Being able to rapidly charge two completely different mobile devices more than once is completely possible because of the 10,050mAh battery. 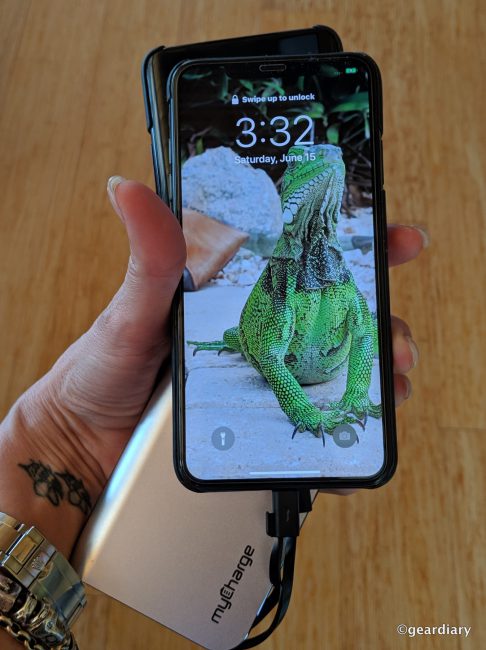 The myCharge HubMax Universal can easily handle the iPhone XS Max and/or the OnePlus 7 Pro.

So here’s the story of how I lost this fabulous charger. After using it for a few weeks in Texas, I took it on my trip to New York; I found myself using it more than the other battery I usually carry with me (it’s one that has a Type-C port that can fast charge Android or iOS devices as long as you have a Type-C cable handy, as it has no built-in cables). It was a no brainer to bring it along on my recent trip to Israel; while traveling, it proved itself repeatedly to be a fantastic and versatile charger. It was at Fauchon, a restaurant in the Charles de Gaulle Airport, where I made my fatal mistake. Faucon had a handy charging station next to my two-top table; I decided to take the chance to top it off while eating my meal before getting on the flight to DFW. Realizing I needed to get to my gate, I paid my bill and took off … leaving my favorite battery pack attached to an EU converter at the restaurant. It wasn’t until I was on the flight that I realized what I had done, and that’s how my sad story ends. But there is a happy ending of sorts — as you’ll see below, myCharge is offering 20% off on this charger between July 8th and 26th when you buy it on Amazon, so that is exactly what I’m going to do.

If you regularly carry Type-C and Lightning devices, you too will love the convenience of the myCharge HubMax Universal. It is compact enough for daily carry, yet powerful enough to handle your fast charging needs throughout even the most hectic days. Just don’t forget it when you plug it in for a quick top-off in a restaurant, and your love story with it will have a much happier ending than mine did. 😉

The myCharge HubMax Universal retails for $99.99, and it is available on Amazon [affiliate link]. If you purchase one between July 8th and 26th (2019), you can get 20% off with the code 20OFFPOWER; this offer is good on the HubMax, HubMax Universal, HubPlus or HubPlus Universal.

What I Like: Compact; Attractive design; USB Type-C and Lightning cables built-in; Built-in wall charger; 10,050mAh; Fast charge; You don’t have to press a button for charging to start

What Needs Improvement: Maybe a built-in alarm so you don’t accidentally forget it somewhere? Ha!

If you buy through the myCharge seller Amazon page, you can get $5 off each charger and you can double up and use a 20 percent off promo code (20OFFPOWER) as well!

Some of the expected bestsellers include: