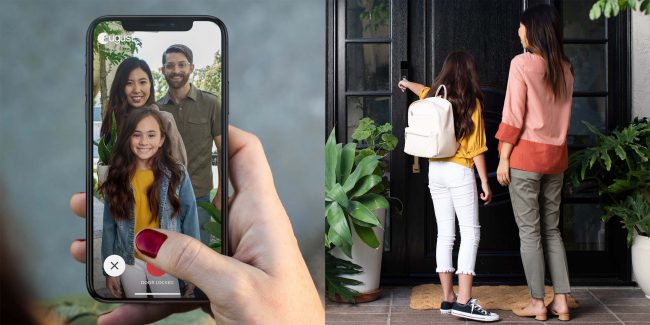 It was just a few years ago that video doorbells were a bit of a curiosity. Few people had them but, just a few years later, they are everywhere. Of course, companies like Ring and Nest offer at least one, and often a number, of video doorbells. Recently some of the big companies like ADT have been getting into the business too. It makes sense since a video doorbell is a key component of any smart home. August made its name with a unique approach to smart door locks and, with the August View, are looking to make inroads into the video doorbell market. Considering how solid and impressive the August View is, I think they have a good chance. 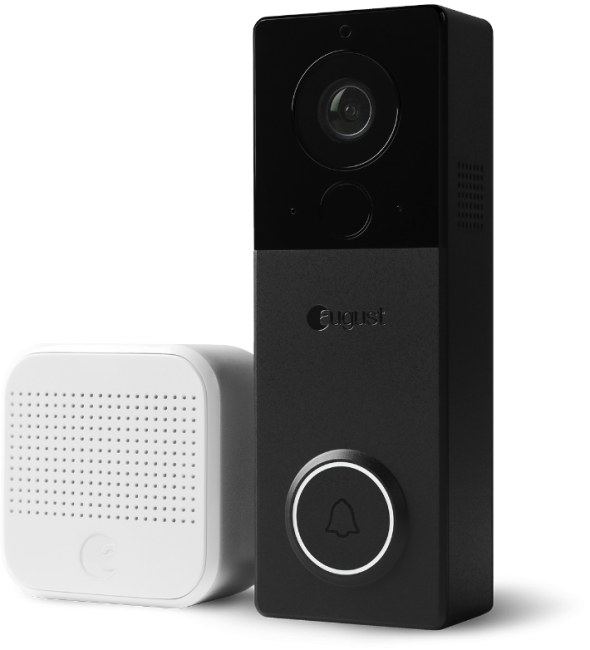 Home even when you’re not: With August View, know exactly who or what is at your door and respond on your terms. Forget hiding a spare key, coordinating a best time, or wondering what really happened. August View will be there. 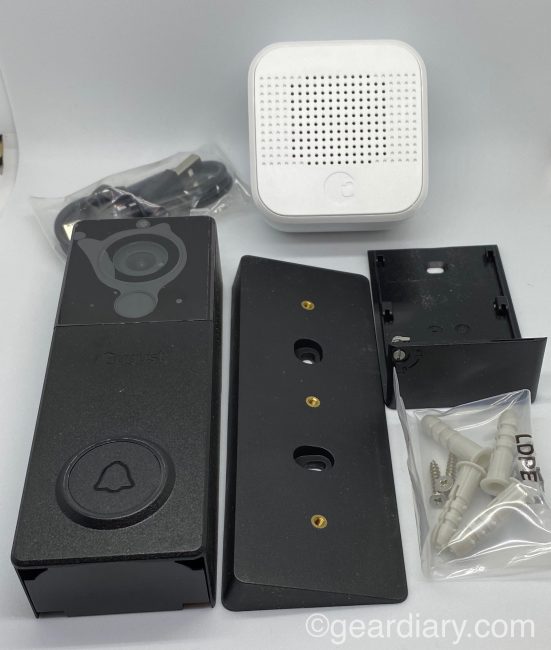 Inside the box, you get the August View doorbell camera, an August Chime, a rechargeable battery, a USB charging cable, mounting bracket and hardware, and a “position wedge.” I love the fact that August not only included a rechargeable battery but also threw in the August Chime as part of the package. That alone puts this product heads and tails above my current and dying doorbell. The old doorbell is rechargeable, but the entire doorbell needs to be removed in order to recharge it. Moreover, after a few years, it no longer holds a charge. But because the battery is sealed inside, the entire thing needs to be replaced. The August View has a removable battery which means it is not only easier to recharge, but it also means a dead battery can be replaced without the need to replace the entire unit. 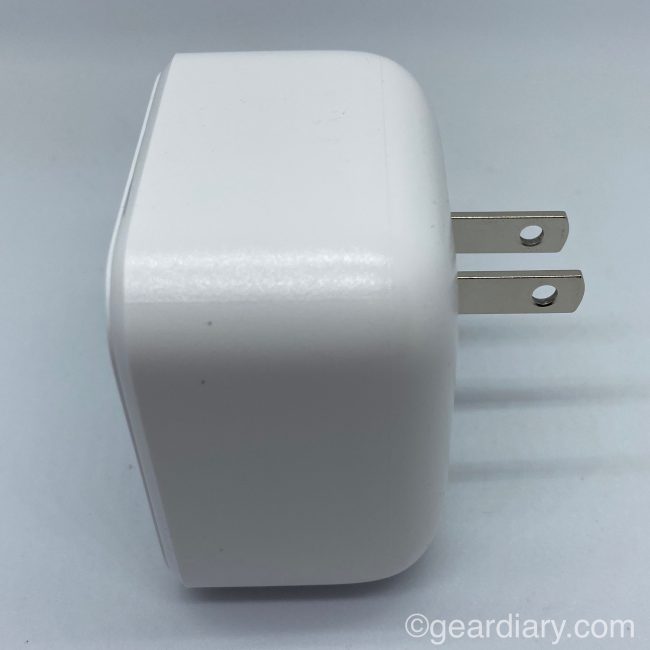 Hear your August View ring inside your home, just like a standard doorbell. Plug it’s chime into any standard electrical outlet in any room and set the volume to the level of your choice. No need to make an additional purchase. August View includes the chime, so you have this extra alert right out of the box.

In order to hear my old doorbell through anything other than my smartphone, I needed to purchase a separate chime. 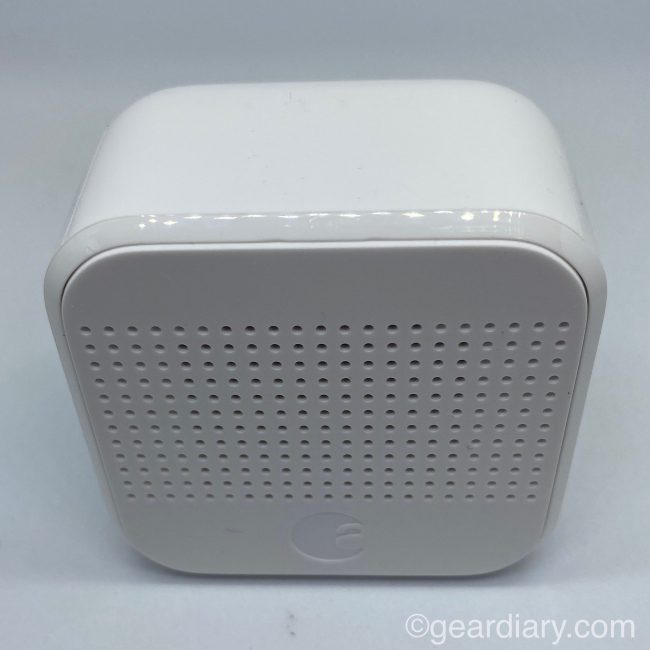 August includes the chime, so all I had to do was plug it into the wall, and I was able to hear the chime anywhere in the house. 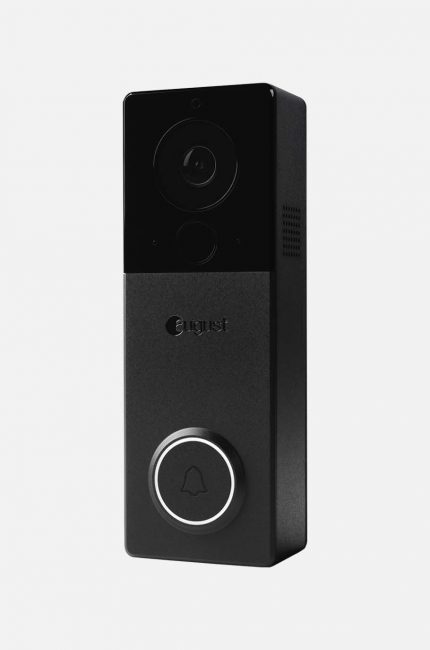 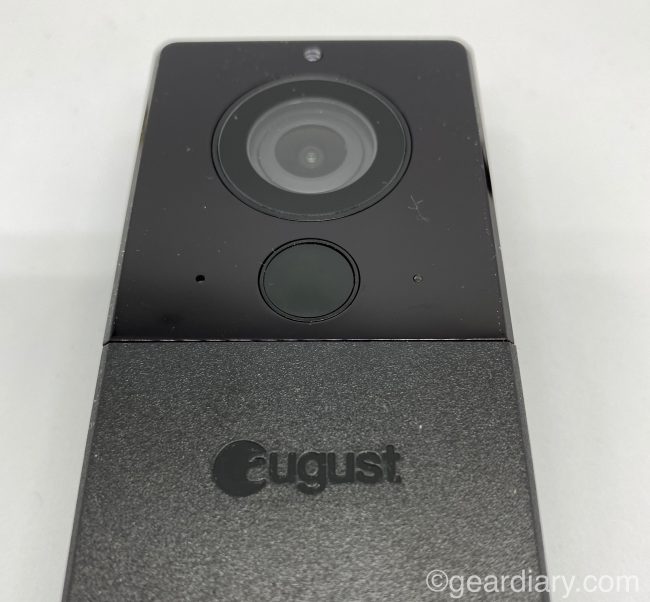 The upper third of the doorbell is a polished black plastic. A small light sensor sits at the top. The camera lens sits just below it, and there are microphones to either side. 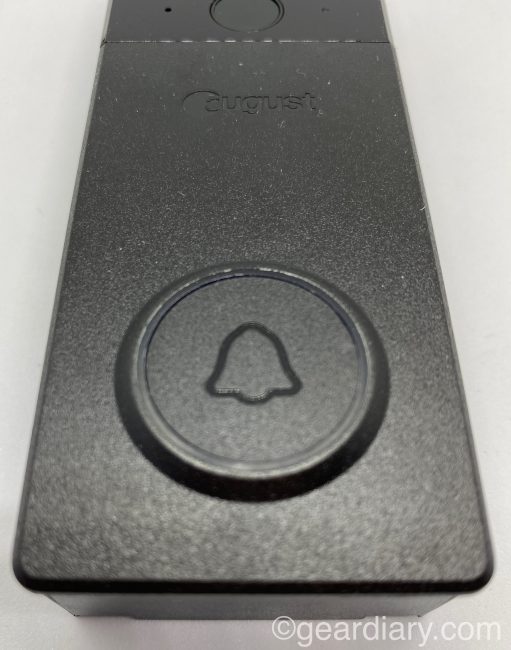 The bottom two-thirds of the doorbell as a textured matte plastic. The August name is embossed toward the top. It is easy to see but not overwhelming. Toward the bottom, there is a raised circle with the image of a bell. This is the actual doorbell that guests push when they want to announce their arrival. 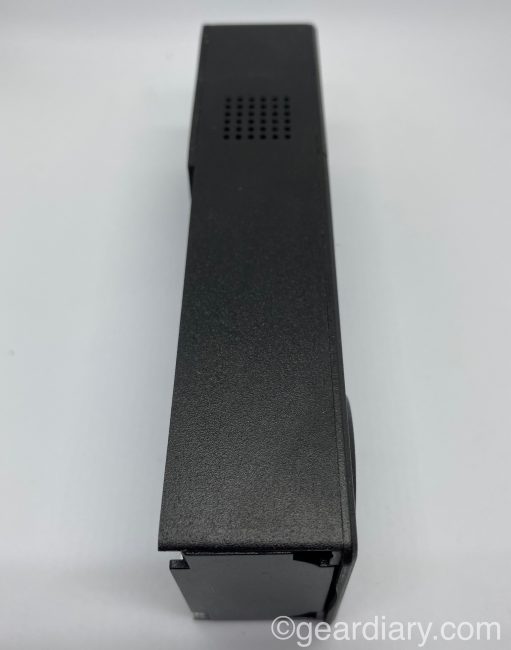 On either side of the doorbell, there are a series of perforations that conceal the speaker that allows for two-way communication.

Optimal positioning for your August View: August View’s doorbell camera works best when it has a clear, direct line of sight to your entryway area with minimal interruption from non-entry related foot traffic such as busy sidewalks. 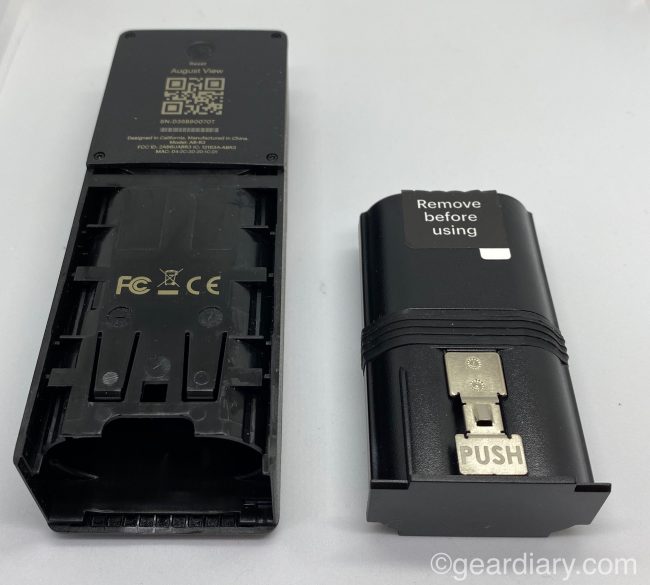 The rechargeable lithium-ion battery has a capacity of 6500mAh and, as previously noted, can be replaced when it no longer holds a charge. By using a battery rather than assuming customers will hardwire the doorbell August made it possible to place the August View pretty much anywhere. That’s a good thing!

Finally, it is worth noting that the doorbell is IPX5 rated for outdoor use. No, you can’t take this doorbell swimming, but it should stand up to the abuses of weather quite well.

August describes their doorbell as offering “a sleek all-in-one design.” That is true, but I will admit it took me a few minutes to appreciate the design. The sharp edges of the boxy device are initially jarring, but, over time, I have come to realize that the design is effective because it doesn’t call attention to itself.

August wasn’t kidding when they wrote:

No special skills are required: Installing August View and connecting it to your Wi-Fi only takes a few minutes. Place August View exactly where you want without worrying about doorbell wires. No need to call an electrician or a handy friend to get started. Once it’s up and running, recharge the battery at any time using the Micro-USB cable that’s included.

Setup was a breeze. I downloaded the August app and, within a few minutes, I had the August View set up and working. (It is, however, worth noting that I had to charge the battery before beginning the setup. This gallery shows a step-by-step process that, after the battery was charged, got me from box to doorbell within minutes.

As you can see in the images, the battery slides into the bottom of the doorbell and is covered with a battery cover that is locked in place using a small screw at the bottom. Once the doorbell is secured to your home recharging, it is as easy as releasing the screw, removing the doorbell, removing the battery and charging it up using the included cable. I have yet to run the battery down, so I don’t know how long it lasts between charges. 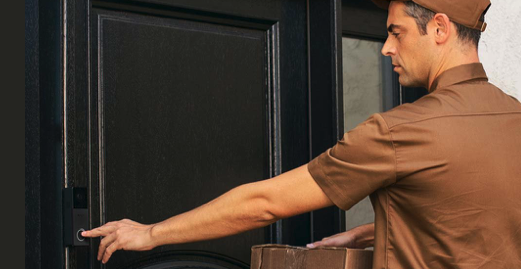 The camera in the August View captures high-resolution at 1440p. The company is proud to note that that is 33% more pixels than full 1080p HD. I didn’t care about the quality of the video so long as I can see who is there until I realized that the increased resolution isn’t about just about the sharpness of the image. Instead, that extra 33% translates into “a wide, clear view of your entryway” and less fisheye distortion than you would get with a camera of lesser resolution. Also, as August notes, the 1440p resolution allows you to zoom in and get a closer look at a person or package.

The August View not only lets you see what is happening at your door in real-time. It can also record and save video previews of activity for fifteen or thirty days with the addition of an August Video Recording subscription. The added subscription is a bit annoying when you consider the price of the doorbell. Still, it seems to be fairly standard in the industry, so the extra cost is probably worth factor in when considering the purchase of this doorbell. 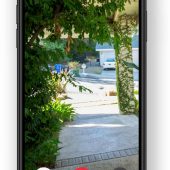 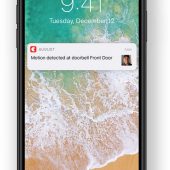 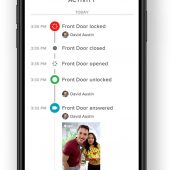 The August App is a key part of this device being able to perform as intended. Without it, you can hear someone at the door, but that’s it. With it, you can access a variety of features such as:

Two other features are common to most popular video doorbells and, thankfully, are present here as well.

The first is August View’s night vision. It has a range of over 10 feet and lets you see what is outside even when it is completely dark. That’s important in its own right, but it also means that anyone who might come to your door in the middle of the night for “unfriendly reasons” will be captured and recorded too. Considering the number of late-night car break-ins my town is currently ensuring, I think this is a great feature. 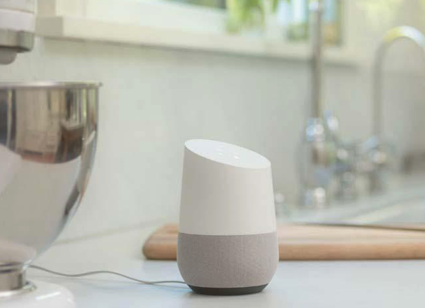 Also, the August View can connect to Amazon Alexa or Google Assistant. Through these smart assistants, you can get notifications when someone rings the doorbell. Alexa will also let you know when motion is detected. Even better, if you have an August Smart Lock and an August Connect Wi-Fi Bridge, you can lock and unlock the door using your voice or let guests in even when you aren’t home. 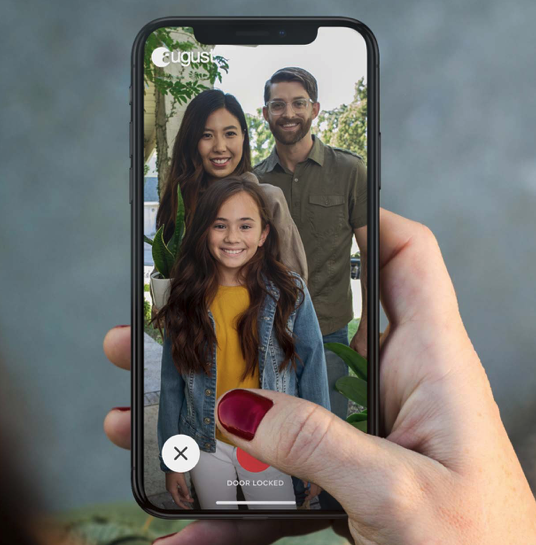 The August View smart doorbell is $229.99. That’s comparable to other popular video doorbells such as the $200 Ring Video Doorbell 2, which also requires the purchase of a $30 Ring Chime or the hardwired $229 Nest Hello Video Doorbell. I like the simple, angular design of the August View. I like the fact that they include an angular mount, so you have greater flexibility when finding the right location for installation. I like the removable battery that doesn’t require wiring, can be installed by any homeowner, and can be replaced when it no longer holds a charge. (Hey Ring… my doorbell holds a charge for less than a week and can’t be replaced. What’s up with that???) I like the fact that August included the August Chime right in the box, and I appreciate the quality of the video it captures. I especially like the night vision since I am far less worried about who comes up to my house during the day. Knowing there is a camera watching all night gives me peace of mind- especially when Raina is home alone.

Ultimately, whether you choose the August View or not depends on several factors. If you already have one of August’s smart locks purchasing the August View is a no-brainer. The two are designed to work together, and, when they do, a host of features and controls become available. If you rely upon Amazon’s Alexa or, to a lesser degree, Google Assistant, the August View is a smart choice. If, however, you are already deep into another company’s ecosystem such as Ring or Nest, the August View might not be the best option since there will be less integration between it and the other parts of your system. I am heavily invested in one of those aforementioned systems, but I’ll be permanently installing the August View shortly. I won’t put it on my front door since I do want that extra integration, but it will be ideal by the new gate we installed that leads to the newly re-fenced back yard and pool. It will not only let us know when people come for a swim this summer, but it will also keep an eye on that access point 24/7. I like having that kind of security!

The August View retails for $229.99 and it is available directly from the manufacturer.

What Needs Improvement: Not as tightly integrated into another system you may already be using