About two weeks ago Thomas mentioned a brand-new microphone that was about to be released, the Sampson Meteor Mic. He told me that it not only had a great look to it but that all reports indicated it worked beautifully. It was small, easily transportable thanks to its fold up design, and it looked pretty cool. Most importantly it apparently offered excellent sound quality. I told him I’d have to look into it.

I was fortunate enough to have a review unit waiting for me just two days later. I’ve been using it ever since and have been incredibly impressed with it. I like the look as it has a bit of the “retro appearance”, but more importantly it works incredibly well. The first thing I did with it was  try it with Dragon Dictation, and I have to say that I’ve never had more accurate recognition than I do with this microphone. It has nothing to do with the way in which I’m speaking and everything to do with the quality of the audio being fed from the microphone to my MacBook Air. That alone makes it worth the $99 price in my opinion.

Let’s take a look at the device itself and why I’m really very impressed with it. Break on through: Meteor Mic is the universal solution for recording music on your computer. Perfect for your home studio, Meteor Mic is also ideal for Skype, iChat or voice recognition software. With Meteor Mic, you can make incredible recordings that are out of this world.

Solid and sound: Producing rich audio recording for any application, Meteor Mic has one of the largest condenser diaphragms (25mm) of any USB mic available. Its cardioid pickup pattern, smooth frequency response and 16-bit, 44.1/48kHz resolution give you professional audio results no matter what you’re recording.
Meteor Mic’s chrome-plated body includes a fold-back leg design that looks amazing on your desktop. And the legs adjust to the optimal position for any recording application from acoustic guitars to vocals or speech.

A stereo 1/8-inch headphone output for no latency monitoring and headphone volume knob give you complete control. A microphone mute switch gives you audio privacy while video conferencing. We’ve integrated a mic stand adapter into the bottom so you can mount the Meteor Microphone on a boom or desktop stand. Since there’s no need for drivers, you can start recording right out of the box on any computer. And Meteor Mic is compatible with most computer-based digital audio workstations. A USB cable and carry pouch are also included. The bag is a nice addition considering the fact that the microphone, as you can see in the picture above, folds up into a nice relatively small package. Pull the microphone out of the box and pull down the legs, and you get a standing rest microphone.

The microphone is made of high quality metal and the screen protecting the internals is heavy-duty. There is nothing plastic on this microphone nor is there anything that indicates any thing other than “this is a high-quality product that’s meant for serious use”. On the front of the microphone is a volume dial with a mute button in the center, a power indicator directly above and the company name embossed below. On the back of the microphone you’ll find the mini USB plug for connecting the included cable and a 3.5 mm headphone jack so that you can listen to audio without it bleeding into the microphone. This is particularly handy if you’re using the microphone to create music or to do a podcast with a partner. One of the unusual and quite nice features of the microphone is the foldout design. As previously noted, it folds up into a small compact unit but the legs can be pulled down with ease. This allows easy transport of the microphone but it also allows you to opt for how high off the desk or other surface you want the microphone.

You can have the legs rather shallow which allows the microphone to be close to the surface. Or you can get them at the sharpest angle possible and raise the microphone off the surface as far as it can go.

Again I need to emphasize that there is nothing about this microphone that communicates anything other than “high quality, serious, microphone.” (edit) Even with the USB cable connected to it it’s a nice neat package. I’m quite please with just about every aspect of this microphone. I like the style and the design a great deal, although my wife Elana does not. The build quality is excellent but, most of all, I’m blown away by its quality. I use Dragon Dictation of the time on my Mac, and I’m used to it being “very good” but never “perfect”. Something about this microphone changes that, and I can only describe Dragon and this microphone as being as close to “perfect” as a fast-talking boy from New Jersey is going to get. The best way I can describe it is that it almost seems as if Dragon got an update with regard to its recognition engine by the addition of the Meteor Mic; that’s pretty impressive from a microphone that costs under $100. There’s another trick that this device has up its sleeve. Most USB microphones draw a fair bit of power from their “host” and, as a result, cannot be used with a device such as the iPad. That isn’t the case with this particular microphone. So long as you have purchased Apple’s (super ridiculously and absurdly priced) camera connection kit, you can simply plug this microphone into your iPad’s dock connector, fire up GarageBand, and record to your heart’s content. It works beautifully and gives the same high quality audio that I’m finding on my MacBook Air.

So in short, this is one of those products that I am thrilled to be reviewing, recommend without hesitation, and would go out and buy tomorrow — were I not able to keep the review sample and continue using it for long-term review. More information on the Samson Meteor Mic can be found here on the Samson website.

What I Like: compact design; excellent build quality; looks pretty cool; does a fabulous job of grabbing clean audio; helps Dragon dictation work better than ever

What Needs Improvement: some won’t like the retro mod style of the microphone 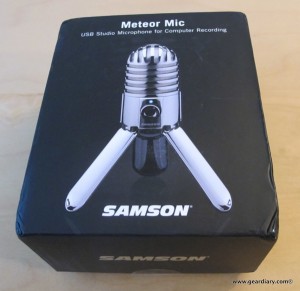 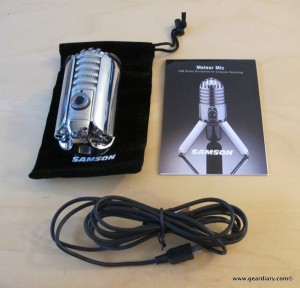 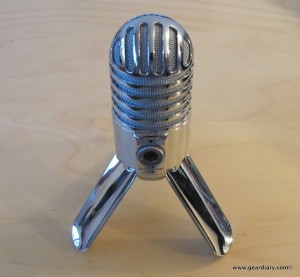 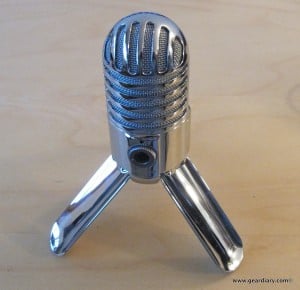 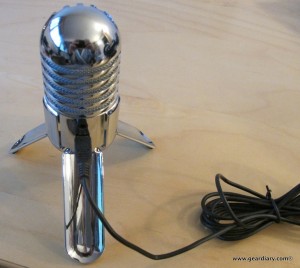 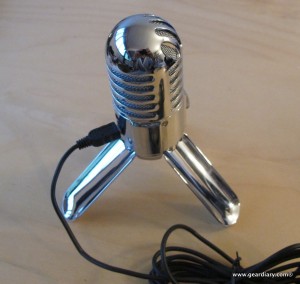