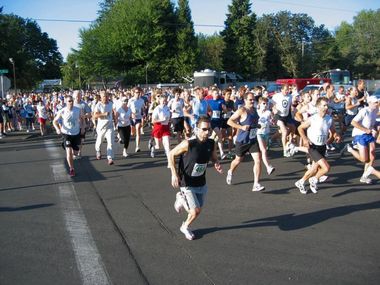 Do Gimmick Runs Hurt The Sport

A recent New York Times called ‘The Slowest Generation’ slams the younger generation for abandoning competition and running races ‘for the bling’. The article – and the ‘Dumbing Down, Slowing Down’ article that inspired it – contend that competitiveness is dulled in the aftermath of a generation raised on ‘everyone gets a medal’, and finishing is now its own reward.

The articles point to an increase in average finish times for races, the increased popularity of non-timed ‘gimmick’ races such as color and mud runs, and the move to stop funding elite runners at races by Competitor Group. They say that the effect is the removal of competition from the sport because few young people feel they have anything to prove.

But are those the only possibilities? Let’s look at some other options:

But even taking all of these into consideration, it is hard to debate that elite American running talent has thinned in the last three decades. That year there were nearly 200 American men who ran a sub-2:20 marathon… and each of the last two years there were fewer than 75 men who achieved that distinction.

At the same time I am bothered because the entire thing smacks of the same ‘if your time isn’t better than X, then you are not a REAL runner’ mentality that needs to just stop now. It is one thing to talk about the lack of Americans running the same pace as 30 years ago, and another entirely to blame mud and color runs for the ruination of competitive running.

Personally, I would never run ANY race with anything other than the best of my ability. I will never challenge the elites, but I keep working to improve my times – but always while enjoying myself and focusing on both short and long-term goals.

What do you think? Is a lack of competition ruining running? What about other sports – are we losing our edge in an ‘everyone wins’ society?