I’ve been an Android user ever since I received a G1 as a gift. I’ve only ever had Android phones and tablets, so I haven’t had a lot of exposure to iOS. When my workplace offered us a phone for work use, I had a choice between a Galaxy Note 4, a Galaxy S6 and the iPhone 6.

I decided to make the leap and go with the iPhone 6 which ends up being not as bad as I thought. 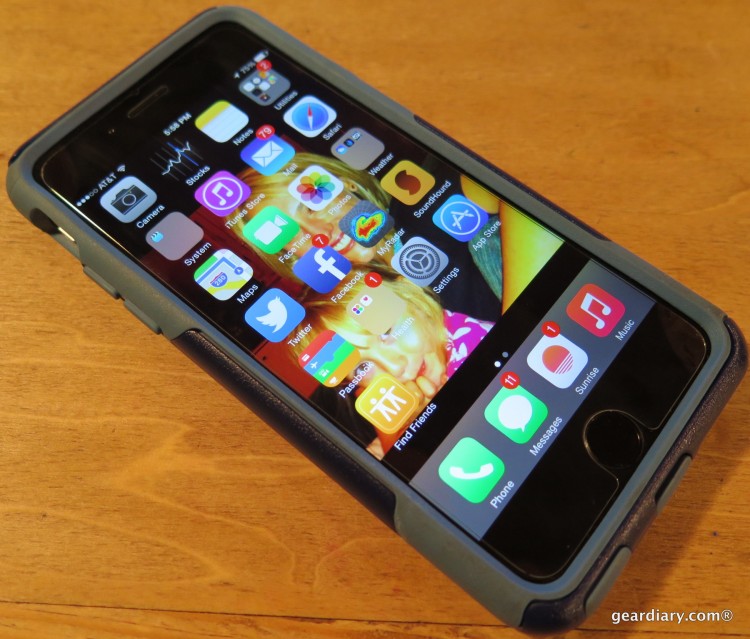 The only iOS devices I’ve ever held more than once have been my wife’s iPhone or iPad and my son’s iPhone.  While I will probably almost always prefer Android, I decided that I had better get some iOS experience just so I could be of better help to my wife and son. Well, that and it only took a couple Samsung devices to completely turn me off TouchWiz, even though my Note 3’s TouchWiz was very understated, I still prefer stock Android, which is why I chose the Nexus 6 a few months ago as my personal phone and will still use that every day.  My iPhone is used for work and minimal play with a handful of non work related apps installed. Why did I chose an iPhone?  The only Android phones my company offered were the Galaxy Note 4 and Galaxy S6, both Samsung devices.

The OS is very smooth and the phone is fast. I don’t see any lag with iOS on my iPhone 6 at all, and it works very well. I like the updates that added an Android-like notification area, and the recent enhancements that cut the amount of taps to do things, like turning off Bluetooth and WiFi are very needed.  The times that I used my wife’s phone, when I had to dig through the Settings app to find things, were a huge turnoff. The improvements they made were needed.

I am looking forward to some of the other improvements coming in iOS 9, which also brings up another place where iOS is a better experience: I don’t have to ask when the update will hit my phone. Google IS getting better at this, but it’s still an issue on Android.  You never know when the OS update will hit the phone. With iOS, it’s not a guess. You know.

The interface is very simple and easy to understand. It’s easy to see why many gravitated towards it after the Blackberry fell from prominence.

What I Dislike About iOS

The interface is almost TOO simple.  Case in point, I like how Android maintains a full app menu and lets you add your most frequently used apps right to the desktop.  Not so with iOS.  Sure, iOS has folders and that has helped it a lot, but I don’t want apps to drop icons on the desktop.  It would be nice if Apple adopted the Android style menu where apps you don’t use as much weren’t in a full menu … or at least put their spin on it.

I do miss the Android style back button on iOS.  While I can work around it, I prefer stabbing the back button to go back to what I was doing. It makes the most sense, to me, and how my mind works. Some of this has been solved in iOS 9, but it’s not quite the same as Android. It doesn’t feel as intuitive, to me, but I can manage,

I also miss widgets. There’s something to be said about glancing at the desktop to find your next appointment.  I miss that when managing my calendar on iOS. The calendar being in the pull down is nice, and I actually use Siri to ask when my next appointment is most of the time, but sometimes you just can’t talk to your phone.

The thumbprint reader on the home button is pretty cool.  It’s not a new feature even on phones, but I use it every day and it’s really nice to just use my thumbprint instead of having to remember a password or enter my pin number. It doesn’t really make things more secure, just more convenient.

The switch for turning off ringers is awesome, and this is something I wish Android phones had.  You can, of course, do the same with onscreen menus on Android, but I like that I don’t have to think or remember what menu it’s on — just flip the switch and it’s off!

Also, while I DO prefer bigger phones, the iPhone 6 isn’t too bad size wise. In fact, since I travel for work, I appreciate the smaller size just for using during the trip. Even my son’s iPhone 6 Plus seems a bit smaller than my Nexus 6.  Until you put it in a case.

One thing about the iPhone that is very nice is that the amount of accessory support for it is staggering due to its popularity. While I am not huge into accessories, there’s almost a guarantee that you can find a case locally that will work for you. On the internet, the case selection is near infinite. Other items like docks and other iPhone only accessories are easy to find. I’ve always been a bit envious as an Android guy and now I can play a bit with some of these accessories that I was never able to before.

What I Dislike About the iPhone

From supporting my wife, I dislike the Lightning connector. Even Apple branded cables seem to easily have half the life of any MicroUSB cable I have ever used.  I also have not been able to find too many docks for the iPhone when the switch was made to Lightning. Still, it does have the advantage of not having to plug it in a certain way.

I also have been having minor issues when making calls with the iPhone 6 in conjunction with a Bluetooth headset.  I had a call today, and the headset was attached, but the call went to the earpiece and not the headset which is strange.

Why I will Stay an Android User

While I will probably continue to check out iOS devices, I still prefer the more open platform of Android.  The interfaces can very much more on Android which is a plus and a minus, but I do like choices,  I also like that there is just more variety design wise on Android. Don’t like your phone? Wait a month and a new one will be out. With iPhones, there’s only one design update a year, and many times it’s just not worth jumping to the new device. I also use Android Wear, and while iOS just got support for it, the Android support goes much deeper than the rudimentary iOS support the app provides.  Sure, I could buy an Apple Watch, but the thing is I don’t want to buy a watch that ONLY works with one or the other.  While Android Wear is better when paired with an Android device, it does work with the iPhone, which is why I will continue to use Android Wear.

Plus I have to break it to iPhone and Android users: Your smartphone is just a smartphone. Either smartphone can do 95 percent of what the other can do.  That 5 percent where each one is better isn’t enough for me to switch from Android to only iOS. You may think differently, but for my use it doesn’t matter which one I pick up.