It’s easy to write off Barnes and Noble as the underdog in the ebook space; Amazon has clearly and thoroughly claimed the majority of the marketshare. B&N may be down, but they’re not out, and they’ve stumbled across a niche in ebooks that Amazon HASN’T conquered yet. They made a waterproof, dustproof NOOK GlowLight. 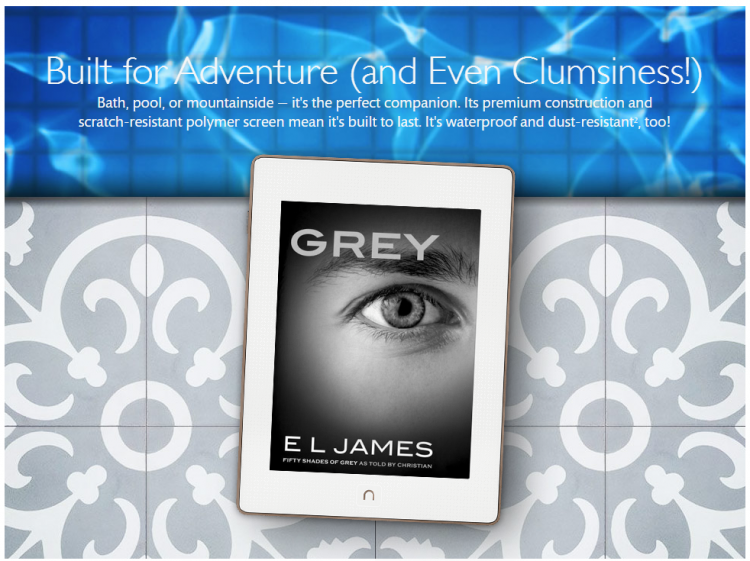 The only competition B&N has in the waterproof space is the Kobo H2O, and the average consumer in America probably hasn’t seen a Kobo for sale in a store since Borders went bankrupt, so this is a huge opportunity for B&N. The biggest complaint most people have when ebooks come up is that they can’t read on the beach/in the bathtub/by the pool without risking their device, and most of the accessories to make these devices waterproof are clunky at best.

And it stands to reason that many of the holdouts to ebooks for that reason are shopping at B&N, so they have a good chance of converting those reluctant users with the new NOOK. It also helps that you can’t walk into a B&N without being confronted with a GIANT display of NOOKs once you clear the doors. (As an aside, look up the book “Why We Buy”, which looks at shopping habits and the psychology of placing something you want seen about 10 feet in from the front door).

The new NOOK GlowLight with waterproofing and dust resistance is only $129.99, and assuming Amazon doesn’t surprise with a waterproof Kindle, that price makes it likely to be a big holiday seller for them!