The MacBook Air may not have been the first ultra-portable, but within a few years, it set a standard upon which other thin and light notebooks were judged. One thing it has never been, however, is cheap. Plenty of people would like a light notebook, but simply can’t afford it. 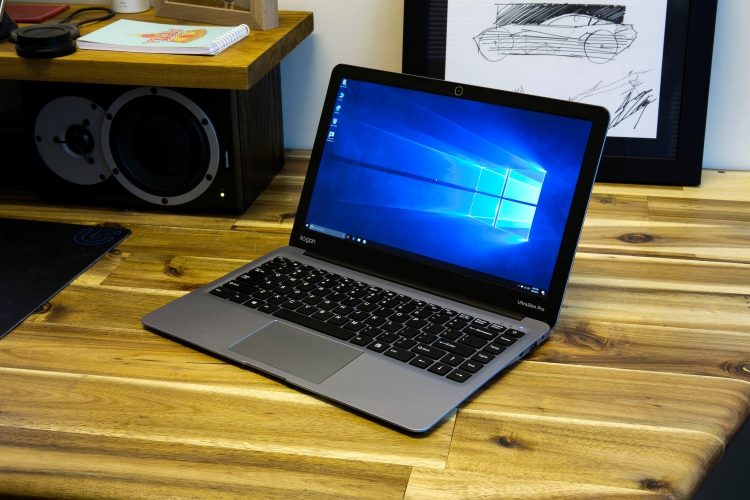 In their usual way, Kogan has stepped up to the plate with a new product, the 1.35kg Kogan UltraSlim Pro, which promises solid performance, well-rounded connectivity, and a larger-than-netbook display for an affordable price.

Now I’d be remiss if I didn’t note the striking design similarity between the 13-inch MacBook Air and the Kogan UltraSlim Pro. You’d have a hard time convincing me the metallic, wedged body and floating black keyboard weren’t inspired by Apple’s notebook (and, to be honest, some of Samsung’s). 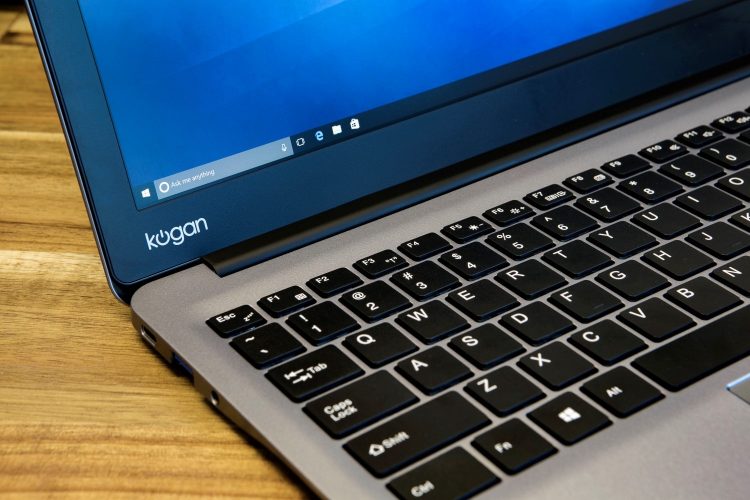 Ultimately, though, there are only so many ways you can make an affordable thin-and-light, and the UltraSlim Pro certainly looks attractive enough. The completely blank lid is begging to be personalised with a few vinyl decals, though, and the name is a bit of a clumsy mouth-full. Something more industry-standard like “Kogan UltraBook Pro” would be a bit clearer. 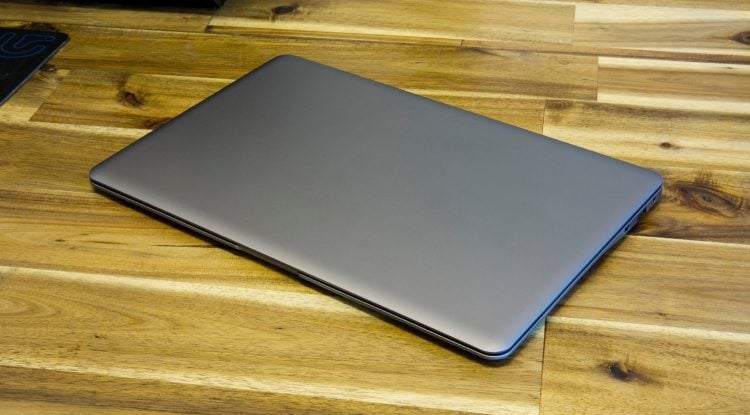 The Kogan UltraSlim Pro is based on Intel’s Skylake architecture, featuring an ultra-low power, 4.5W fanless Core m3 2.2Ghz processor. This is pretty far down the ladder in terms of performance, but it should be up to the basic tasks of web browsing and video playback.

It’s backed up by 8GB of RAM (LPDDR3, if you were wondering), which is more than enough for the average user. Windows 10 runs very happily today with less, so it’s nice to see Kogan hasn’t skimped, and somewhat future-proofed this machine. 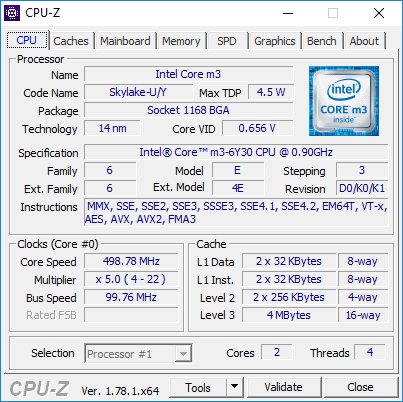 As someone who used a base-model early 2015 MacBook for a year for everything bar video editing (including RAW photo processing), I’m convinced these CPUs are fine for most people. Opening up a browser full of tabs, watching YouTube in FHD and listening to streaming music were no issue on the UltraSlim Pro. During all usage scenarios I threw at the UltraSlim Pro, it stayed cool to the touch. 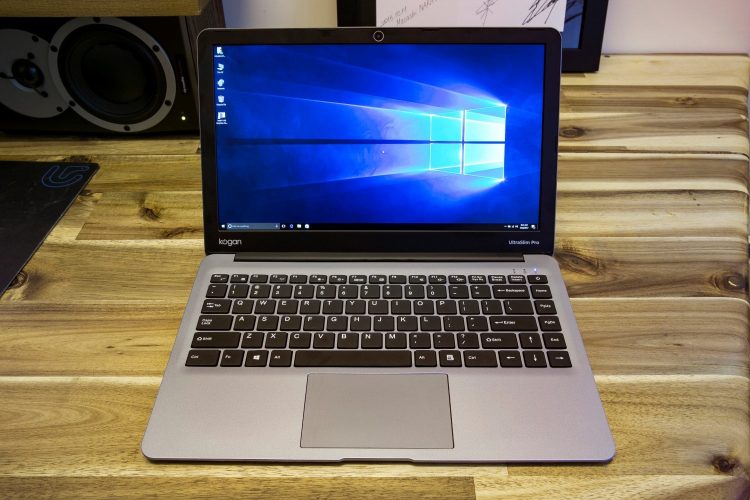 What’s most impressive is the display and storage.

Unlike a lot of cut-priced notebooks, the UltraSlim Pro has an impressively good display: a 13.3-inch IPS panel with a WQHD 2560×1440 resolution. Kogan makes no claims about the brightness, but my i1Display Pro measured a bright 335 nits, making the UltraSlim Pro a pleasure to use even in brighter environments.

The viewing angles are excellent too, with no colour shifting, and only a slight washing out at wider angles. When looking at it straight on, it’s crisp and pleasant. The hinge is very firm, which is great when typing as the display doesn’t wobble, but opening it is a two-handed affair, as the base is so light it doesn’t stay down.

The only downside to the high-res display is text can be very small unless you use scaling which, in Windows 10, is still very hit-and-miss. I suspect many will choose 150% as the best compromise between easy-to-read and desktop space. My personal setup had Windows at 100%, and Chrome at 150%. 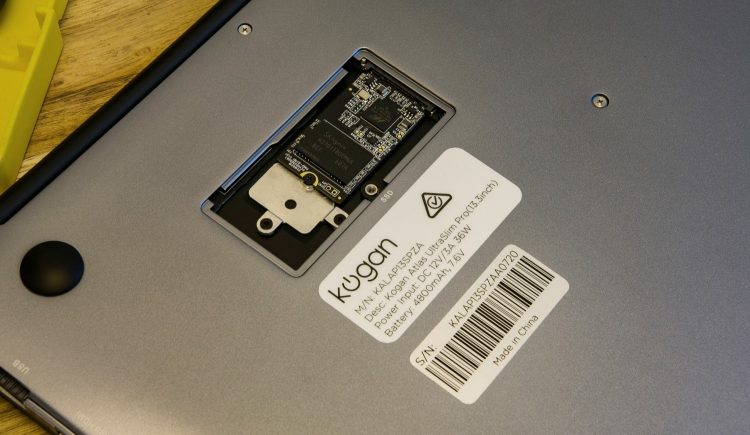 Storage is taken care of by a 256GB SSD, twice the size of the entry-level 13-inch MacBook Air (at the time of publication) that costs AU$1549. While not a capacious as the standard hard drives you’ll find in other sub-$1000 computers, it will be far, far faster. Even though it’s not some high-performance Samsung PRO-series drive, any SSD offers a noticeable performance improvement in everyday usage compared to a spinning disk and helps to make up for any shortcomings the Core m3 may have. Out of the box, there was approximately 215GB available. 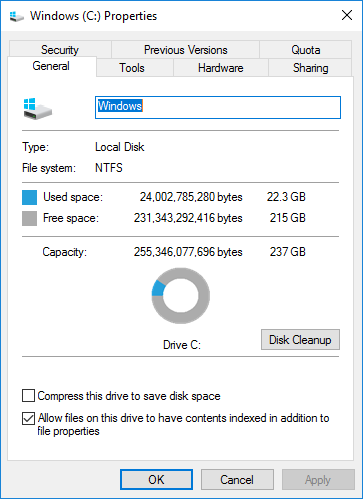 The trackpad is nameless and unremarkable, showing up in Device Manager as a “Microsoft PS/2 Mouse”. The size is good, and it’s reasonably responsive, though the click is pretty unsatisfying. Two-finger scrolling was reliable enough, though I would love a way to reverse the direction (ala. “natural” scrolling on Mac). 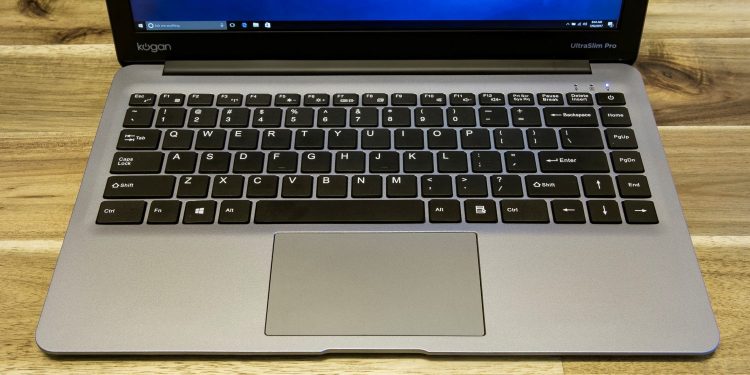 The keyboard is excellent, with full-size keys, and a very stable feel. None of the keys wobble or feel mushy, and they have a great resistance and travel to them. To be honest, this was the most surprising part of this notebook. The short right shift key took me a little bit of getting used to, but the full-size Home, Pg Up/Down, End and arrow keys are a welcome inclusion. The function keys are well laid out too, and I like that the all-important F4 key isn’t working double duty, basically dedicating it to the Alt-F4 close command.

So where’s the cost cut here? Backlighting. You won’t find any on the Kogan UltraSlim Pro, though the good layout and feel make it easy enough to type quickly in the dark if you’re a touch typist.

The bottom-firing speakers are poor, to say the least, with weak volume, and no bass to speak of. They are easily worse than a lot of phones and tablets are capable of these days, so save yourself the displeasure and plug in some headphones. 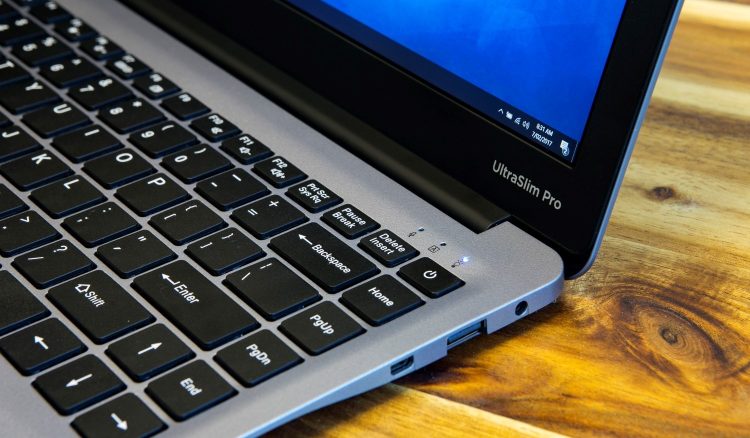 With the low-powered hardware, you’d expect some exceptional run-times, but I’m afraid you’ll be disappointed. Kogan is touting “up to 8 hours” of life from the 36Wh battery when watching videos at 25% brightness. It didn’t mention whether WiFi was turned on or connected. 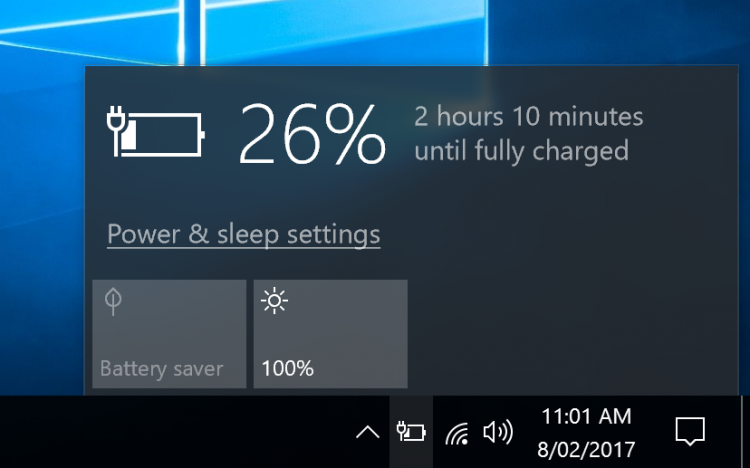 My measurement showed 25% on the Windows slider to be the equivalent of about 80 nits, which is pretty dim. Sitting in a dimly lit coffee shop typing this review, dropping the display to 25% is uncomfortable, while 75% is about right. 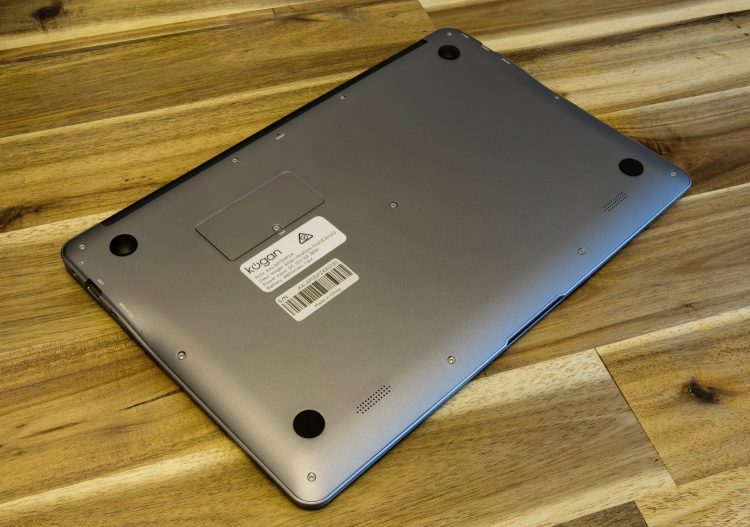 At this sort of brightness level, the Kogan UltraSlim Pro made it to just over four hours running Google Chrome, connected to a strong WiFi network. Microsoft’s Edge browser might (and I say again, might) offer slightly longer run-times that Chrome, but considering Chrome has over ten times the market share of Edge, I think it’s fair to test with it. It is, after all, the browser I use day-to-day. Charging time wasn’t all that strong, taking over 2.5hrs from almost-empty-to-full when in use. 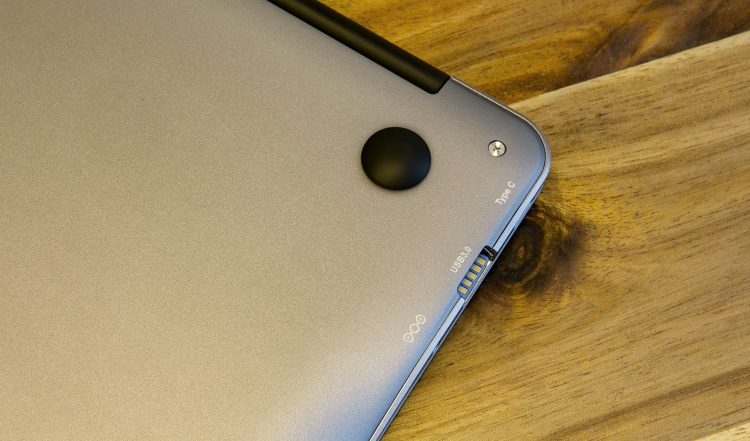 Connectivity is well catered for on the Kogan UltraSlim Pro, with one microHDMI, 3.5mm headphones, USB 3.0, USB 2.0, and a USB-C port, respectively. The charger is a separate barrel plug as well, so it doesn’t eat into your data ports. 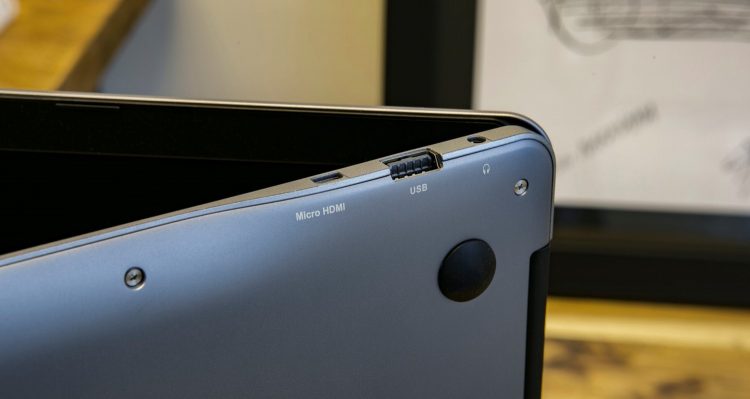 The inclusion of both regular Type-A and new Type-C USB ports will keep things current for longer. I still find it odd that computers in 2017 and including USB 2.0 ports, but it’s obviously enough for connecting a mouse. If you prefer a life without dongles, the UltraSlim Pro has Bluetooth as well.

It’s really great what Kogan has done with the UltraSlim Pro. Its display, keyboard and included storage are excellent at the AU$799 price point, and its build quality is a definite step above the usage cheap-PC fare.

Unless your usage includes video editing or gaming, the Kogan UltraSlim Pro should be high on your shopping list.

This review was typed on the Kogan UltraSlim Pro.

The Kogan UltraSlim Pro can be purchased directly from the Kogan web store for AU$799.

What I Like: Excellent display, keyboard, ample SSD storage and RAM, both USB-A and USB-C ports

What Needs Improvement: A gen-two with keyboard backlighting would be great, Name is a bit of a mouth-full.