Nanoleaf made a name for themselves with their color-changing triangular-shaped Light Panels back in 2016. Now they’ve upped the ante with the Nanoleaf Canvas; light squares with edge-to-edge illumination, built-in sound reactivity, touch sensitivity, and a whole lot more. Canvas is a beautiful piece of kinetic artwork that adds brilliant light and a sense of playfulness to any space. 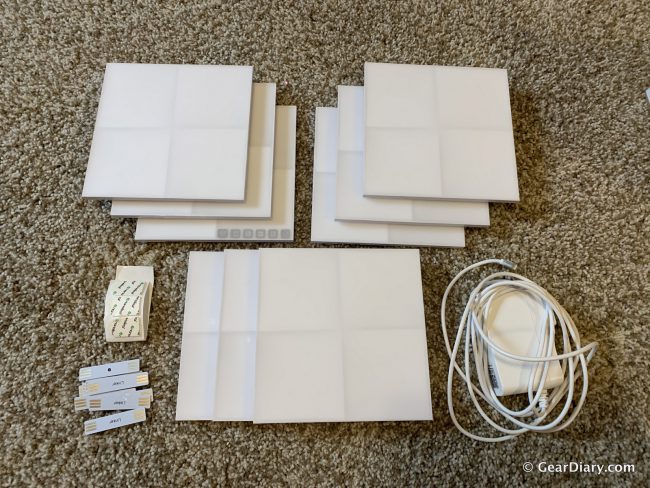 Everything included with the Smarter Kit

The beauty of Nanoleaf Canvas is not only the obvious brilliance of the 16.4 million colors within its color range but the fact that you’re really only limited by your imagination. Canvas comes with rhythm music visualizing capabilities built-in unlike its predecessor, and it’s also touch-enabled so you can actually play games with it or use swipe gestures to control it. It has Wi-Fi functionality included but also works right out of the box so Wi-Fi is not required. 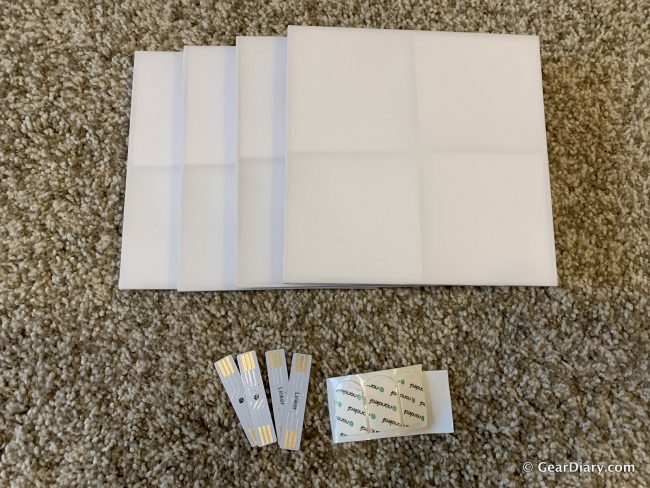 Everything included with the Expansion Pack

Nanoleaf Canvas is made up of LED squares that measure 5.9” x 5.9” with a thickness of about 0.5”. Light spreads out from the center of each panel so that the entire panel is illuminated, end-to-end; this creates a cool “pinwheel” look. Each square weighs around 6 ounces and is adhered to your wall using adhesive tape similar to 3M Command strips. The squares are connected using small pieces of conductive circuitry called “linkers.” The linkers pass power from one square to the next like a chain so that all squares can communicate. There is one “Control Square” that contains the brains of the system. The control square contains the Wi-Fi connectivity as well as the physical control buttons, however, this square can be located anywhere in your design.   Also, you can plug the power supply into any square since they’re all linked anyhow. 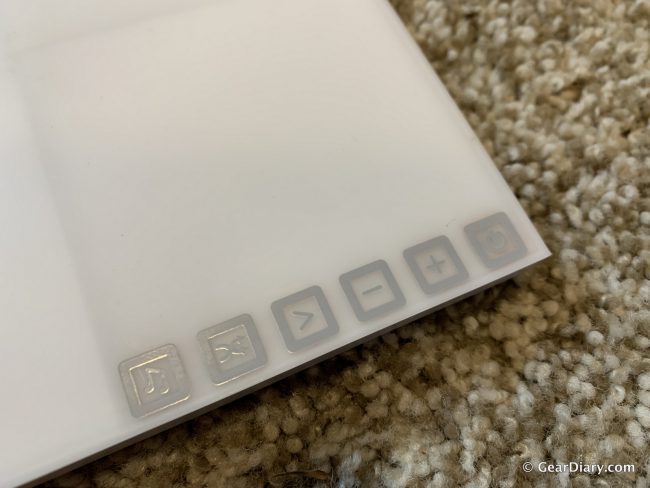 The buttons on the Control Square 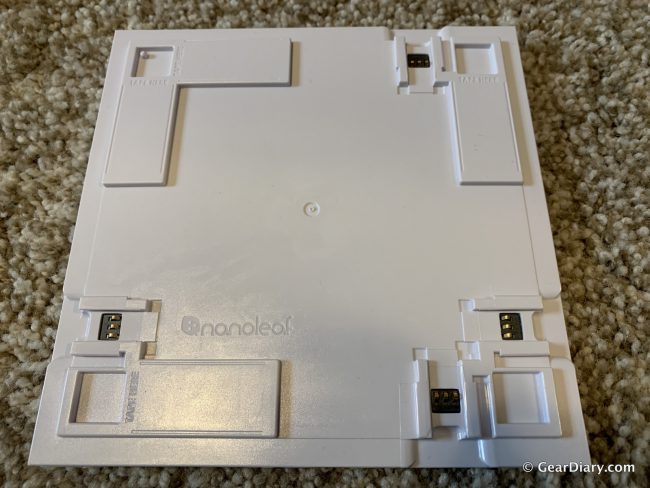 The rear of one of the standard panels

Canvas can be controlled with voice assistants such as Amazon Alexa, Google Assistant, and Siri, and is compatible with Apple Homekit and IFTTT. Nanoleaf also has a great smartphone app that allows you to set schedules for your light panels. I enjoyed having them automatically turn on at 8 am every day and turn off at 10 pm so that I wasn’t wasting electricity overnight.

The Nanoleaf Smarter Series app is really well thought out. On the dashboard, you can choose between the scenes you’ve downloaded, you can adjust the brightness of the panels, or you can select a single color with which you’d like to illuminate the panels. On the discover tab, you can search through all the different scenes that users all over the world have uploaded. You can filter by most popular or most recent, and you can choose between color, rhythm, or interactive scenes. In the explore tab, you can learn about all the different features of Nanoleaf’s products. Then in the Schedules tab is where you can create your daily, weekly, or other types of lighting schedules.

One of the best features of the Nanoleaf app is the Layout Assistant. With the layout assistant, you’re able to design your layout digitally on your phone while at the same time ensuring the linkers are aligned properly. Next, once you have a design chosen, you can use Augmented Reality (AR) to actually view the design on the wall of your house using your phone’s camera. It really helped us figure out where we wanted to install our Canvas setup.

The Layout Assistant included in the Nanoleaf app

One of the smart design choices Nanoleaf made with the light squares is that the squares have different linker connection points on each square, so you can be really creative when coming up with a design for your Canvas. I’m sure there’s a maximum number of configurations but when I was coming up with designs, the options seemed unlimited. While it did lead to some analysis paralysis, my wife and I finally decided on a fun design that looked great in our dining room. Then came installation… 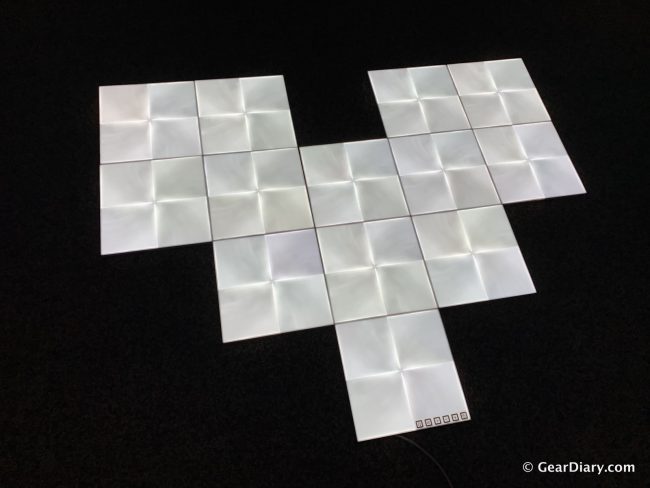 Testing out the panels for Valentines Day. Simple white. 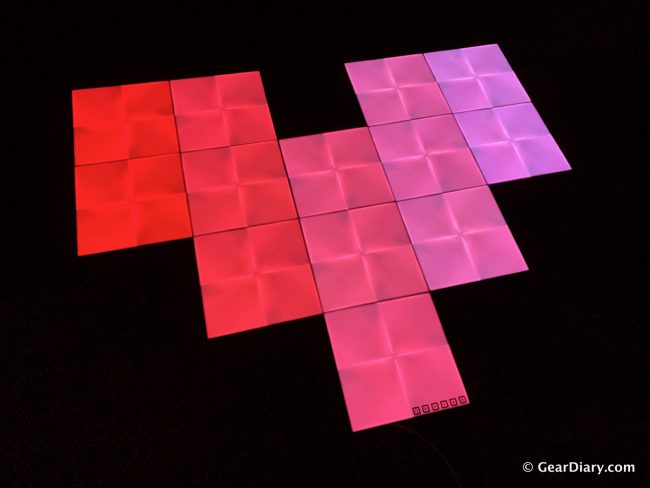 Testing out the panels for Valentines Day. Romantic scene.

Now, I won’t say that the installation of the Canvas was difficult, because it wasn’t. What I will say is that you want to be very careful during installation because there are a lot of factors at play. Not only do you want to make sure that the design is aligned and level on your wall, but you’ll also want to make sure that all of the connectors align as intended. Plus, because you’re using adhesive tape, once they’re on your wall, you don’t want to have to take them off. 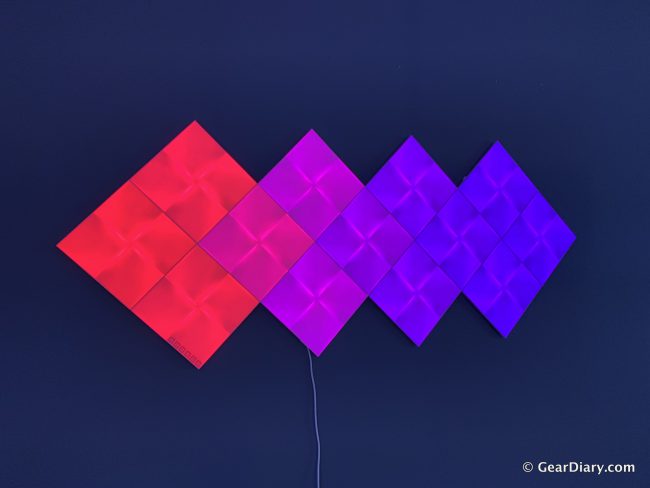 Here’s a close-up of our final installation

What we did was create our pattern on our dining room table and label each panel to ensure we were installing them the right way the first time. We carefully measured, marked the wall with a pencil, used a bubble level, installed the Canvas one panel at a time, and ended up with a gorgeous installation. The whole installation probably took about an hour for the pre-planning and an hour for the installation itself. Nanoleaf was nice enough to send an expansion pack as well as the Smarter Kit so we had a total of 13 panels.

Finally got to mount our @nanoleaf Canvas for testing! Loving the brilliant, dynamic lighting, smart features, and touch & music capabilities. Stay tuned to GearDiary.com for our full review.

We love our Nanoleaf Canvas installation. Our kids are obsessed; they love the bright colors and they have a blast changing the colors as well using the app. It’s fun to discover new scenes and change them based on my mood. Since we have two young kids, our house gets a little crazy at times, so we find that sometimes we need to turn them off just to reduce a bit of the sensory overload. However, it’s a really fun addition to our dining room, and it’s definitely cooler than a piece of static artwork. If you like the aesthetics of it, I absolutely recommend the Nanoleaf Canvas. 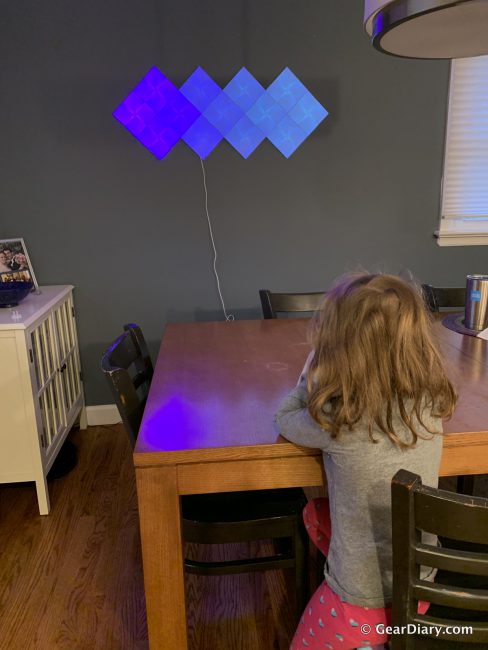 My daughter checking out the Nanoleaf Canvas for the first time

You can purchase your Nanoleaf Canvas directly from Nanoleaf at Nanoleaf.me.

What Needs Improvement: Nothing unless they can simplify the installation process