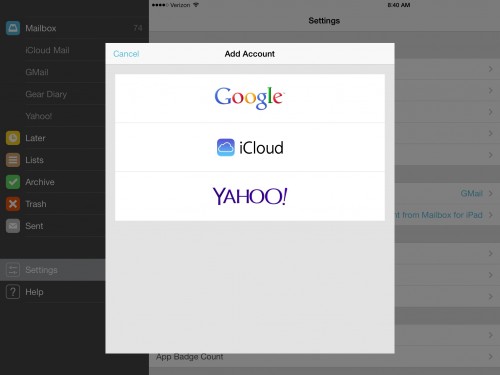 We have discussed the Mailbox App here more than a couple of times, with the initial buzz and hype quickly falling off for all of the editors. But the app has continually improved over the several months since it launched, and this week has taken a huge leap by adding support for iCloud and Yahoo! Mail accounts.

As announced over on their blog and in updates to the app, Mailbox users can now simply add iCloud and Yahoo accounts just as they would add another Gmail account. And the emails are synced and added to the universal Inbox and all normal actions now apply to email from the new accounts as well.

While I dumped mailbox pretty quickly along with everyone else, a few months later I was back for the notifications – and that was at the same time the iPad version was released … and I haven’t looked back! Mailbox now features a iOS 7 interface, and I haven’t had a random crash or missed notification in months. The ability to have most of my email in a single efficient system continues to work very well for me. None of the other editors has moved back, either for the reasons that drove them away originally, or because they are working on non-iOS platforms at this point.

Head to the Mailbox blog for more details or jump to the iTunes App Store to grab the app and try it yourself!