Developed by Avalanche Software and published by Disney Interactive Studios, Disney Infinity 2.0 has released the second “wave” of figures, power discs, and other items. This newly released wave includes Merida and Stitch in the Starter Pack and the separate figures Aladdin, Tinkerbell, Maleficent, and Donald Duck plus Hiro and Brymax from Big Hero 6. 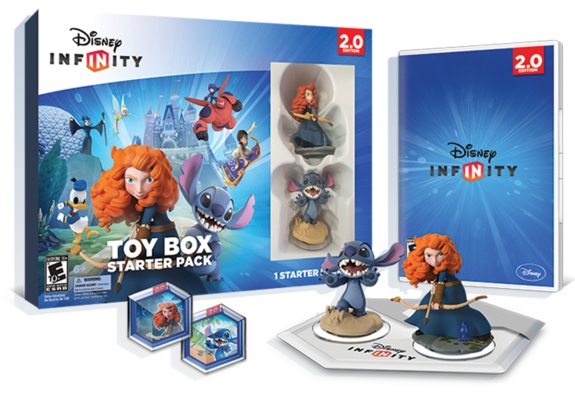 The Disney Infinity 2.0 gameplay based on playsets, discs, and set pieces all physically placed on a base pad so players can put characters directly into the game with free gameplay options in digital versions.

Just the original Disney Infinity game set pieces (46 total) are not backwards compatible in this new version — though they will unlock all associated toys — everything else can be used in 2.0.

The console versions of the game include the PlayStation 4, PlayStation 3, Xbox One, Xbox 360, and Wii U plus handheld PlayStation Vita console. No Wii or 3DS versions this time as the previous first installment (previous Wii version can be downloaded on Wii U for free). The free digital versions are available on PC, iPad, Windows 8 device and iPhone (coming soon). As before, players get web cards with each purchase character that contains a code to unlock free digital character at Disney.com/infinity.