For a time, it seemed as if every external battery was alike; they all had some sort of housing, a charging port to power up the battery and one or two ports into which a device cable could be plugged.

Over time we saw variations including having a built-in flashlight but, for the most part, they were all variations on a theme. Not so the Nomad PowerPack External Battery; this is a battery pack that stands on, and stands out, on its own. 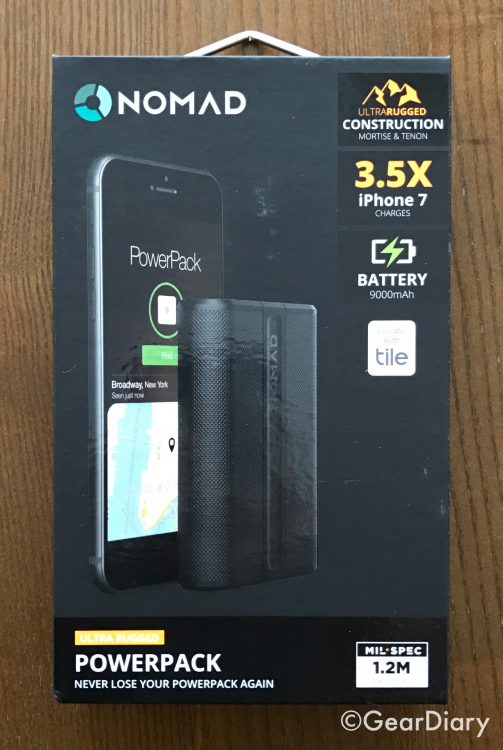 At $99.95 MSRP the PowerPack is priced as a premium product but when you take all its features into consideration that pricing seems pretty well justified. It is a rugged external battery that is designed to endure the rigors of travel, charge devices quickly, works with all devices including those equipped with USB-C and has a little something special thrown into the mix too! 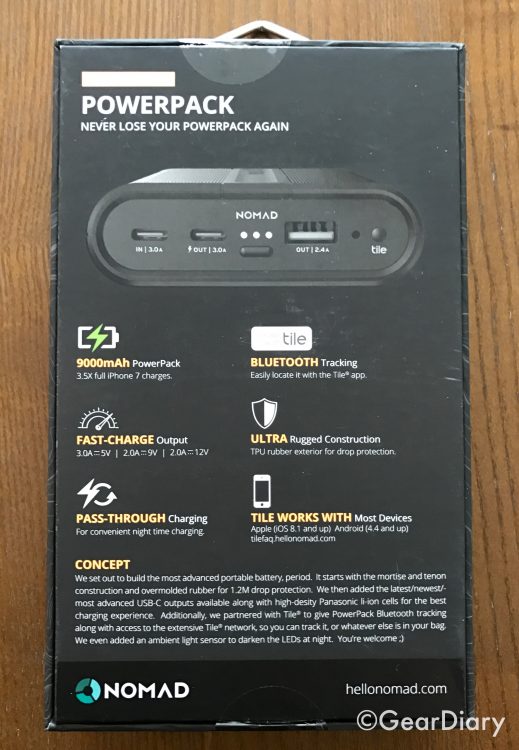 That special sauce comes in the form of a Tile-based tracking system. And while that didn’t make a lot of sense to me initially, the more I thought about it, the more I love the idea. We’ll come back to that in a bit.

We built the first of its kind rugged, trackable and yes, powerful, portable power pack. PowerPack is an advanced 9000mAh backup battery with integrated Bluetooth tracking, located with Tile®, and contains high powered USB C and A ports.

All external batteries are made the same way right? Wrong. Many external batteries are simply wrapped in some sort of a shell. It can be black or blue, yellow or white but it’s simply a shell to house the battery and the electronics. That’s not the case with the Nomad PowerPack. As Nomad notes, when they set out to design a new product that starts from the core of that product and work out… or in. In the case of an external battery that means the housing or, as they refer to it, the chassis. That led them to make the casing from a durable, polycarbonate frame with an added rugged TPU rubber exterior to ensure impact resistance. 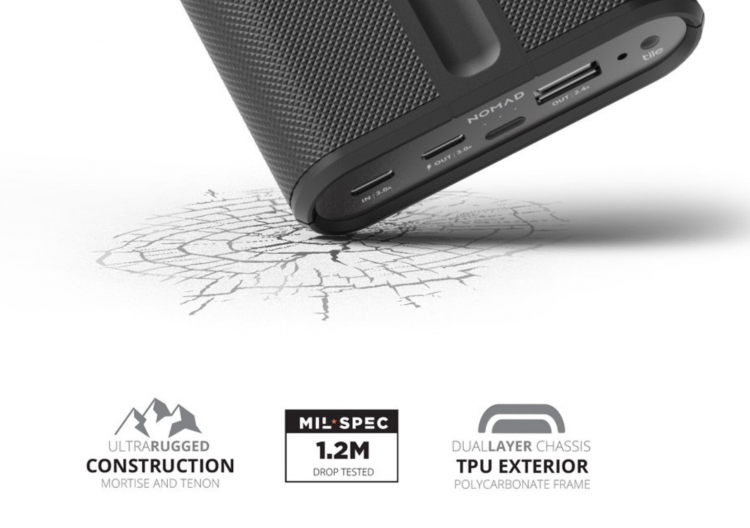 Here’s how they explain it:

We took manufacturing processes found in leading, drop-resistant, dual-material iPhone cases and comprised PowerPack’s shell out of a durable, polycarbonate frame. We added a rugged TPU rubber exterior for military-grade impact-resistance. We then looked to time-tested woodworking techniques and adopted one of the strongest building methods in use for millennia- the renowned mortise and tenon joint. This detail and precision at the core level creates a rugged product that’s designed to thoroughly withstand wear and tear, through nature’s elements and all of your adventures.

The result is a battery that feels solid, is surprisingly dense and heavy and has a nice, grippy rubber shall that makes it easy to hold and, in the process, adds a level of impact-resistance that those with butter-fingers will appreciate. It is super-solid and there is no give, creakiness or flimsiness to be found. 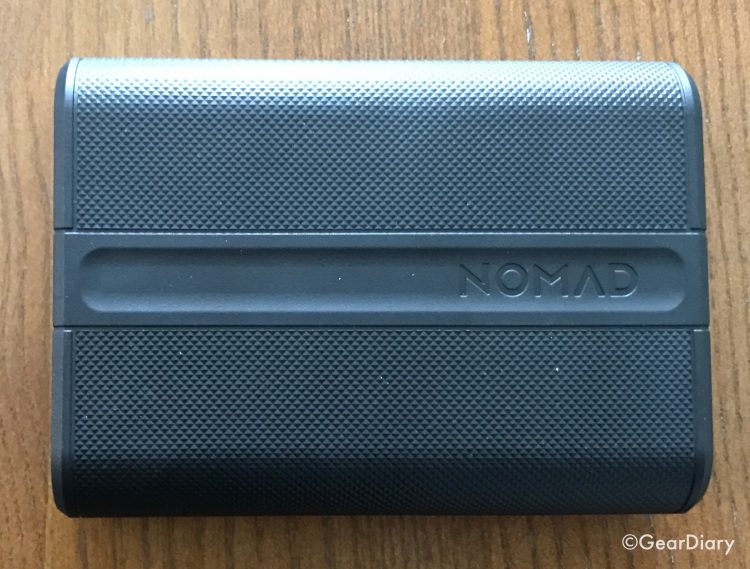 The Nomad name is embossed on the top in a manner that is subtle yet clearly present. On the business end, there are several ports and indicator lights. 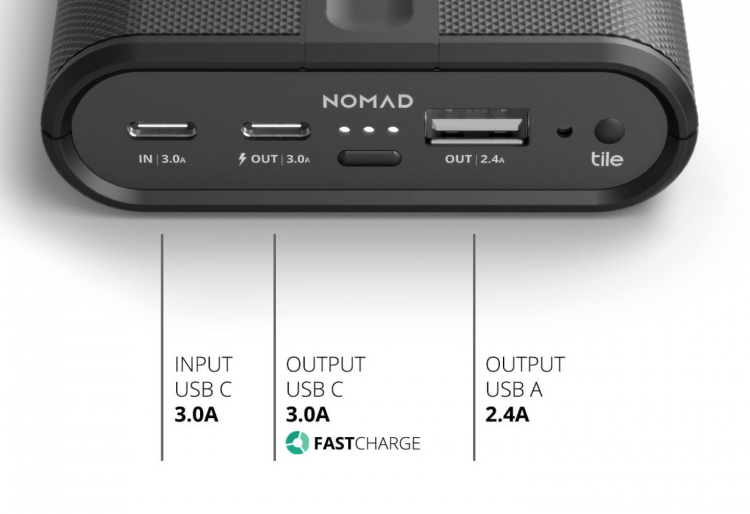 On the left is a fast-charging 3.0A USB-C port for charging the battery. (Nomad includes a USB to USB-C cable with the battery so those who are new to USB-C will not find themselves at a loss when it comes to recharging the battery.) It may seem odd that Nomad opted to use a UCB-C charging port but it makes sense on a number of levels. First, the 3.0A USB-C port guarantees the ability to charge the battery quickly. Second, considering USB-C is clearly the future, taking this approach future-proofed the battery in a rather smart, albeit early out of the gate, manner. 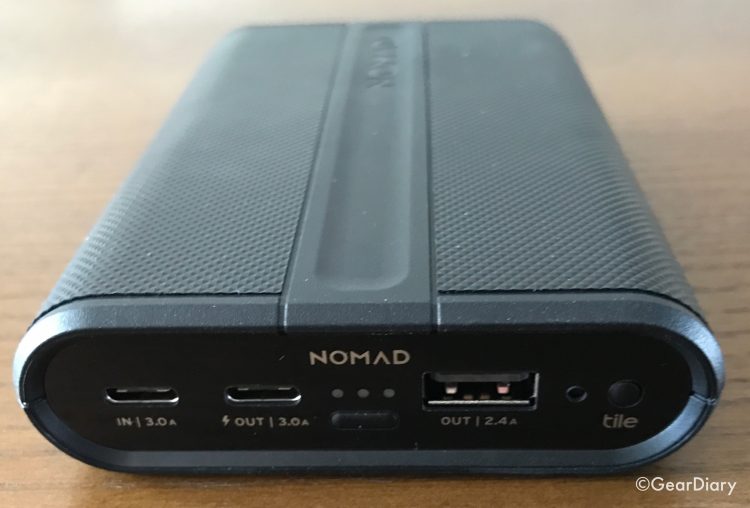 Next to the USB-C in port is a 3.0A USB-C out port. It promised quick charges to devices equipped to handle USB-C and such a quick charge. That means, for example, it is ideal for charging my Android device. The third and last port is a legacy “standard” USB A port that puts out 2.4A. It too will offer a fairly rapid charge and is ideal for juicing up my iPhone or iPad. Coupled with high density Panasonic Li-ion cells, these ports “define a new age of high-powered portable charging.”

There are three small LEDs that indicate charge status. Here to Nomad wasn’t content with taking the same old same old approach. Instead, they added AmbientIQ in order to measure the ambient light and adjust the brightness of the LEDs so they won’t shine too brightly at night. Okay, that’s not entirely accurate. Nomad didn’t ADD AmbientIQ to the PowerPack. Instead, they CREATED AmbientIQ and then added it to the PowerPack. As they explain,

You know the ordeal. When charging a powerpack at night in a dark room, the charging lights light up the whole room! We were sick of this. So we created AmbientIQ, a technology that measures the ambient light levels and then adjusts the LED status lights to be easily viewable in bright sun. But more importantly, they dim significantly in dark rooms. You’re welcome 😉 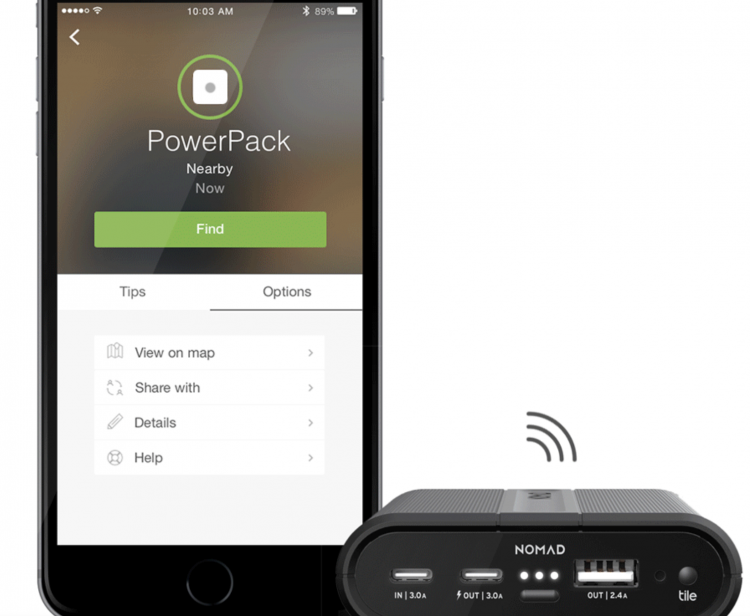 Finally, the PowerPack comes with Tile’s location technology baked in. Here’s what Nomad has to say about it.

Never lose your powerpack again: To top it off, we partnered with Tile, to give the PowerPack the power of Smart Location. With the Tile app on your phone, you can ring your PowerPack to find it if it’s hiding nearby, see where you last left your PowerPack. If it’s not where you left it, you can even get help from Tile’s huge global community of users. When a Tile user simply passes by your lost PowerPack, Tile will anonymously update its current location so you’ll be able to find it. Over half a million items are located every day with Tile. With Tile Smart Location technology integrated into the PowerPack, you’re able to keep track of your PowerPack while on the go, find it if it’s lost, and save time looking for it if you misplace it.

Now I have to admit, when I first read about this feature I could not help but wonder… who needs this? Seriously, I get that the PowerPack is almost $100. I get that external batteries are easy to misplace and lose. But seriously… do you really need Tile built into a battery? I could not help but think about the early days of Bluetooth integration when EVERYTHING was getting Bluetooth built into it. Suddenly we saw Bluetooth-enabled toothbrushes (we reviewed one!) and Bluetooth-enabled brushes (we didn’t review one.) The list went on and on and on. It seemed to operate under the concept of “Everything goes better with Bluetooth,” and one was left to ask… does it really? So, I wondered, is the just the same idea but in an updated fashion? Does everything go better with Tile? Do I really need an external battery that has Tile functionality built into it?

And I realized… Yes… yes, I do. But, and this is a huge but, I don’t think it is brilliant for the reasons Nomad offers. I don’t think Tile integration in the PowerPack makes sense in order to find the battery if you misplace it. But if you step back and consider WHERE you keep your external battery not only does building Tile into the PowerPack makes sense but it is absolutely brilliant. 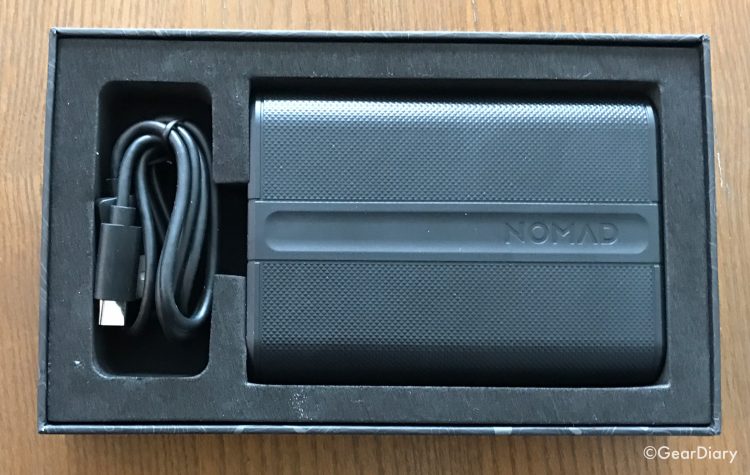 An example. At CES a few years ago, Judie and I finished a meeting in one hotel and were headed to our next meeting about a mile away. When we were almost to our destination I realized I had left my backpack in a restroom at the earlier meeting. I ran back and wildly looked for it. The bag was no longer where I left it. Fortunately, a security guard saw me running frantically, put two and two together and let me know he bag had been found and had been taken to security. Had I had a PowerPack in my bag however I would have immediately known where my bag, and a few thousand dollars worth of gear, were. THAT”S the brilliance of the PowerPack’s Tile integration. And THAT is why every other external battery I have just became obsolete.

So what do I think of the Nomad PowerPack? I’m a huge fan. It is rugged and designed to last. That’s why it has a two-year warranty. It has a 9000mAh capacity which is more than enough battery for most situations. It charges via USB C and a 3.0A input so it can be refilled quickly. It has both the new USB C and the legacy USB A type output ports so it will work now AND is future proofed better than any battery I have seen. It is Tile-enabled and is compatible with the Tile app for both iOS and Android devices so you can keep track of a lost PowerPack AND whatever you were using to carry the PowerPack. And it has AmbientIQ so it won’t keep you up at night when you are charging it in your hotel room. In short, other than having cables built into it, this battery has it all. And then some. Check it out here.

What I Like: Abundant capacity; Fast charging and fast charges; USB C and USB A ports; Adaptive indicator lights; Tile integration; Made to endure serious use

What Needs Improvement: Would have been great if the PowerPack had a cable built into it although I understand not doing so makes it more universal