Ever since I finally received my standing desk by Fully, there was one other item that I knew my setup needed to make it complete: the OWC Thunderbolt 3 Dock. 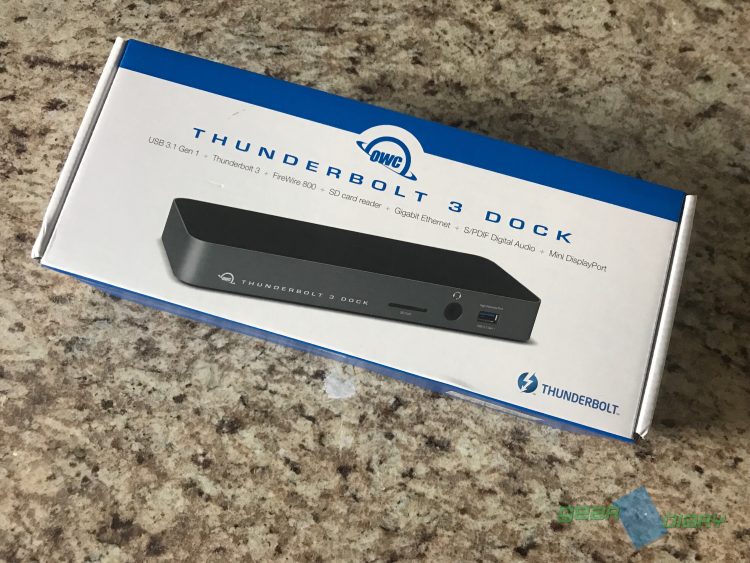 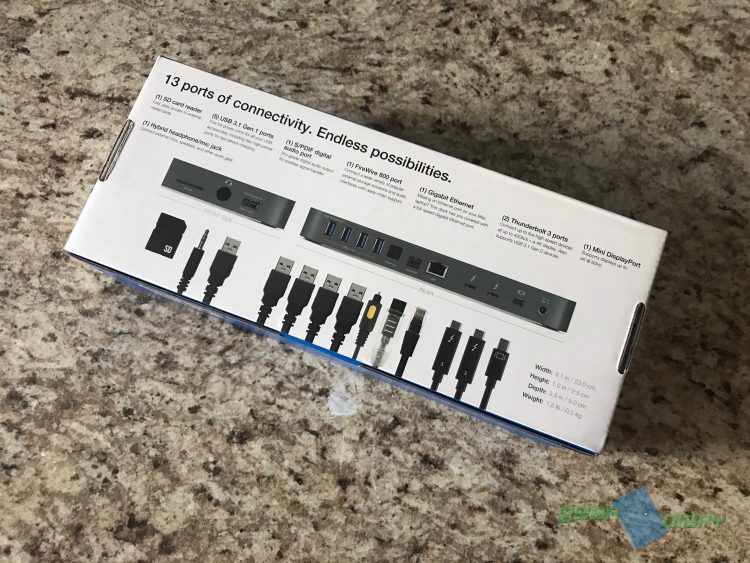 Promising to deliver more connectivity, power and charging capability than the previous Thunderbolt 2 Dock, the Thunderbolt 3 Dock is a “what can I not do” device that gives your Mac, or Macbook so much more functionality. Including the dock itself you receive an 18-inch Thunderbolt 3 40b’s USB Type-C Cable, an external power supply and power cable for connecting to a power source, and obviously all of the literature and quick start guides. Here are a bit more specs before I dive into the Thunderbolt 3 Dock:

* FireWire 800 port not supported on Windows at this time.

I’ve been using the OWC Thunderbolt 3 Dock for the past month, and trust me, there’s not much that this thing can’t do. Winner of NAB’s 2017 Best of Show”, it’s been recognized for its originality, and it’s innovation, cost efficiency, and performance in service the industry. It wins my personal award for honestly doing everything my 2016 MacBook Pro didn’t come equipped to do. Let’s start with the fact this dock has 13 ports, which is more than anyone can truly ask for. I have to admit though, I truly could’ve done without the excessive branding on the front of the Thunderbolt 3, and it clashes with the sleekness of the black and aluminum design but the premise here it to make a functional dock that serves every need, so I won’t harp too much in that regard. What I will mention is that the device itself does cost $299, which to some might be very expensive considering the one thing you’ll notice at first glance is it doesn’t come with an HDMI port. This could be make or break for some, but not others. 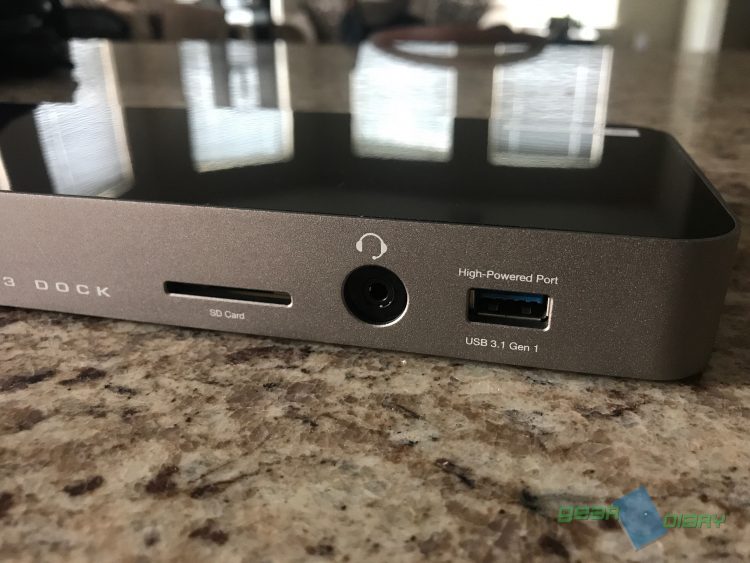 Having a thinner, lighter MacBook Pro comes at the expense of having four USB-C ports, taking away functional elements like charging your iPhone, plugging in the SD card from your camera, and in some cases, being able to set up presentations without endless dongles and adapters. OWC hopes to rid you of that headache by giving you on the front: An SD Card reader, a headphone jack, and an individual, high-powered USB 3.1 port which does support compatible devices that do Quick Charge. 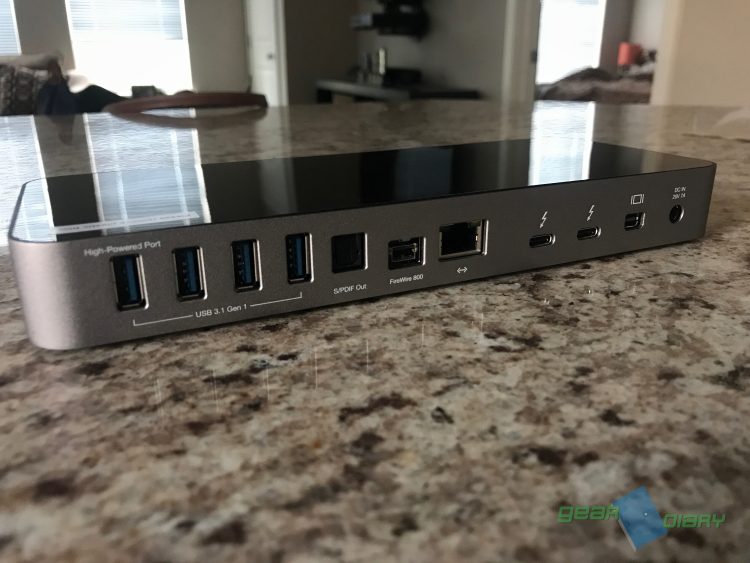 On the rear of the Thunderbolt 3 Dock is where you’ll find the heart of it all, which offers you four more USB-A 3.1 ports, an S/PDIF digital audio port, a port for your FireWire 800, and a Gigabit port, all which sit next to two Thunderbolt three ports, which you can use to connect your MacBook Pro to an external monitor that has a USB-C or Thunderbolt 3 Display,. At the end is where you get the Mini DisplayPort, and the adapter plug-in so you can source power from an outlet. 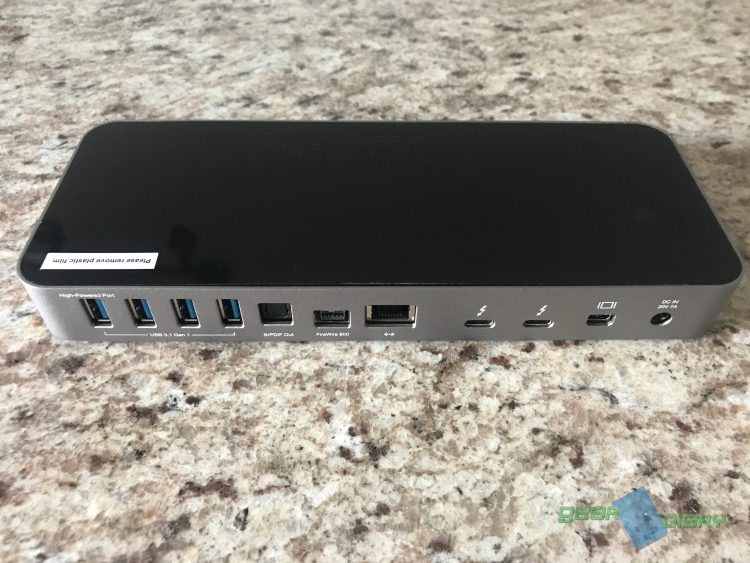 Ironically there’s no power switch to allow you to manually turn it on or off, but you do receive an indicator that sits at the bottom of the Thunderbolt 3 Dock to let you know that it is indeed on. Since I have a black desk it’s a bit easier to see at night versus in daylight. 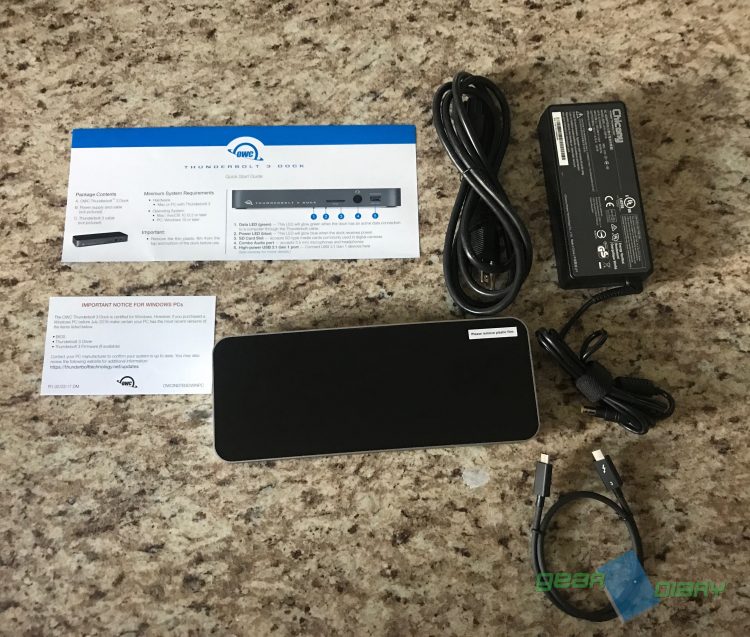 The fact that the Thunderbolt 3 Dock by OWC literally does everything that I would need it to possibly do for my day-to-day workload is great, but of course, there are some caveats. For starters, the dock itself only runs at 60-watts. Now sure, you’d think that would be good considering all of the ports that it does supply, however, if you are a photographer or videographer, who may have multiple items plugged into one of the various outlets, on top of needing to charge your laptop, the charging of your MacBook Pro is going to be undoubtedly slower that what you would get with just using Apple’s standard 85-watt power brick that they’ve included in the MacBook Pro box. After plugging the OWC Thunderbolt 3 Dock in at 25% while using five of the available 13 ports, I noticed a significant difference in the way not only my device’s battery got charged, but the MacBook Itself. I reached out to OWC regarding if the devices or the Macbook received charges in a particular order, but was unable to get a for sure answer. 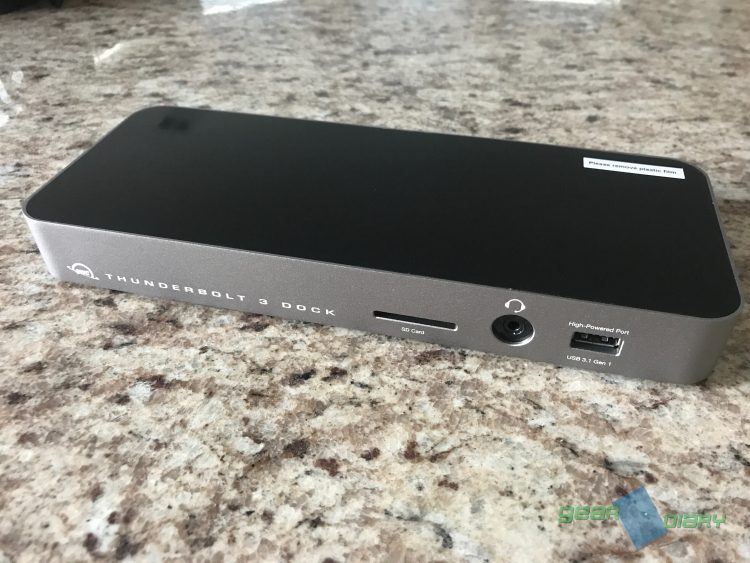 What makes the Thunderbolt 3 Dock by OWC special, however, is that not only is the dock small enough in footprint to toss in a backpack with your MacBook Pro, but it is completely functional. I noticed with the dongles and adapters I used previously, when I have a case on my MacBook Pro, I’ve noticed that not only do they get hot, but connectivity was hit or miss depending on the way the dongle sat inside of the USB-C port. With the OWC Thunderbolt 3, I have yet you have any disconnections, especially when transferring documents from a hard drive, SD Card or any other variant. One thing that I’ve also noticed is that a lot of people online has issues with a hissing Thunderbolt 3 Dock, but luckily I have not run into this just yet.

If there were two things I could change, obviously the first would have to be the outrageous logos and labels as I don’t truly find the ones on the front necessary at all. Secondly, for a device that measures in just over nine inches, I would like to think that they could’ve found a better way to possibly make the output 85-watts. 60-watts is honestly not going to cut it for someone who plans on traveling with multiple devices, and charging their devices all through the Thunderbolt 3 Dock, including yes, the MacBook Pro. Maybe overnight this might work, but if you have a lot of work to do, I feel as though it may not cut the mustard. Especially at close to $300.

Outside of those two, however, the dock itself is actually really nice, and Although I only use one monitor to connect externally with other than my MacBook I could see the potential need for two Thunderbolt displays unless you plan on daisy chaining dual monitors. Again, this is an isolated problem for a small group of individuals. But if you’re looking for a dock that does it all, and gives you all of the functionality that Apple stripped away from you (at a price), look no further than OWC’s Thunderbolt 3 Dock.

For more information, you can head over to OWC’s site today.

What I Like: Lightweight and can toss in bag; A port for every daily function

What Needs Improvement: The Price tag is high; Lack of HDMI port