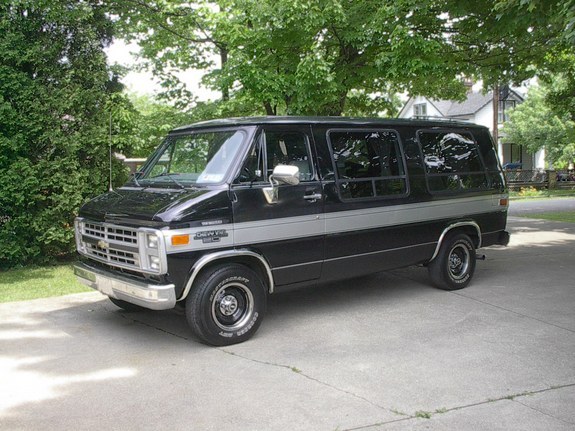 Two weeks ago, the tie rod on my 2002 Dodge Ram 1500 conversion van broke off (I was parking, so I was safe). After towing it to a mechanic, it was deemed too rusty to repair.

And in the time since, I have spent countless hours scrolling through Craigslist and the Facebook Marketplace trying to find the perfect van. Most of them have rusted out bodies or terribly filthy interiors. Others have been massively customized and are selling for upwards of ten grand.

The one impeccable specimen I found within my price range looked great with a test drive, but when I had a mechanic look at it, he uncovered a bevy of major issues.

Looking through the listings, it strikes me that my trouble is due to a massive culture shift. While it used to be the go-to vehicle for family road trips, we’ve turned our backs on the conversion van en masse, abandoning them to broke musicians and less-than-savory types.

As a broke musician myself, I still appreciate a good conversion van like few others. Here’s why the conversion van remains the perfect family vehicle.

Almost every SUV and crossover on the market boasts about how roomy they are.

But whether they’ve got seven seats or nine seats, there isn’t a single vehicle on the market that can compete with the spaciousness of a conversion van.

Are your kids always complaining about how their siblings are getting in each other’s space? Put them in the massive captain chairs of a conversion van. They’ll barely be able to reach each other. Is your teenager going through that moody phase where they can’t stand to look at you? Put them in the back seat, and they’ll barely notice you’re there. They can even fold that seat down to a bed so they can keep sleeping.

A Living Room On Wheels

The classic conversion van was not only spacious: it was also relaxing, like a mobile living room. It was almost like you dropped two easy chairs and a sofa in a car and attached seatbelts. Especially if you were lucky enough to have swiveling captain chairs. One van I owned even had a coffee table between the middle sets!

And then, there’s the TV. Back before we all had Netflix on our smartphones, the TV and VCR combo that came standard with most conversion vans was most luxurious on-road entertainment available. And when you consider all of the overhead storage areas that many of the high-top vans had, there was plenty of room to store an extensive library of videotapes.

Some vans even had an onboard antenna so you could watch live television while on the road. I even remember sitting in my dad’s van and watching Saturday morning cartoons during my little sister’s soccer games.

Combine this with the velvet curtains that came standard on most vehicles, and you’ve got the finest entertainment room the 90s had to offer—especially if you augmented the VCR with a Nintendo 64.

And if you wanted some more productive entertainment, turn on your individual reading light and take out a book. Try turning on the dome light an SUV without your dad yelling at you.

When I was a kid, any time someone talked about taking a family road trip in a sedan, there was a tinge of pity included. Why would anyone want to be stuffed in such small quarters with their family for so many hours?

But that same trip in a conversion van was almost enviable. And that’s not restricted to family trips: it doesn’t matter if you’re visiting the Grand Canyon with some college friends in a van you found on Craigslist for $800 (a true story) or camping next to the beach with your spouse, a conversion van is the perfect vehicle for adventuring around. With those velvet curtains and bed-ready back seat, you don’t even need to bring a tent.

If you’re a frequent explorer, a van could be a more affordable option than an RV. With a few modifications and a bit of elbow grease, you can convert your everyday van into a luxury camper. Just make sure to remember a no-freeze water hose if you plan on taking any northern ventures.

Since I’ve been driving, I’ve owned two full-sized conversion vans, and those vehicles have served a multitude of purposes.

The aforementioned Craigslist van hauled me and my friends across the North American continent before I used it as a delivery van for a catering company. When my wife and I do art shows, we would take out the seats and load all of our inventory into our Dodge and drive it out in a single trip—and that let us bring far more inventory than if we were limited by our Honda Fit.

If my band were to play out-of-town with a smaller vehicle, we’d have to find a trailer and ride in much closer quarters. But with our van, we could just lay down the back seat and ride comfortably, even with all our gear in the back—and we have a lot of gear—my pedalboard alone is pretty big.

Whether you’re driving large groups of people across town, taking road trips with the kids, camping through a tour of America’s tourist hot spots, or hauling your band from show to show, the conversion van can do it all.

So it might be a little fuel inefficient. That’s a small price to pay for a luxurious, comfortable, versatile vehicle.

And even though there are precious few conversion vans in good shape still on the road, I’m holding out hope that the perfect van is out there. If not, I might have to resign myself to (shudder, shudder) a minivan.