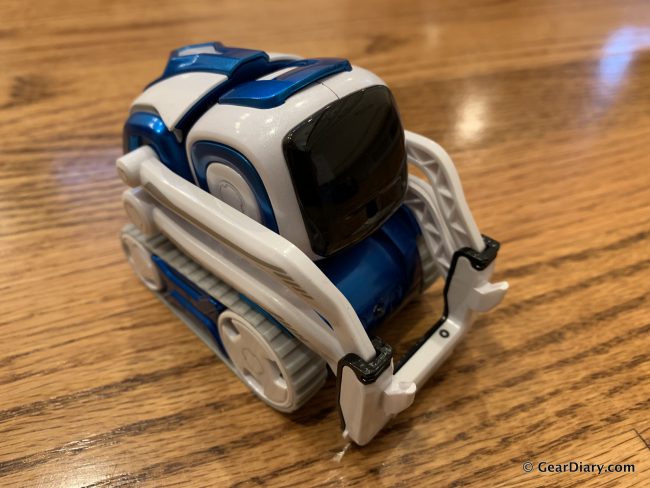 Anki Cozmo is a friendly robot with a one-of-a-kind personality. Cozmo is playful, can perform tricks, sing songs, and explore his environment. He can even recognize your face! You can also take care of him like a pet when he needs to be “fed” and “tuned up.” My kids are obsessed with Cozmo and yours will be as well. 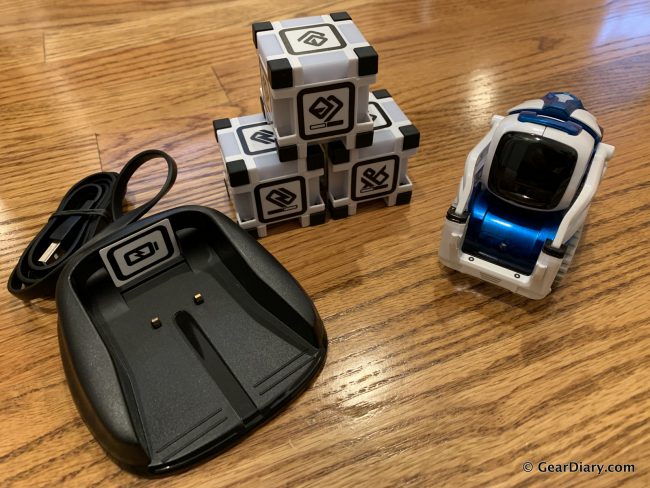 Everything included with Cozmo

Cozmo is made out of over 300 parts that Anki has drop-tested and designed to last. He uses four motors and over 50 gears to move around and discover his surroundings, similar to the Mars rover. He uses a 30 fps VGA camera to see you, get to know you, and remember you. He uses a 128×64 pixel resolution facial display to show you how he’s feeling with very well designed animations. He uses an onboard CPU to evaluate his surroundings and think of ways to taunt you during a game. Cozmo is so high-tech, you should think of him as a supercomputer on treads. He also comes with three Power Cubes that have color-changing LED lights in them as well as accelerometers so they know when they’re being moved or tapped. 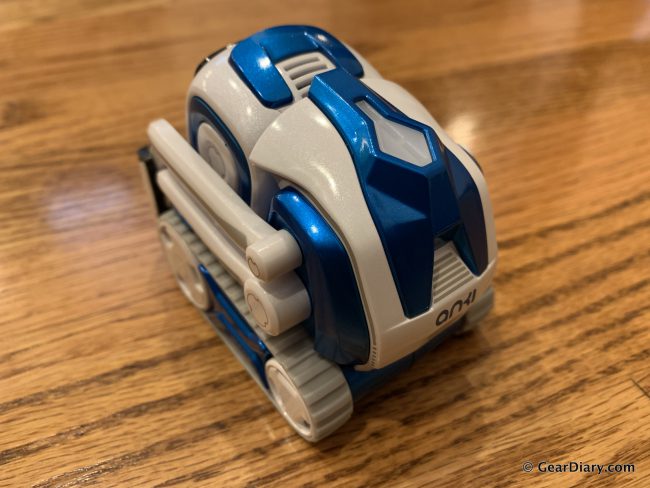 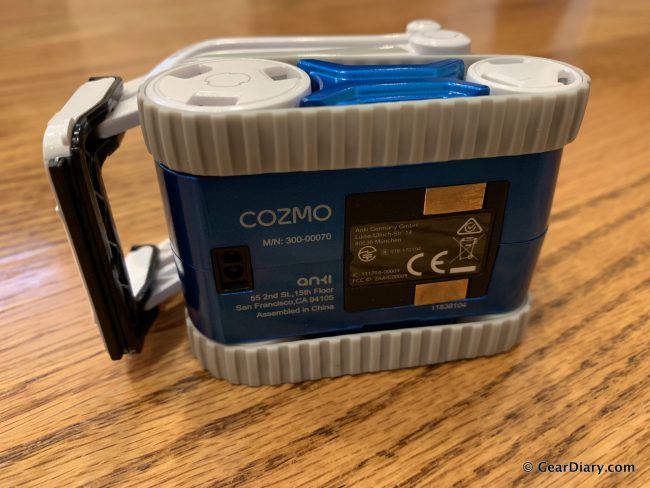 Cozmo is controlled by a connected smartphone; that’s where you’ll select activities, feed Cozmo, and tune him up. The app is very easy to use and even includes sample videos to show you how to play some of the games. There’s a ton of content within the app and it feels like there’s enough content to last your kids for years of growing up. As an example, we played with Cozmo with my daughter when she was 3 and she was able to interact and play some of the simpler games. But now that she’s 4, she’s able to take on some of the more complicated games and enjoy Cozmo in a more mature way. I can see that continuing, as she gets older, as she may get into the coding feature.

Sound on! Here’s @anki Cozmo performing for us. He’s a fun gadget/robot/friend who can play games, do tricks, perform, recognize faces, sing songs, and even teach kids to code! Stay tuned to GearDiary.com for our full review!

Cozmo’s different modes are fun to play around with. Not only are there games to play and songs to sing, but you can also use Explorer Mode. In Explorer Mode, you’re able to see the world through Cozmo’s eyes and control his movements like a remote-controlled vehicle. You can control his arms, his head angle, and his treads. Another fun mode is Cozmo’s Free Time, which allows Cozmo to play around on his own while you watch through his eyes in the app. Within the Free Time mode, you can see what’s going through Cozmos’s mind while he’s exploring his environment on his own. 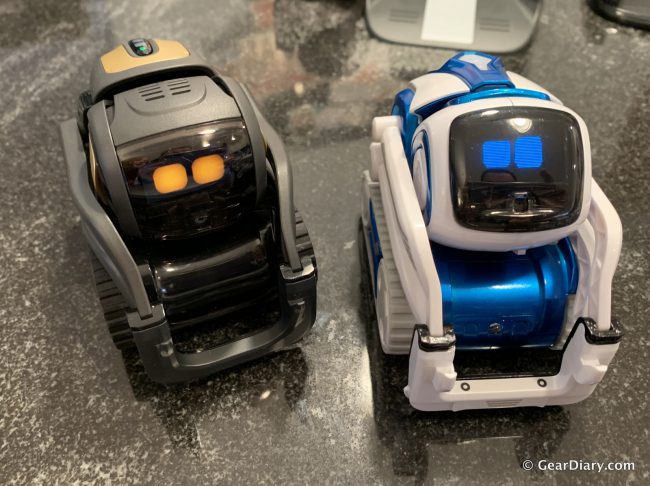 Cozmo next to his brother, Vector 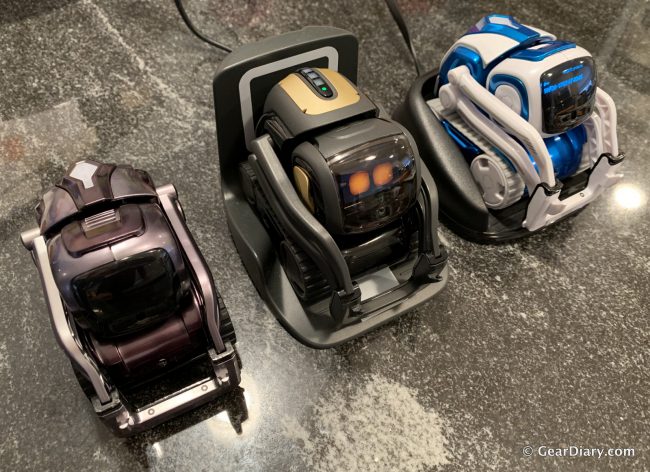 Let’s talk about the games. Cozmo’s a really fun opponent. There are a few main games that Cozmo loves to play (and loves to beat you at.) First, there’s Quick Tap: a game where both you and Cozmo choose a Power Cube and when the colors on the cubes match, you want to be the first one to tap your cube. Next is Memory Match: think of it like the old Simon game, you try to remember the pattern of flashing colors on the cubes and tap them in order. The third and final main game is Keepaway: you take one cube and tease Cozmo with it by moving it slowly towards him. He will try to pounce on it so you need to take it away before he taps it. What’s neat about this game is that he’ll sometimes fake you out so you aren’t always sure when to take the cube away. Check out this video of a Keepaway match:

We had some fun this morning playing games with @anki Cozmo! Here he is playing keepaway.

The main games aren’t the only games, however, as Anki has done a good job of continuing to put out additional content over the life of Cozmo. Once you play all of the main games, you can unlock new mini-games to play with Cozmo and there are new mini-games added each month!

Another fun mode is Tricks. Cozmo has a number of tricks he can perform and they’re a lot of fun to watch. You can ask him to sing a song, do a fist bump, or pounce on your finger like a cat. He can also build a pyramid with his Power Cubes, pretend to work out with the Power Cubes, or roll his Power Cubes around. It’s a neat feature, and fun to show off his skills, but there isn’t a lot of depth to it.

Some of the tricks Cozmo can do

With the Code Lab feature, kids can learn basic coding concepts by snapping together blocks that correspond to Cozmo’s actions. In the Sandbox, you can complete challenges to customize your creations and grow your skills. In the Constructor, Cozmo’s intermediate coding program, you can create more complex projects with unlimited possibilities. For instance, you can design games on Cozmo’s display or code an interactive dance party.

My only real complaint about Cozmo is that he’s tied to a smartphone. The only way to choose activities, games, tricks, etc. is to use a connected smartphone. We limit our kids’ exposure to screens, so this is definitely a concern for us. We’d love it if Cozmo had similar functionality as Anki’s Vector where it doesn’t require a smartphone for use.

Overall, I think Cozmo is a ton of fun and that’s confirmed by my kids’ love of him. They ask at least once a day to play with Cozmo and can’t seem to get enough of him. While they’re still on the young end and don’t take advantage of all of Cozmo’s features, I’m sure they’ll grow into his more advanced activities. Cozmo is extremely well designed, as evidenced by his lifelike personality, facial animations, and sounds. He feels like part of the family and we’re happy to have him.

You can purchase your very own Cozmo directly from Anki at their Cozmo Shop. You can purchase a classic Cozmo in red and white, or find a limited edition color scheme like Interstellar Blue, as seen in this review. They also have a “Create with Cozmo” book to help your kids learn basic coding concepts, a carrying case, a tread pack to change Cozmo’s tread colors, and a bundle that includes all of the above.

What I Like: Incredibly well designed; Fun; Interactive; Impressive tech

What Needs Improvement: Remove the requirement of a smartphone at all times and we’d use it a lot more often